Here at Addgene, we often refer to plasmids as lab or experimental tools. They certainly are very handy in research, but where did these tools come from and why do they exist in nature? Read on to learn more about environmental plasmids, and how they’ve helped us develop molecular biology tools for the lab.

Plasmids found in nature often give their hosts beneficial traits that allow them to survive in competitive environments. Plasmids derived directly from the environment are sometimes called ‘natural’ plasmids, to distinguish them from the modified versions we usually work with in the lab. Horizontal (or ‘lateral’) gene transfer occurs when genetic material is passed between organisms by mechanisms other than reproduction (vertical gene transfer).  Small, mobilizable genetic elements like natural plasmids enable horizontal gene transfer, allowing beneficial traits encoded by these plasmids to spread rapidly throughout the environment. Indeed, plasmid transfer between organisms is one of the most common methods of horizontal gene transfer in nature. These ‘extra’ pieces of DNA can be extremely useful for survival in the crowded and competitive natural environments outside the petri dish.

Although we usually think of bacteria when we think of plasmids, both Archaea and Eukaryota can also harbour these circular, extra-chromosomal, double-stranded DNA passengers. For example, a variety of high-copy number yeast vectors have been derived from the natural yeast 2-micron plasmid.

Plasmid transfer outside the lab

In the lab, we use chemical transformation, electroporation, and transfection to put plasmids into cells. In nature, the two main routes of plasmid transfer are conjugation and natural transformation. Conjugation occurs when a sex pilus extends between two bacteria, allowing a copy of plasmid DNA to travel from one cell to another.

DNA can also be passed between bacteria by bacteriophages, the viruses that infect bacteria. Bacteriophage genomes can exist in bacterial cells as extrachromosomal plasmids known as a prophages, or they can integrate into the host chromosome using DNA recombination systems. Some of these systems have been modified for use in genome engineering, including the Cre-lox system from the P1 phage of E. coli.

Fun fact: There is evidence that lightning can also promote gene transfer in soil bacteria.

What actually constitutes a “beneficial trait” encoded by a plasmid? In addition to the genes required for transfer and integration, natural plasmids can also convey a variety of functions that allow their host organisms to thrive in competitive environments. The genes encoding these functions form the basis of many molecular biology tools! 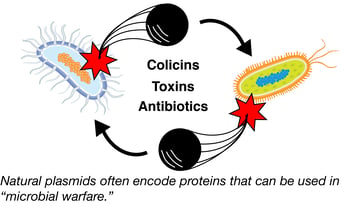 One way to triumph over your neighbours is to eliminate the competition via the production of toxins and antibiotics. Fungi such as Penicillium produce bacteria-zapping compounds like penicillin, and bacteria in turn possess plasmid-borne toxins like colicins and subtilisins to kill other bacteria in the area. Of course, the next logical step in this microbial arms race is to develop resistance to these chemical weapons.

Conveniently, plasmids carrying genes for the production of bacterial toxins like colicin also often carry the necessary resistance genes so that the producer is immune. Resistance to antibiotic compounds produced by other species (like those pesky Penicillium) can be passed around on plasmids like a “get out of jail free card.” These plasmids were historically called R (resistance) plasmids. While antibiotic resistance-mediated selection is indispensable for cloning work, the transfer of plasmids carrying these genes between bacteria can also have serious implications for public health, as described in our recent blog post on antibiotic resistance.

There are less aggressive ways to survive in competitive environments, however, such as taking up an unoccupied niche. Some organisms manage this by utilising recalcitrant or unusual substrates that other organisms can’t use. Others develop resistance to toxic substances such as heavy metals or pesticides, enabling them to survive where others can’t. To conserve energy, these specialized degradative capabilities are often tightly regulated to be active only in the presence of the target compound. These systems are a gold mine of parts for synthetic biology, especially when combined with natural inducible expression systems that allow tuning of metabolic pathways.

Similarly, conditionally-expressed plasmid genes can give bacteria the ability to invade environments found on and in living organisms. For example, there are plasmids that allow Salmonella and E. coli to infect the human intestine, and other plasmids that allow Agrobacteria to infect plants. These are known as virulence plasmids, as they help make an otherwise harmless bacterium pathogenic. While these plasmids can be dangerous to the health of the host organism in a natural setting, they also provide researchers with new means to deliver DNA and other molecules to host organisms. For instance, vectors derived from the Agrobacterium Ti virulence plasmid are now used routinely in biotechnology to transform plant cells.

We’re only just breaking the surface of the environmental plasmid world in this post. It is the great diversity of natural plasmids and their functions that has enabled researchers to develop and deposit the many plasmid tools available in the Addgene repository. To learn more about some other common plasmid features such as origins of replication and promoters, check out our other Plasmids 101 posts and keep an eye on the Addgene blog as scientists continue to mine environmental plasmids for new and exciting molecular technologies!