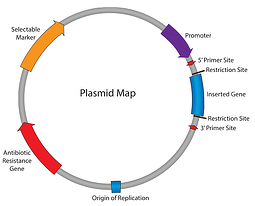 Once you've gotten to know what a plasmid is in general, it's time to take a look at some of its parts. Elements such as the antibiotic resistance gene and the origin of replication are necessary to replicate plasmids and make sure the cells maintains it. Here, we'll cover the promoter, which is necessary for getting the plasmid express our gene of interest. This element is responsible for initiating the transcription of your insert into RNA.

In practice, the term "promoter" describes the combination of the promoter (RNA polymerase binding site) and operators (response elements). Promoters are about 100 to 1000 base pairs long and found upstream of their target genes. The sequence of the promoter region controls the binding of the RNA polymerase and transcription factors, therefore promoters play a large role in determining where and when your gene of interest will be expressed.

RNA is transcribed from DNA using an RNA polymerase (RNAP). In bacteria this is done by a single enzyme; however, eukaryotes have muliple polymerases which are each responsible for a specific subset of RNAs. To gain this specificity, the eukaryotic RNAP can recognize and bind to specific promoter elements. This means that the promoter present in your plasmid backbone must to be compatible with the type of RNA that needs to be made: if you want mRNA (for gene expression) you need to use an RNAP II promoter, whereas small RNAs (such as shRNA) are transcribed from the RNAP III promoters. This post features promoters for general RNAP II and RNAP III transcription; however, using viral LTRs as RNAP II promoters is commonly employed in lentiviral and retroviral constructs and we will discuss these in a future post on viral vector parts.

Aside from choosing a promoter based on type of RNA transcript, you will also need to make sure your plasmid has a promoter suited to working in your host organism. Because transcription machinery differs between cell types or organisms, promoters must be similarly variable. Bacterial promoters only work in prokaryotic cells and typically only in the same or closely related species from which they were derived. Similarly, the various eukaryotic cell types (mammalian, yeast, plants, etc) require unique promoters and there is very little crossover. Generally speaking, promoters in bacteria are less diverse and complex, having fewer parts than those in eukaryotic cells. Some promoters are constitutively active and on all the time while others are more carefully controlled. Regulated promoters might act only in certain tissues or at certain times in development or there may be ways to turn them on or off at will with a chemical, heat, or light. In the cell, promoters themselves are controlled by still other regulatory factors: enhancers, boundary elements, insulators, and silencers; however, some "leakiness" of transcription may occur. This is normally not a big issue for cells, but it may confound research results or even kill your cells if your gene of interest is toxic. To combat this, scientists have created synthetic promoters, which typically include some combination of other promoter elements, and tend to be more tightly regulated.

Common promoters for eukaryotes and prokaryotes

We have included two reference tables below listing some of the most common bacterial and mammalian promoters. These lists is by no means exhaustive, but should be a good place to start when trying to pick your perfect promoter!

Although this list is a great place to start, the tables above do not delve into the tissue or development-specific promoters available to scientists. Plasmids are oftentimes put to therapeutic uses, and in those cases it's important to identify the right tissue-specific promoters as described by researchers at the NIH here.