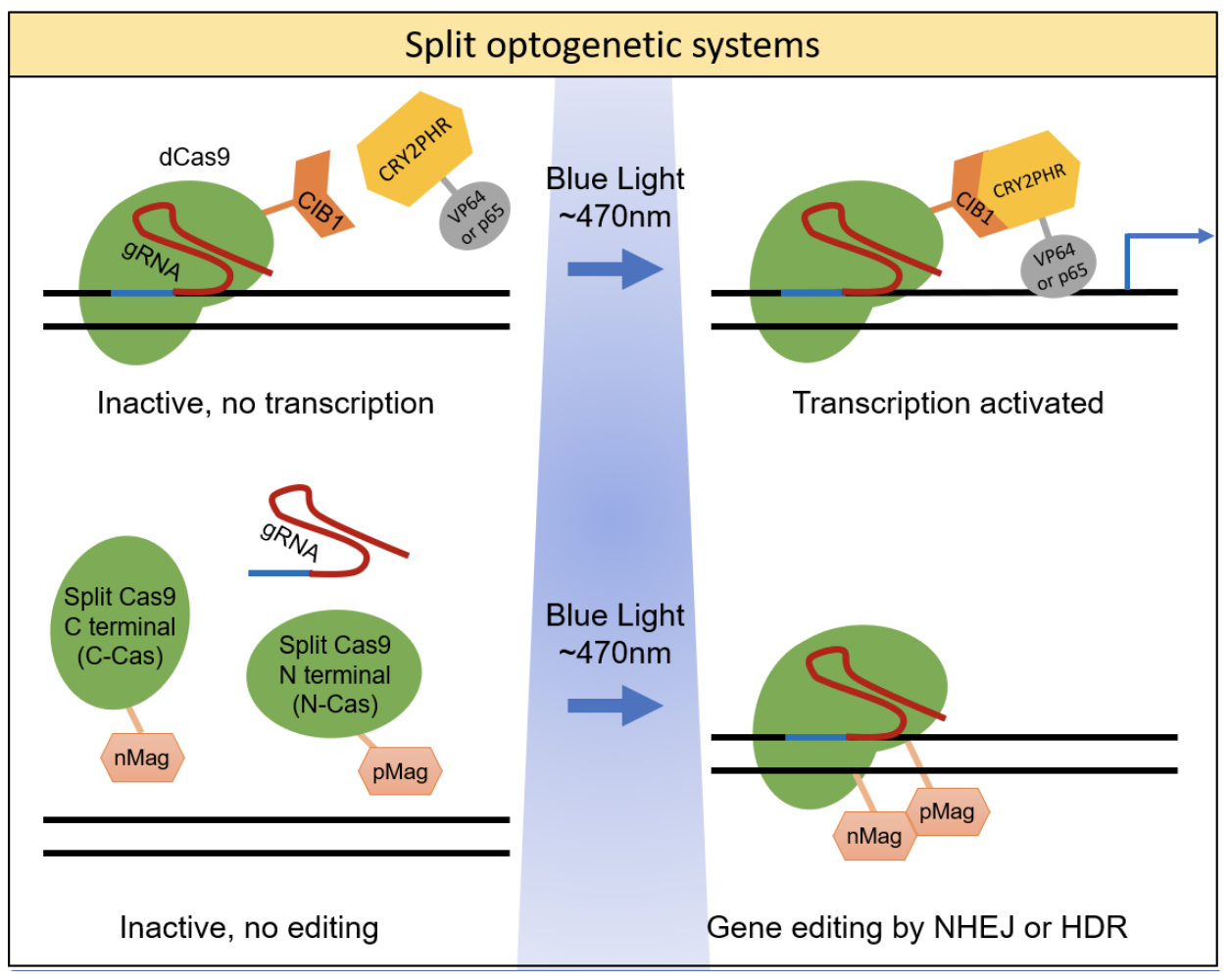 Scientists around the world have been making major improvements to CRISPR technology since its initial applications for genome engineering in 2012.  Many of these advances have stemmed from the goal of reducing off-target Cas9 activity. The use of nickases, prime editing, anti-CRISPR proteins, and other techniques all aim to improve targeting specificity or reduce the duration of Cas9 activity.

The field of optogenetics is renowned for enabling precise temporal and spatial control. Optogenetics uses genetically encoded tools, such as microbial opsins, to control cellular activities using light. In 2015, scientists combined CRISPR and optogenetic techniques to develop a variety of photoactivatable CRISPR tools. These tools allow scientists to use light to externally control the location, timing, and reversibility of the genome editing process. Read on to learn about the various light-controlled CRISPR tools available to researchers - some readily found at Addgene.

END_OF_DOCUMENT_TOKEN_TO_BE_REPLACED

Promoters may be the star of gene regulation, but enhancers and chromatin looping play important supporting roles. Enhancers are cis regulatory DNA sequences that, when bound by transcription factors, can increase a gene’s transcription. Sometimes enhancers are located thousands of base pairs away from the gene they regulate, but are brought in proximity by the looping of chromatin, the complex of DNA and proteins that forms chromosomes.

These long range DNA interactions are often detected with chromosome conformation capture (3C) based methods, such as 5C or Hi-C (Han et al., 2018). Think of 3C methods as taking a snapshot of chromatin looping with the photo “developed” by analyzing DNA sequencing data. While “pictures” generated with current 3C methods provide useful information about chromatin interactions, they are grainy so it’s hard to make out the details. To increase the resolution, the Xu lab created a dCas9-based CAPTURE (CRISPR Affinity Purification in situ of Regulatory Elements) method. The original CAPTURE method was published in 2017 and addressed many of the drawbacks of 3C methods, but could only detect chromatin interactions at one location in the genome at a time (Liu et al., 2017). Recently the Xu lab developed CAPTURE 2.0, an updated version of CAPTURE that detects chromatin interactions at hundreds of loci at once (Liu et al., 2020).

END_OF_DOCUMENT_TOKEN_TO_BE_REPLACED

If you’re using CRISPR to make a genome edit, how do you know if your CRISPR experiment was successful in your organism or cell type? You can use DNA sequencing or other molecular cloning techniques to determine CRISPR/sgRNA efficiency of an experiment and confirm the correct edit was made to the genome without any off target effects. However, these methods can be labor intensive and quite time consuming.

END_OF_DOCUMENT_TOKEN_TO_BE_REPLACED 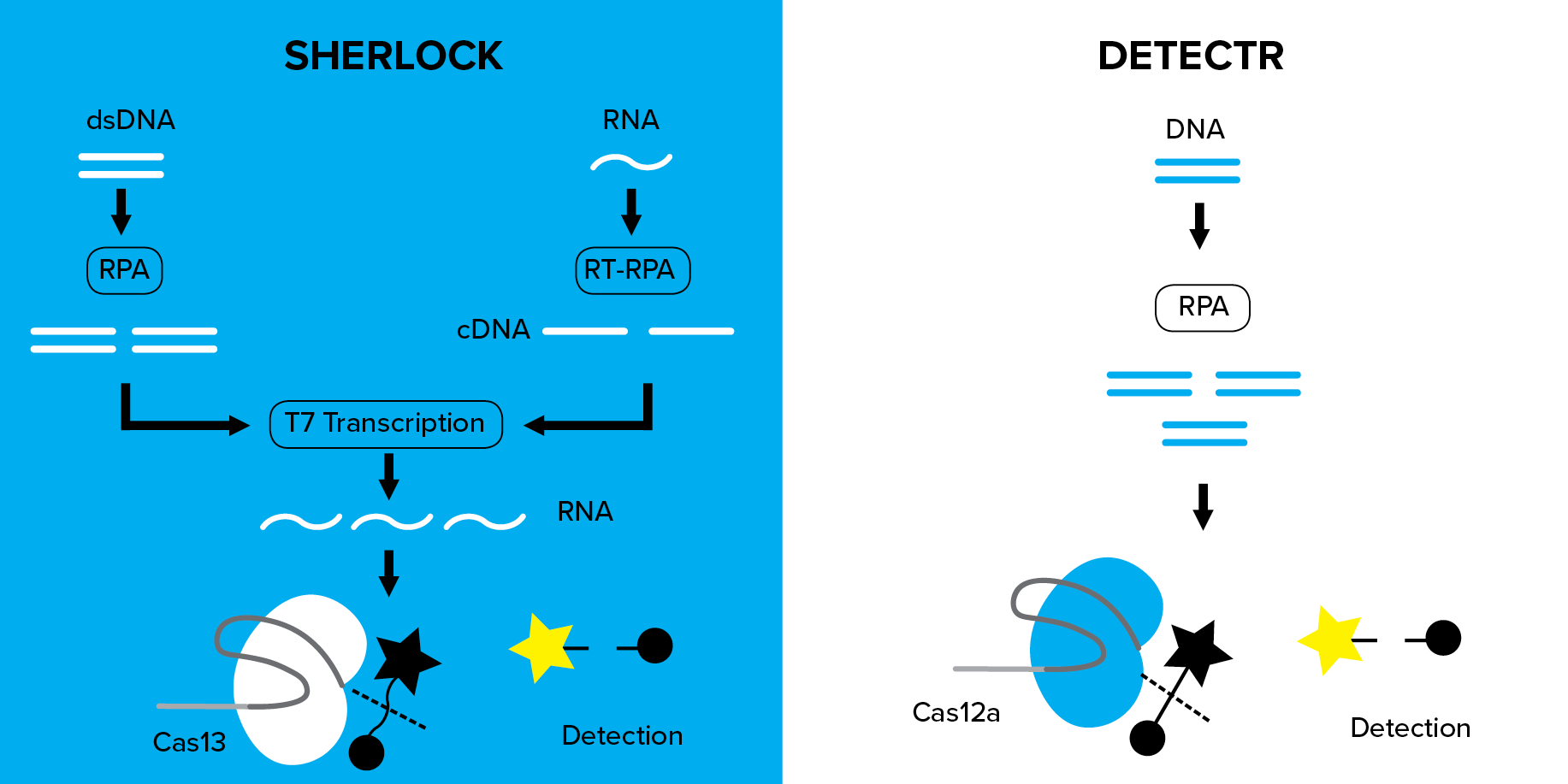 Sensitive and specific nucleic acid detection is crucial for clinical diagnostics, genotyping, and biotechnological advancements. Many methods of nucleic acid detection however, either lack the sensitivity or the specificity to detect nucleic acids at low concentrations and/or are too expensive, time-consuming, and complex to use outside of standard laboratories. In the case of the COVID-19 pandemic, qPCR can be used to diagnose the presence of SARS-CoV-2 RNA, but inadequate access to reagents and equipment has become a bottleneck.

END_OF_DOCUMENT_TOKEN_TO_BE_REPLACED

In this quarterly blog series, we’ll highlight a few of the new CRISPR plasmids available at Addgene. We will still periodically focus on specific CRISPR plasmid tools more in-depth, but we hope that this blog series will help you find more new CRISPR tools for your research!