As previous blogs have noted, plants are an important foundation for life on Earth. Selective breeding methods have shaped the plants that we grow and eat, and genetic engineering will continue to improve plant nutrition, yield, and pest resistance. Much of plant genetic engineering revolves around Agrobacterium tumifaciens. Agrobacterium carries a “tumor-inducing” or Ti plasmid, which allows it to transfer genetic material into the host plant genome. Scientists have worked to optimize this system for gene transfer, studying the stability of modified Ti plasmids during plant infection, as well as plasmid yield during preparation in E. coli. Addgene depositor Indu Maiti has created a new and versatile binary Ti vector for both transient and stable gene expression applications in plants. This smaller, easily customizable vector functions in multiple species, including tobacco and Arabidopsis.

Vectors designed for use in Agrobacterium are termed binary vectors because they must replicate in two species: Agrobacterium and E. coli. Like plasmids used in other systems, binary vectors are cloned and prepped in E. coli. However, they also need to be able to replicate in Agrobacterium to ensure that they are maintained during co-cultivation with the target plant species. Thus, binary vectors contain two origins of replication, one each for E. coli and Agrobacterium, along with a selectable marker. Left and right T-DNA borders specify the region of DNA that will be transferred to the plant, similar to viral vectors’ terminal repeats. It’s a lot of information to fit into a single plasmid, so most first-generation binary vectors are quite large (>10 kb.) Since transformation efficiency is inversely proportional to size, and many plant scientists want to transfer large genes, smaller binary vectors with a larger cloning capacity would be very useful: enter pSIM24! 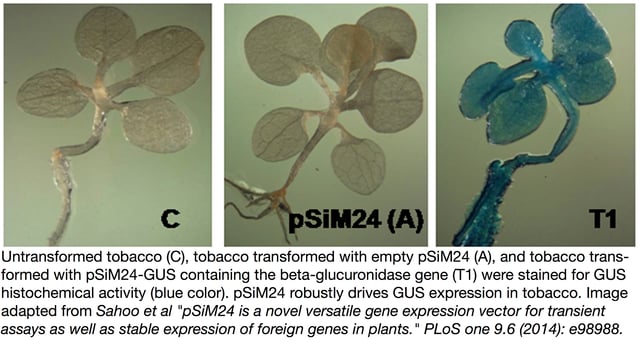 To build a better binary vector, Sahoo et al. started with a vector commonly used by their lab, the 13 kb pKM24KH.To reduce vector size, they shortened the T-DNA borders to 25 bases each. By switching the E. coli origin of replication and codon-optimizing the Agrobacterium ORI, they achieved much higher DNA yield and transformation efficiency in both types of bacteria. They also replaced the promoter regulating the gene of interest with a constitutive, robust M24 promoter. Originally isolated from the Mirabilis mosaic virus, the constitutively active M24 promoter has been modified with duplicated enhancer domains and characterized in studies of tobacco, Arabidopsis, and corn. For both β-glucuronidase (GUS) and GFP reporters, as well as multiple transient and transgenic systems, Sahoo et al. showed that gene expression from the M24 promoter is much higher than that from the commonly used 35S promoter. Transgenes are also efficiently inherited in both transgenic tobacco and Arabidopsis. Finally, Sahoo et al. demonstrate that this new vector, pSiM24, can also be used with biolistic methods, making it useful for engineering plants that are not susceptible to Agrobacterium infection.

At approximately 7 kb, pSiM24 is 2 and 6 kb smaller than commercially available pCAMBIA and pKYLX vectors, respectively, making it ideal for large gene transfer. The M24 promoter provides constitutive, high-level gene expression and is functional in a variety of plant species. The kanamycin antibiotic resistance gene is controlled by a weaker constitutive Nos promoter, and it can be used to select both transformed Agrobacterium and infected plants.

While these properties of pSiM24 are suitable for many applications, the plasmid can also be customized due to its modular structure. Two multiple cloning sites (MCS's) flank the M24 promoter, allowing it to be removed and replaced if needed. In total, three MCS regions permit multiple regulatory elements to be inserted, further customizing gene expression. Sahoo et al. have tested the system with genes up to 4 kb in length and confirmed successful protein expression via Western blotting. Given its versatility and customizability, pSiM24 can be used not only for plant engineering and biotechnology applications, but also for foundational studies of promoter and gene expression.

Find other plant resources at Addgene