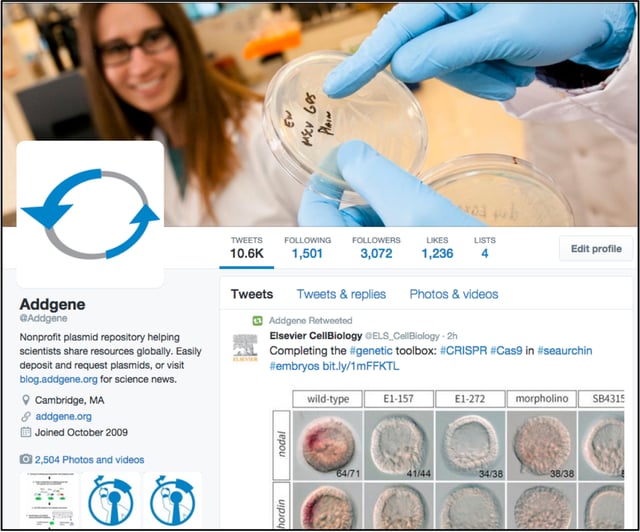 As Joanne Kamens has pointed out, there’s surely no better place for scientists to meet and mingle with other scientists than at a conference. But in this increasingly wired world, more and more of our day-to-day personal interactions are taking place online. And if findings from network science apply to scientists, then building and maintaining an open social network is key when it comes to career success. In this enterprise, more scientists are finding online tools to be instrumental. At Addgene, we're all about helping develop a scientific community, so here are some tips to help you get more involved with your scientific network online.

As Holly Bik and Miriam Goldstein wrote in their PLoS Biology paper, “In the age of the internet, social media tools offer a powerful way for scientists to boost their professional profile and act as a public voice for science.” In “An Introduction to Social Media For Scientists,” Bik and Goldstein offer many tips on how to take advantage of mainstream social media. The article focuses on some of the popular social media tools available and the potential benefits that can be reaped from using these tools.

Most of you probably know at least a little something about Facebook and Twitter (for more on Twitter see our earlier post “Why Scientists Should Give Twitter a Try”).  And those can be useful ways to stay connected with friends, family, and colleagues and, particularly in the case of Twitter, to follow the science news of the day. For professional purposes, LinkedIn is probably the best of the mainstream tools.

But, sometimes those noisy mainstream channels are little more than distractions. No worry, after a slow start, social networking tools aimed specifically at scientists and researchers have begun to take off. According to a Nature survey on online collaboration, more and more scientists are finding these sites useful for maintaining their profile and “professional presence.”

6 tips for using online scientific networks to your advantage

We encourage you to explore. And, if you’ve got something to say about how these tools have been useful to you (or not), please feel free to share in the comments.