Beth Kenkel is currently a research scientist at a cell therapy company. She is particularly interested in science communication and viral vectors. Follow Beth on twitter @ElizabethKenkel. 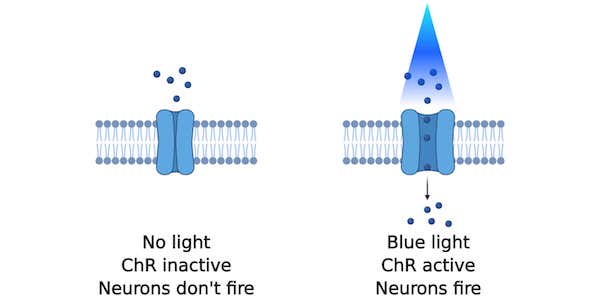 Optogenetics is a neuroscience method that lets you fire neurons with the flick of a light switch. Neurons are not typically persuaded to fire when light is shined on them, but the expression of light-gated ion channels such as channelrhodopsins (ChRs) makes them light-responsive. When light shines on excitatory channelrhodopsin-expressing neurons, the channelrhodopsins respond by opening and allowing an influx of ions into the neuron which generates an action potential (Figure 1). This light-induced excitation can take place in a tissue culture dish but can also happen in real-time inside a mouse’s brain.

END_OF_DOCUMENT_TOKEN_TO_BE_REPLACED 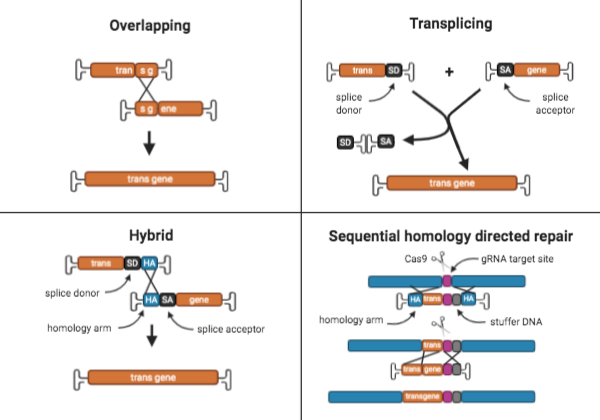 Adeno-associated virus (AAV) has many features which make it a great viral vector, but its packaging capacity is limited to ~4.7kb, or roughly half the packaging limits of lentiviral and adenoviral vectors. While many transgene will fit within this limit, some like prime editing's PE2 enzyme do not. So how do you fit a big gene into a tiny vector like AAV? By breaking the transgene into smaller pieces.

END_OF_DOCUMENT_TOKEN_TO_BE_REPLACED 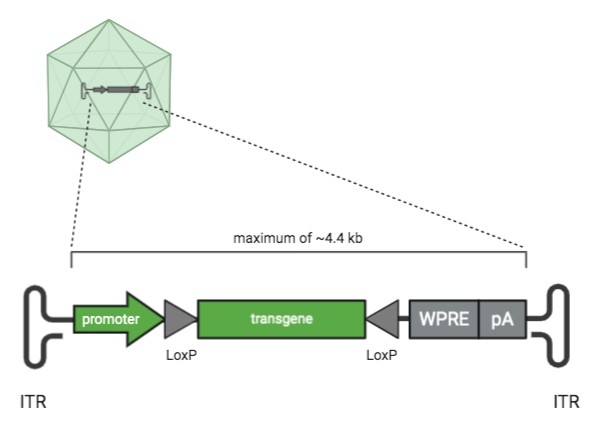 So you have this awesome experiment you want to do, but it requires some AAV. You’ve never worked with AAV before, but you aren’t going to let that stop you. Where do you start? Turns out like all good experiments, making AAV starts with some plasmids. You just need three plasmids to start making AAV:

In today’s blog post, we’ll focus on the AAV transfer plasmid and take a look at each of its parts.

END_OF_DOCUMENT_TOKEN_TO_BE_REPLACED

CRISPR-Cas technology is constantly evolving. Variants of Cas proteins can be used for genome editing, activating gene expression, repressing gene expression, and much more. But there’s one thing that was missing: a way to shut off Cas’s activity. The concern is that the longer Cas remains active in a cell, the greater chances there are for off-target edits to occur. Although methods to switch on Cas activity using light or drugs have been developed, the field lacked an “off-switch” for Cas proteins.

END_OF_DOCUMENT_TOKEN_TO_BE_REPLACED

How to Prepare for an Industry Interview

Congratulations, you’ve just landed an interview for an industry job! You’ve worked hard to earn this opportunity and are excited for this next step. But wait, now you feel a little panicked. You’ve never had an industry interview before. What should you do to get ready for this interview?

Maybe the above scenario sounds familiar to you. It was my experience not long ago. I just recently started working in the pharmaceuticals industry after earning my Master’s in 2016 and then working four more years in academia. During my job hunt, I quickly noticed one of the biggest differences between applying for an academic position versus an industry position is the on-site interviewing process.