Two hybrid systems were developed in Saccharomyces cerevisiae in 1989 and are still used extensively to screen for molecular interactions in the cell, including protein-protein, protein-DNA and protein-RNA interactions. 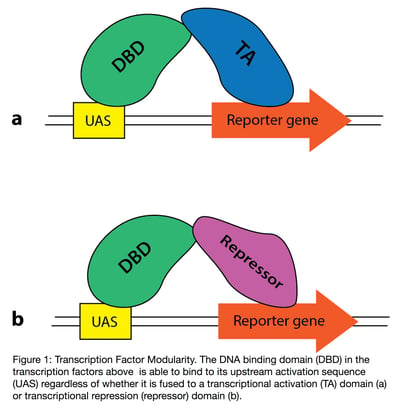 The 1980s saw a flurry of discovery in the field of eukaryotic transcriptional activation and cell biology. During this period, proteins were successfully expressed as fusions that retain their individual activities (1). Researchers also discovered the modular format of some transcriptional activators: that the DNA binding domain (DBD) and transcriptional activation (TA) domains retain their individual activities when separated (2), and that DBD and TAs from different systems could be combined effectively (3). In Figure 1 for instance, the DBD of the fusion protein shown is still able to bind to the upstream activation sequence (UAS) of its target gene, in this case a reporter gene (e.g. luciferase or GFP), regardless of whether it interacts with a transcriptional activator (1a) or a repressor (1b). Scientists took advantage of these discoveries to create a new system for screening protein-protein interactions. In later years, improvements to yeast transformation protocols also helped establish the yeast two-hybrid (Y2H) system as a robust and popular lab tool.

In the classic two hybrid system (also called the interaction trap), genes encoding proteins of interest
(POI’s) are fused to TAs and DBDs (see Figure 2a) (4). These fusions are then co-expressed in a yeast strain that also contains a reporter gene cloned downstream of a promoter containing the target sequence of the DBD. The DBD-POI fusion (commonly referred to as the “bait”, Figure 2b) cannot activate reporter gene expression on its own, but, if the two POI’s interact, this will bring the POI-TA fusion (commonly referred to as the “prey”) in close enough proximity to the promoter of the reporter gene to activate expression (Figure 2c). The reporter gene then allows detection of those cells where binding between the proteins of interest has occurred.

Although the original Y2H systems utilized the yeast Gal4 activator, bacterial LexA DBD and the lacZ reporter gene (3, 4), there are now many variations, including many that use auxotrophic rescue genes as reporters and some that repress instead of activate transcription. The HIS3 reporter system (e.g. the Gateway-compatible bait Y2H plasmid pEZY202  from Yu-Zhu Zhang’s lab) is an example of the former. In this system, histidine-auxotrophic host strains are used to select for binding-dependent expression of the HIS3 gene, which is required for histidine manufacture and therefore growth on his-deficient media. It is even possible to have Y2H systems that avoid transcriptional reporters altogether; In the split-luciferase system, intein-mediated splicing reconstitutes functional luciferase only when fusions of the two halves of the luciferase protein interact and enable intein splicing (5).

While initial studies used single bait and prey protein fusions to demonstrate the utility of the Y2H system, it is more common to use many preys with a single bait in Y2H-based screens. In this way, proteins that interact with a molecule of interest (the ‘bait’) can be ‘fished out’ for further study.

In Y2H screens, a group of prey fusions can either be generated using random genomic fragments from the organism of interest, or a defined cDNA library (e.g. the entire proteome of a particular cell type, or a subset based on a cellular compartment or growth stage). A prey library can either be applied to the bait in a single population (e.g. transforming both fusion plasmids, or mating two single haploid yeast fusion plasmid transformants into a diploid strain for screening), or arrayed on a 96 well plate where each well contains a defined prey fusion.  The former allows for screening greater numbers, but the latter eliminates the step of identifying prey proteins after screening.

It is also possible to screen libraries of bait and prey against each other at the same time in order to try and access the entire interactome of a set of proteins at once.  However, as Y2H screens are prone to both false positive and false negatives, these experiments must be set up, conducted and analysed with care to get reliable information.

Although two-hybrid systems are a powerful tool for screening molecular interactions, accuracy and reproducibility are common problems when performing these experiments. False positives can occur even in small scale experiments, although these can often be accounted for using appropriate replicates and controls (see Tips below), and by validating leads with other methods. More common are false negatives; up to 75% of known interactions can be missed by single-pass two-hybrid screening (6). See the Tips section for more on how to increase your rate of interactions when screening!

Interactions leading to detectable reporter signals depend on a number of factors, including protein expression and correct folding, post-translational modification, protein degradation, access to the nucleus in eukaryotic screens and fusion configuration. The possibility for problems with one or more of these parameters can lead to a high number of false negatives in Y2H screens.