There are many, many different types of experiments carried out by scientists every day. Although the designs and outcomes may vary, one thing should be present in every experiment-based investigation of a hypothesis: proper controls!

For every experiment, an investigator needs a standard against which the results can be compared; results from an experiment lacking the proper controls are invariably inconclusive and unreliable. Proper controls provide the constant variables that enable the correct interpretation of the effect of the independent variable you are testing. Importantly, they demonstrate the functionality of your experimental system and help identify opportunities for troubleshooting or optimization within your experiment. Read on to learn more about the various controls that can be used for plasmid-based experiments.

What are control plasmids?

The Experiment: Knockdown the expression of Gene X using shRNA expressed from a plasmid 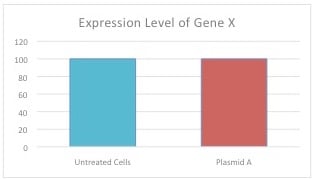 The results shown above are from a single experiment wherein Plasmid A (encoding shRNA against human Gene X in backbone Y) was transfected into human cells.

From this result one could simply conclude that the shRNA didn’t work, as the expression level of Gene X in cells treated with Plasmid A is similar to the expression level of Gene X in the untreated cells—but can we be certain? Do we know whether the plasmid delivered into the cells successfully? Is the shRNA target correct? Is the purified plasmid DNA viable? Or cytotoxic? How and where did things go wrong? The use of proper control plasmids would address and answer these questions.

Part of planning your experiment includes determining what factors need to be controlled for in order to eliminate any alternative interpretation of the results. Typically, plasmid-based experiments employ transfection, negative, positive, and replicate controls.

Another type of transfection control is an internal control vector, which measures transfection efficiency. An internal control may be a plasmid that constitutively expresses a reporter protein (e.g., GFP or luciferase) that is either co-transfected with the test plasmid or transfected into a separate well of your cells. Regardless, the amount of reporter protein activity correlates to both the amount of DNA transfected into the cells and the ability of the cells to express the protein.

In analysis of the result in Figure 1, an internal control, such as the GFP-expressing Plasmid B, could demonstrate whether the cells were transfected successfully and expressing the protein. For example, fluorescence microscopy images resulting from our experiment that includes the aforementioned internal control and is consistent with the result in Figure 1 could look like this:

Figure 2: Expression of Plasmid B (as internal control)

This result indicates that the transfection was not successful due to the absence of GFP fluorescence from the living, viable cells. This result presents an opportunity for troubleshooting and optimization of the transfection reagents and process. It is important to note that optimal experimental conditions, including how much plasmid DNA to use for any individual or co- transfection, should be determined empirically.

Negative control conditions and plasmids should produce a null effect (i.e., no phenomenon is observed). In any plasmid-based experiment, untreated cells should be included as these provide the baseline/standard against which other samples can be compared.

The Empty Vector Control (mentioned above) could also serve as an important negative control. In this context, the empty vector control shows any effect of the vector/backbone itself on gene expression in your target cells.

Figure 3: Expression of Plasmid B (as positive control)

Other positive controls are specific to the experiment and should be designed accordingly. If you are trying activate a gene, you should design a control that shows maximal activation. Likewise if you are trying to repress a gene, your control might be a system where expression of that gene is knocked out completely. These controls may or may not be plasmid-based depending on the experimental needs. Using our experiment as an example, the expected result of the shRNA targeting human Gene X in Plasmid A is the decreased expression of Gene X. Ergo the positive control(s) should decrease the expression of Gene X.

Reliable results are reproducible from properly controlled experiments. The observed phenotype associated with the independent variable should be consistent over time and from different preparations of the purified test plasmid expressing the independent variable. There are two types of replicate controls: technical and biological.

An example of a technical control is the transfection of multiple separate wells (within the same plate) with purified plasmid from the same aliquot/preparation. The replicate control isn’t measuring or assessing reproducibility of the effect of the independent variable because the purified plasmid, cells, and media used in each of the wells are not independent: they were derived from the same source and were incubated on the same plate at the same time. Although the replicate control is important, it speaks to the consistency of the reagents and hands performing the experiment, not the reproducibility or consistency of the observed phenotype associated with the independent variable.

In any given set of experiments, the biological controls are more time consuming and ultimately more important. Ideally, each biological replicate should use fresh media, test independent aliquots of cells and plasmids, be performed on different days, etc, but outside constraints may impose some limitations and you should be cognizant of these when interpreting your results. The key to biological controls is independence: at the very least you should repeat your whole experiment from start to finish multiple times and on different days. Using our example above, we would test different preparations of Plasmid A in different aliquots of cells on several different days. Biological replicates control for the reproducibility and consistency of the observed phenotype associated with the independent variable and helps ensure the phenotype isn’t singular or associated with only one aliquot/preparation of the test plasmid.

Let us now revisit our experiment. In Figure 1, it appeared as though the shRNA did not knock down expression of Gene X but, as shown in Figure 2, this was likely due to the original transfection conditions. Now that we have successfully transfected our cells (Figure 3), we can continue with our experiment, incorporating additional positive and negative controls, performing multiple replicates, and ultimately getting interpretable results: 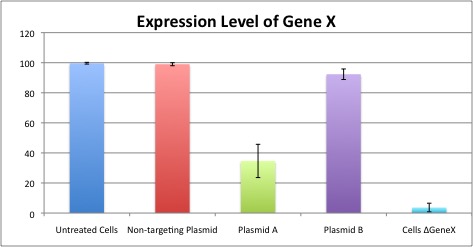 The design and selection of proper experimental controls is not a trivial endeavor, as biological systems have many variables. However daunting designing and executing these steps may be, proper controls are a basic tenet of responsible scientific inquiry and investigation.