The Fluorescent Vegetables in Aptamer Soup

If you’re been following Addgene on #souptwitter or if you just enjoy a warm meal on a winter day, you should be happy to learn that many DNA-based reagents are named for soup ingredients! From pSOUP to mCherry, satisfying reagents permeate the molecular biologist’s lab - and scientists using aptamers might know this best, as most fluorescent aptamers are named for a fruit or vegetable!

What is an RNA aptamer? 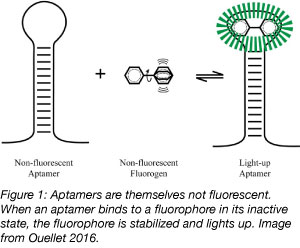 Addgene’s Plasmids 101: Aptamer Fluorophores describes the enrichment process used to evaluate oligonucleotides for binding affinity to a specific target, and the molecular processes that make aptamer biology a powerful tool. In this post, we’ll take a deeper dive into the content of Addgene’s aptamer soup by exploring the development and applications of fluorescent RNA aptamers in Addgene’s collection. 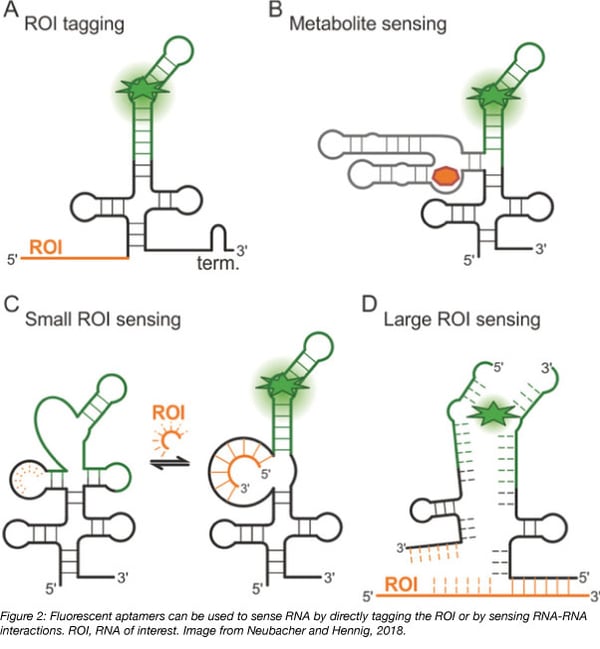 Spinach and Broccoli and their derivatives are aptamers able to bind to a small molecule derivative of GFP called 3,5-difluoro-4-hydroxybenzylidene imidazolinone (DFHBI). DFHBI is membrane permeable and non toxic to cells. Because it rapidly photobleaches, DFHBI can only be used for qualitative, but not quantitative, studies. Additionally, Spinach, the first aptamer identified to bind DFHBI, is highly unstable in vivo due to poor folding and thermal instability at 37°C (Ouellet et al., 2016) and requires a tRNA scaffold to improve its stability in vivo.

However, Spinach has proven useful in the engineering of riboswitches. Riboswitches are naturally occurring regions in the 5’ UTR of mRNA that bind metabolites, leading to conformational changes that control the expression of coding RNA. Spinach-based riboswitches can be used as stable metabolite sensors for imaging in live cells. By placing Spinach downstream of a riboswitch, metabolite binding to the riboswitch instead activates Spinach fluorescence.

In the search for something more stable for quantitative imaging, Ming Hammond’s group created Spinach2 using site-directed mutagenesis of Spinach. In doing so, they identified the nucleotides that contribute to the instability of Spinach, and were able to develop an aptamer that was more thermally stable, exhibited less misfolding, and was consequently brighter than Spinach. 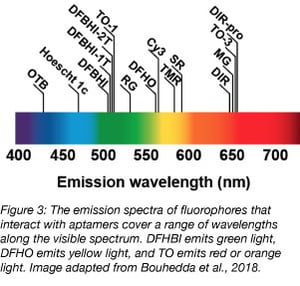 Other variants of Spinach include Baby Spinach, a miniaturized version of Spinach that retains similar levels of fluorescence when bound to DFHBI despite being approximately half the length (Warner et al., 2014); its length reduces artefacts during live cell imaging. Bunch of baby spinach, or BoBS, contains tandem repeats of Baby Spinach. It was developed in a study of artificial guide RNAs that can be used to simultaneously target cellular RNA to specific intracellular locations using Cas9 and track the localization of the complex.

Broccoli, the other green fluorescent aptamer, was identified through directed evolution. First, a pool of RNAs that activate the fluorescence of DFHBI were identified using systematic evolution of ligands by exponential enrichment (SELEX). After 4-6 rounds of SELEX, the RNA pool was cloned into bacterial expression vectors to create a library. Bacteria were transformed, and then sorted by fluorescence-activated cell sorting (FACS) in the presence of DFHBI to identify aptamers capable of inducing the brightest fluorescence (Filonov et al., 2014).

Broccoli is twice as bright as Spinach2 when bound to DFHBI. It’s also smaller than any form of Spinach - only 49 nucleotides in length - and is better able to maintain its fluorescence intracellularly due to a lower dependency on magnesium and higher thermal stability, making it a potentially more useful tool for in vivo studies. Dimerization of Broccoli increases its fluorescence by about 1.8-fold, and may be a better choice for imaging than the monomer. Broccoli has been developed into a split aptamer that can be used to investigate RNA assembly. The split aptamer is composed of a “Top” and “Bottom” portion, each fused to a separate piece of RNA. Fluorescence is observed when these RNAs complex and the entire aptamer can hybridize and fold. (Alam et al., 2017). 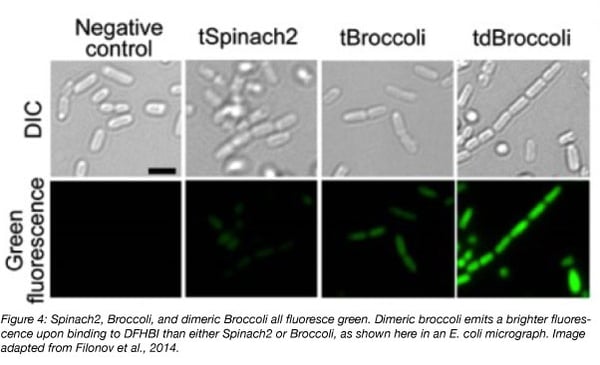 Just as vegetables come in a variety of colors, so do aptamers! Corn was recently described in 2017 (Song et al., 2017). Corn naturally dimerizes, and this dimer activates the fluorescence of 3,5-difluoro-4-hydroxybenzylidene-imidazolinone-2-oxime (DFHO), a fluorophore modified from DsRed. DFHO shares many structural properties with DFHBI, but its structure allows for greater contact with its RNA aptamer. This increased interaction between Corn and its small molecule makes Corn more photostable than Spinach and Broccoli, and useful for quantitative studies. Specifically, Corn was developed to quantify RNA transcription by RNA Polymerase III. By expressing Corn under promoters for transcripts uniquely transcribed by RNA Polymerase III (5S, tRNA and U6) and measuring Corn fluorescence by flow cytometry, the Jaffrey group was able to quantify the effect of mTOR inhibition on the activity of RNA Polymerase III.

For dessert (last but not least), the only fruit-named aptamer, Mango, binds to multiple derivatives of thiazole orange (TO) and fluoresces in the orange or red channel, depending on the structure of the TO derivative (Dolgosheina et al., 2014). While 10 derivatives of TO exist, Mango is most frequently used with TO1-biotin or TO3-biotin (the addition of biotin allows for the purification of specific RNAs from cells using this tag, and both TO1-biotin and TO3-biotin contain an acetate modification that reduces nonspecific binding with RNA by about 7x). Mango fluoresces nearly as brightly as Spinach, but binds with much higher affinity to its cognate small molecule. Mango was initially shown to be effective for imaging single molecules and for live-cell imaging in C. elegans. Other groups have used Mango to study RNA-protein complexes (Panchapakesan et al., 2017) and short non-coding RNAs (Autour et al., 2018). Three variants of Mango, coined Mango II, III, and IV, were then identified through microfluidic-assisted in vitro compartmentalisation for their high binding affinity to TO1-biotin. Two of these variants exhibit increased brightness compared to Mango, and all are photostable and useful for both live and fixed cell imaging.

New ingredients in the aptamer soup

In addition to these established RNA aptamer fluorophores, more are in development, including Carrot and Radish from the lab that developed Corn. Aptamers using unnatural nucleotides are also being developed which could help aptamers better bind their target molecules. With more tools comes more possibility for scientific advancement, and in a field with as much potential for growth as RNA biology, we are looking forward to reports on the next additions to aptamer soup! 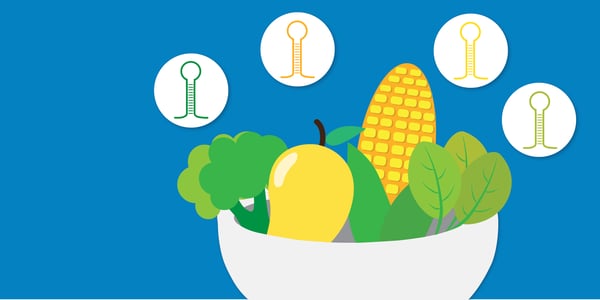