I recently received the following email from a friend: “I'm in the process of onboarding a new employee who's coming directly from grad school. The transition has been a bit rough for her (3 weeks in and there's a big office vs. lab culture shock). I'm looking to see if there are any resources that can help with the transition.”

The lab-to-desk-job culture shock is a real thing. I experienced it, and many of my scientist colleagues have as well. Making the transition from the bench can be jarring for the unprepared, and unfortunately, there aren’t a lot of resources out there for scientists making this transition. In this installment of the Addgene career guide, we’ll think about what causes this culture shock and how to overcome it. 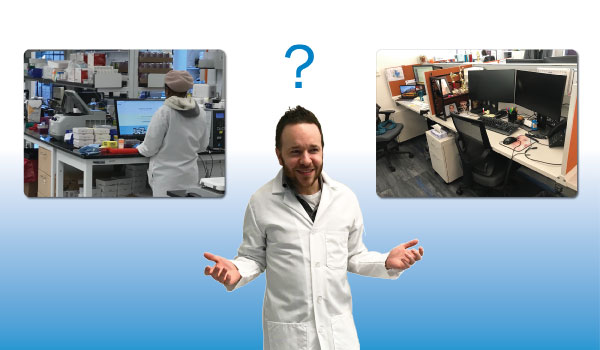 Working in an academic research lab involves a few key features that can be difficult to replicate in other work settings:

What should you expect during the lab → office transition?

I’ve already provided a few counterpoints to some of the causes of culture shock above, but after polling some Addgene colleagues, we’ve come up with a list of things to consider as you make this transition. Of course, a “desk job” could entail any number of career paths--industry, nonprofit organization, law office, journal editor, etc.--so everyone’s experience will be a little different. Some of these changes you may enjoy immediately and some of them may just take some getting used to. Just remember: change is good.

Over the last decade, my peers and I have tried to move away from calling non-academic careers and desk jobs “alternative careers.” Realistically, based on the numbers of PhDs and available positions alone, it’s the academic jobs that have become more of a rare alternative. That’s not always an easy reality to accept for young scientists who thought they would be working in a lab for their entire career. Yet even success in academia means you’ll eventually end up as a PI working what is essentially an office job. One way or another, the move from lab to office will likely happen eventually. If you approach that transition dreading the change, the adjustment period will be that much longer. If you approach the transition embracing the opportunity for growth, you can tap into curiosity that led you into science in the first place.

Finally, if you still find the idea of not holding a pipette again upsetting, there are ways to get back to the bench during your off hours. DIY bio labs are cropping up in cities around the world, such as BosLab here in Boston. Organizations like this one are always looking for scientists who can volunteer their time to share their knowledge with the community (and sometimes conduct their own independent research!). There are also organizations like Science from Scientists, which try to bring real scientists into schools to provide students with hands-on lab opportunities. You can get your hands in nitrile gloves again! The opportunities are there once you start looking for them.

Big thank you to Jessica Welch, Mike Lemieux (for his advice and for modeling in the picture above), and Will Arnold for their ideas and tips!