CRISPR 101: Which Cas9 Do I Choose for My CRISPR Experiment? 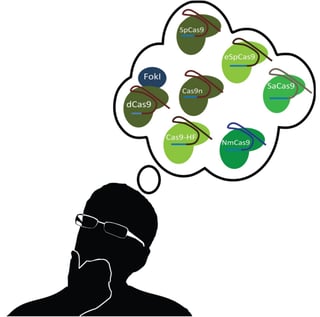 The advent of CRISPR/Cas9 made it easier than ever to efficiently make precise, targeted genome modifications. Cas9 has been modified to enable researchers to knock out, activate, repress or even image your favorite gene.  But, with such a wide variety of Cas9-based reagents available, how do you choose which Cas9 is right for your particular experiment?  This blog post will help familiarize you with the wide array of Cas9s available through Addgene’s repository and make it easy to select the Cas9 reagent that is right for you.

The first thing to do in any CRISPR experiment is identify what, exactly, you are trying to do.  Are you trying to permanently knock-out a gene in a cell type or organism? Are you trying to reduce expression of a particular gene without permanently modifying the genome?  Does it make more sense to try and activate at a particular locus?  What about modifying the epigenome at a particular location?  As you might expect, the answer to this question will substantially affect your decisions about which Cas9 you need for your experiment.  Below is a brief summary of a few of the common genetic manipulations one can carry out using Cas9 and the specific Cas9s that can be used for each.

Choosing a Cas9 for your knockout experiment 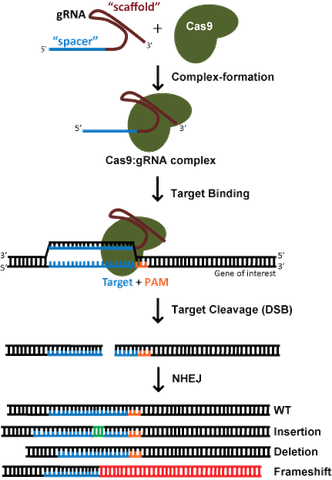 Knock-out cells or animals are created by co-expressing a gRNA specific to the gene to be targeted and the endonuclease Cas9. The genomic target can be any ∼20 nucleotide DNA sequence, provided it meets two conditions: 1) The sequence is unique compared to the rest of the genome. 2) The target is present immediately upstream of a Protospacer Adjacent Motif (PAM).  SpCas9 is a common choice when there is a suitable target site and little concern for off-target effects (e.g. optimal gRNA design with minimal homologous sites throughout the genome).  Addgene carries a wide variety of SpCas9 containing plasmids that have been optimized for carrying out genome engineering experiments in bacteria, yeast, worms, drosophila and mammals.

The specificity of Cas9-mediated cleavage can be enhanced by properly designing your gRNA sequence.  That is, choosing a target sequence that has minimal homology elsewhere in the genome.  A variety of approaches have been used to further enhance Cas9 specificity.  For example, Cas9-nickase (Cas9n) takes advantage of the fact that Cas9 makes double-strand breaks (DSBs) through the combined activity of two nuclease domains, RuvC and HNH. Converting one of the two critical enzymatic residues to an alanine (D10A or H840A) generates a “nicking” Cas9 that cannot generate a double-strand break.  Thus, two properly targeted Cas9n molecules are required to efficiently create DSBs at the target locus, which greatly enhances specificity compared to wild-type SpCas9.

While Cas9n is certainly more specific than wild-type SpCas9, DSBs are still detectable at target sites when only one gRNA is expressed with Cas9n. This means it’s possible for Cas9n to bind and cause an indel at one of the off target sites for either of its gRNAs.  One can overcome this limitation through the use of nuclease dead Cas9 (dCas9) fused to the non-specific endonuclease FokI.  FokI only cleaves target DNA when dimerized. Therefore, dCas9-FokI essentially requires proper targeting of two dCas9-FokI molecules at the target site before any cleavage occurs; dCas9-FokI is much less likely to cut at an off target specified by a single gRNA than Cas9n.

An obvious limitation of the Cas9n or dCas9-FokI approach is that they both necessitate two suitable target sequences in close proximity in order to efficiently generate a DSB.  Several labs, including Feng Zhang’s lab at the Broad Institute and Keith Joung’s group at MGH, have used structural biology to identify key residues that mediate Cas9’s ability to cleave off-target sites.  So-called “enhanced Cas9” (Zhang) or “high-fidelity Cas9” (Joung) have comparable cleavage activity to wild-type SpCas9 at target loci but have greatly reduced off-target activity.  These Cas9 variants enhance specificity without requiring two or more adjacent target sites within the target locus. More information on the enhanced specificity Cas9 variants can be found in our blog post entitled “Enhancing CRISPR Targeting Specificity with eSpCas9 and SpCas9-HF1”.

What do I do when there is no 5’NGG’3 PAM sequence present?

Through a series of positive selection screens in bacteria, Keith Joung’s group identified mutants of S. Pyogenes Cas9 (VQR, EQR and VRER Cas9 variants) that recognize novel non-NGG PAM sequences. Importantly, the VQR, EQR and VRER Cas9 variants are capable of modifying genomic loci that cannot be modified using wild-type SpCas9, and their specificity for the PAM variants is similar to wild-type SpCas9 for several genomic targets in human cells. Including the VQR, EQR and VRER SpCas9 variants effectively doubles the targeting range of CRISPR/Cas9 within the human genome.  More information on the various synthetic Cas9s available through Addgene can be found on our blog post entitled “The PAM Requirement and Expanding CRISPR Beyond SpCas9”.

Additional Cas9 homologs have been isolated from a wide variety of bacterial species and many bind PAM sequences other than the typical NGG PAM sequence.  So called “non-Sp” Cas9s may be more suitable for your experiment for reasons other than the PAM sequence. For example, the coding sequence for Cas9 from Staphylococcus aureus (SaCas9) is about 1 kilobase smaller than SpCas9, which allows for packaging into adeno-associated virus (AAV), the current gold standard for gene therapy.  It is important to remember that non-SpCas9s are only compatible with the tracrRNA and crRNA (or synthetic gRNA) derived from the same species. More information on the various non-SpCas9s that are available through Addgene can be found on our blog post entitled “The PAM Requirement and Expanding CRISPR Beyond SpCas9”. 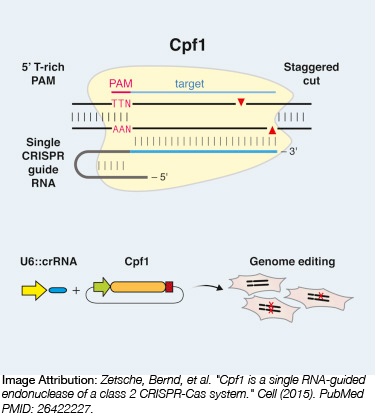 A new CRISPR endonuclease was recently identified by the Zhang lab at the Broad institute.  This non-Cas9 CRISPR endonuclease, termed Cpf1, is a class 2 CRISPR endonuclease that is capable of cleaving target DNA in an RNA dependent manner.  What makes Cpf1 so interesting is not the similarities to Cas9 (it has many) but the differences.  The PAM sequence for Cpf1 is 5' TTN 3' and is located 5’ to the target site (in contrast to the Cas9 PAM which is 3’ to the target site).  The endonuclease contains two enzymatic residues similar to Cas9 (D917 and E1006) but both residues are located in the RuvC domain (Cpf1 lacks an HNH domain) and mutation of either residue completely abolishes DNA cleavage.  In contrast to SpCas9, which can be converted into a nickase by mutating a single enzymatic residue.  Intriguingly, Cpf1 cleavage results in a 5 nucleotide 5' overhang 18 base pairs from the PAM sequence.  This is different from Cas9 cutting, which results in blunt DNA ends 3 base pairs distal to the PAM sequence.  Whether the staggered cutting pattern of Cpf1 will allow researchers to avoid using the inefficient HDR-dependent pathway for gene editing remains to be demonstrated, regardless, it is likely that the most exciting applications of Cpf1 are yet to come.  You can find the Cpf1 plasmids and links to the publication on the Addgene website and read a little more about it on our blog.

One unique aspect of Cas9 is its ability to bind target DNA independently of its ability to cleave target DNA.  In other words, Cas9 containing mutations that disrupt DNA cleavage (D10A and H840A for SpCas9), is still capable of binding target DNA.  Further, so-called nuclease dead Cas9 or “dCas9” can be used as a platform to deliver various cargo to specific DNA loci by fusing them directly to dCas9.  This property of dCas9 has been exploited to localize a diverse array of proteins to target genes, including transcriptional activators and transcriptional repressors.

Early experiments using dCas9 in bacteria demonstrated that targeting dCas9 to transcriptional start sites was sufficient to “repress” or “knock-down” transcription by blocking transcription initiation. In mammalian cells, robust repression requires targeting dCas9 tagged with transcriptional repressors to the promoter region of the gene of interest. You may want to consider using dCas9-based repressors including dCas9-KRAB when knocking out your target gene is toxic to cells. Plasmids for repressing target genes in a variety of species and cell types can be found on Addgene’s website.

The array of dCas9-based activators is quite diverse.  The simplest activator consists of dCas9 fused to a single transcriptional activation domain (typically VP64). A second generation of activators has recently been developed and these alter gene expression using a few different approaches. For example, the “SunTag” system facilitates recruitment of multiple activation domains to the same genetic locus through co-expression of epitope tagged dCas9 and antibody-activator fusion proteins. The Synergistic Activation Mediator complex consists of a dCas9-VP64 fusion and a modified gRNA that is capable of interacting with an additional RNA-binding transcriptional activator. Additional plasmids for activating target genes in a variety of species and cell types can be found on Addgene’s website.

You have selected the Cas9 that is right for your experiment.  What do you do next?  Here are some considerations that will help you move your CRISPR experiment forward.

Designing or selecting a gRNA - Addgene may already carry a “validated gRNA” for your favorite gene from your favorite species.  Validated gRNAs have been used successfully in experiments and published in peer reviewed journals and will save your lab time and money when starting a CRISPR experiment.  If you need to generate a new gRNA for your experiment, you can select from a variety of “empty gRNA vectors” and design your gRNA targeting sequence using one of the many freely available gRNA design programs.

What type of expression system or delivery method should I use?  Selecting the appropriate Cas9 reagent for your experiment is only half the battle - now you have to select the appropriate expression system and deliver Cas9 to your target cells!  Addgene carries a variety of Cas9 containing plasmids that have been optimized for expression in different species and cell types including (but not limited to) bacteria, yeast, plants, drosophila, worms and mammals (Browse plasmids by model organism, here).  For difficult to transfect cell types, you may want to consider using lentivirus to deliver Cas9 to your target cells.  More information on the various delivery systems for mammalian cells can be found on our blog post entitled, “CRISPR 101: Mammalian Expression Systems and Delivery Methods”.

Validating your genome edit - Once you have delivered Cas9 and a gRNA to your target cells, it is time to confirm that your target sequence has been modified!  The exact protocol may vary depending on your specific experiment, but a broad overview of the various ways in which you can verify your genome edit can be found in our blog post entitled “CRISPR 101: Validating Your Genome Edit”.

Find Validated gRNAs for Your Next CRISPR Experiment