You’ve created your gRNA expression construct and used Cas9 to introduce it into your target cells. Hooray! You’re ready to begin reading out data, right? Almost. In this blog post we’ll explain how to verify that your cells were appropriately edited. We’ll also cover the basic techniques for detecting insertion, deletion, and mutation events.

The method for validating your genome edit will vary by species and the type of edit. In this post, we will focus on diploid mammalian cells, but many of the principles will hold across different model organisms.

Introducing Cas9 and a gRNA into your cells (possibly along with a donor template) will result in a mixed population of cells. Following the introduction of a Cas9-mediated double strand break (DSB) in mammalian cells, cellular machinery repair the DSB by non-homologous end joining (NHEJ) or homology directed repair (HDR). Repair via the NHEJ pathway predominates in mammalian cells resulting in the creation of indel errors, short heterogeneous insertions and deletions of nucleic acid sequences, at the site of the DSB. In addition to the heterogeneity of indels introduced at Cas9-induced DSBs, allelic editing frequencies will vary as well. The HDR pathway requires the presence of a repair template, which is used to fix the DSB in a more specific manner. HDR faithfully copies the sequence of the repair template to the cut target sequence. Some cells will not be edited, some will have one allele edited, and some will have both alleles edited. 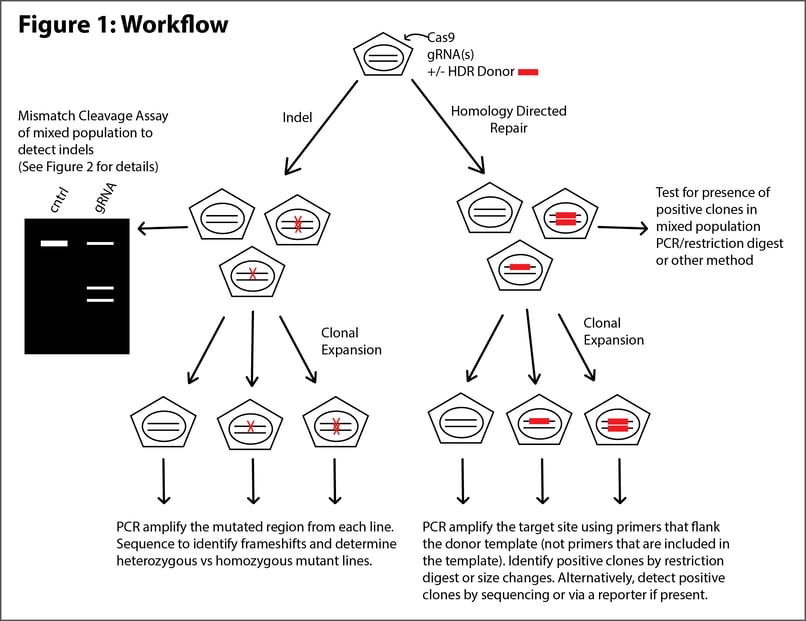 Once you know that a portion of your cells have been edited, you can go on to create clonal cell lines. Serial dilutions can be used to isolate single cells followed by an expansion period to generate these lines. If you have a fluorescent protein marker on your plasmid, you can use FACS to enrich the cells that received Cas9 and your gRNA. After expansion, assay each cell line and sequence the region of interest in order to validate the genome edit as described in Figure 1. But don’t stop there, because you can potentially validate your edit at four different levels (DNA, RNA, protein, and phenotype). Depending on the nature of your edit, something like qRT-PCR could be used to demonstrate a difference in mRNA transcript levels. A western blot can assess protein expression, and phenotypic analyses will be crucial to demonstrate the functional consequences of your edit. We’ll focus mostly on validation at the DNA level in this post, so read on to learn more! 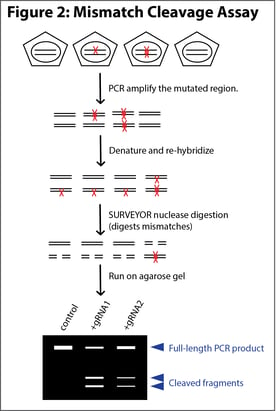 A mismatch cleavage assay is a quick and easy way to detect indels. SurveyorTM nuclease is commonly used for this purpose, as it cleaves both DNA strands 3’ to any mismatches. It can detect indels of up to 12 nucleotides and is sensitive to mutations present at frequencies as low as 1 in 32 copies.

Mismatch cleavage assays typically consist of four steps: 1) PCR amplify the region of interest, 2) denature the strands and rehybridize to allow for the mutant and wild-type strands to anneal, 3) treat annealed DNA with SurveyorTM nuclease to cleave heteroduplexes, and 4) analyze DNA on an agarose gel or other instrument that separates DNA based on size. Figure 2 illustrates how the assay works. In this example, both +gRNA lanes contain cleaved fragments of the expected sizes, indicating that the gRNAs successfully produced indels in the target region. This assay is often used semi-quantitatively, and in this case, gRNA1 appears to be more efficient at producing indels than gRNA2. This is because of the greater intensity of the lower molecular weight bands on the gel for gRNA1, which suggests that it generated more indels that could be recognized and cleaved by SurveyorTM nuclease.

If you’d prefer an alternative to the mismatch cleavage assay as a means of semi-quantitatively detecting indels, you could also try RFLP analysis. RFLP stands for Restriction Fragment Length Polymorphism, and can be used when INDELS either create or abolish restriction endonuclease recognition sites. Following PCR amplification of the target region and subsequent digestion with appropriate enzymes, the DNA can be run on an agarose gel or other instrument that separates DNA based on size, and the restriction pattern analyzed to determine the degree of indel formation in your polyclonal cell population. RFLP analysis has an advantage over the mismatch cleavage assay because it can detect homozygous mutations. The major disadvantage is that you must have an altered restriction recognition site for this approach to work.

If you want to mutate your region of interest using HDR, it is advisable to first determine whether your gRNA is efficiently cutting your target sequence by creating indels and conducting a mismatch cleavage assay. Once you’ve selected your optimal gRNA, introduce it along with Cas9 and your repair template to drive HDR.

When designing your HDR donor template, plan ahead for detection of integration events. For instance, you could purposefully introduce or remove restriction sites which would alter the digestion pattern of PCR products. Alternatively, you could include a reporter element for detection of HDR at the DNA, RNA, or protein level. A large insertion or deletion after integration could also be detected by a size change in the PCR product. Single nucleotide changes can be quickly assayed using restriction digests if the polymorphism creates/removes a restriction digest site. Otherwise, single nucleotide changes can be detected by TA cloning and Sanger sequencing, next generation sequencing, or droplet digital PCR genotyping.

Remember that performing serial dilutions and generating clonal cell lines will help with validating your genomic edit. This is because the CRISPR-Cas9 system makes different edits across different cells in the population, and this can convolute the interpretation of your results. For example, if you sequence from a mixed population, you’ll see many overlapping peaks in a Sanger sequencing chromatogram. Sanger amplicon sequencing can give you a general idea that some editing occurred, but you won’t know which cells were successfully modified.

HDR events are generally less frequent than indels, so you will likely need to screen a larger number of colonies to create a clonal line. The number of clones that need to be screened will depend on both your transfection/transduction efficiency and HDR frequency. For example, if you have 40% transfection efficiency and 5% HDR efficiency, approximately 0.4x0.05=0.02 or 2% of your cells will have the recombined region. Thus, you should plan to screen at least 50 colonies. If you are able to select cells that have been successfully transfected/transduced using a marker, then you may be able to test fewer colonies.

Check Out Our Post on Sequencing Options for CRISPR Genotyping

Most deletions are created by using two gRNAs that direct Cas9 to cleave out the intervening region of DNA. The deletion can thus be detected by conducting a PCR using primers flanking the deleted region. The workflow is similar to that described in Figure 1. Figure 3 provides an example of PCR results obtained by screening a panel of clonal lines for deletions. In this example, clones 1, 5, and 7 are heterozygous for the deletion and clone 4 is homozygous for the deletion.

Next Generation Sequencing to validate edits and detect off-target effects

If your lab has the resources, you can quantitatively assess genome edits in your target sequence and other regions of the genome using next generation sequencing (NGS). NGS is a good option if you have a large number of samples and/or want to simultaneously look at off-target changes. When using this method, it is important to keep a set of control cells as you will need to compare the sequencing reads from your edited sample to this untreated population. Software such as CRISPResso can help with the data analysis.

But what if your lab doesn’t have the resources for NGS? You still have options for detecting off-target effects. You could use Sanger sequencing, provided that you have some idea of where in the genome you might expect off target editing to occur. Using in silico prediction analyses like CRISPRitz or CRISPOR can help narrow down the list of sites where off target editing may occur, allowing you to Sanger sequence a manageable number of the higher probability locations.

If you’re worried about off-target effects, you can also think about using a version of Cas9 that has been specifically engineered for reduced off target editing, such as SpCas9-HF1, eSpCas9(1.1), or HypaCas9.

The techniques described in this post are not CRISPR-specific and can also be used for assessing genome edits created by TALEN or Zinc Finger Nucleases. Regardless of what method you use, validating your edit is time well spent as you prepare for your future experiments.