Tips for Titering Your Lentiviral Preps 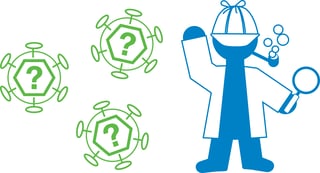 The day has arrived; you’ve painstakingly cared for your packaging cell line, prepped your DNA, transfected and harvested your lentivirus. Now it’s time to move ahead with your infection and make your stable cell line. While we’ve all experienced the pressure to move a project forward, transductions should not be rushed into. Before you start any transduction, you should always titer your virus - that is, determine the amount of virus you actually have in your prep. Taking time to properly titer your virus will not only ensure that your infection is designed in the best possible way, but it may also save you time in the long run. Read on for an overview of the titering options as well as the benefits and drawbacks of different methods (for comprehensive protocols for all of the methods discussed here refer to Kutner et. al.).

Viral titers usually come in two flavors, physical or functional. Physical titers measure the amount of viral particles in a sample and are usually based on the presence of a viral protein, such as p24, or viral nucleic acid. Functional titers, or infectious titers, measure how many of the viral particles produced can actually infect cells. These assays typically involve infecting a target cell line with your virus and assaying for expression of a gene carried on the transfer plasmid or quantifying the number of viral copies that have integrated into the target cell’s genome. 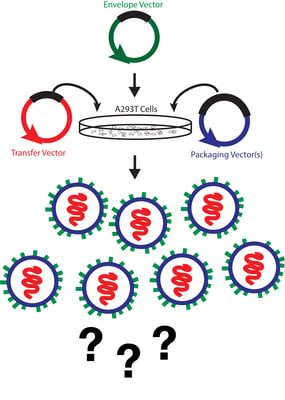 The two most common assays for physical titer are direct p24 measurements via ELISA and qPCR for viral RNA. Measuring p24 levels in a viral prep is straightforward and rapid as there are several commercially available p24 ELISA kits that can quantify p24 levels in a matter of hours. A major drawback of this method, however, is that a p24 ELISA measures all p24 in the sample regardless of whether or not it is incorporated into a viral particle. Consequently, titers based off of p24 quantification tend to be overestimates since they can include free p24 and defective viral particles.

Direct measurement of lentiviral RNA is one alternative to direct p24 measurement. Like a p24 ELISA, this method is relatively quick, providing results in less than a day, but tends to be less expensive than an ELISA kit. In this approach, viral RNA is first converted to cDNA and then quantified using qPCR primers targeting specific viral components such as LTRs, gag, WPRE, antibiotic resistance-genes, or the transgene itself. Many researchers prefer to design primers that target the common features of viral vector backbones; once validated these universal primers can be used to titer any lentiviral prep that shares that specific feature. Primers targeting the transgene are also beneficial as they ensure that the correct transfer plasmid was used in the transfection; if preparing several different lentiviruses in parallel, this approach should be considered.

Similar to the p24 assay, titering via measurement of viral RNA can overestimate the amount of infectious virus in a prep as the measurement will include defective particles. Studies have found that values can be 10-1000 fold higher than for functional assays depending on the vector backbone. When using qPCR based methods for viral titration consider using a reverse transcriptase mutant in a separate control reaction. This will allow you to quantify the amount of PCR product that comes from amplification of the original plasmid which can over-inflate results. A packing vector deficient in reverse transcriptase will produce low levels of virus and can be used to track carryover. 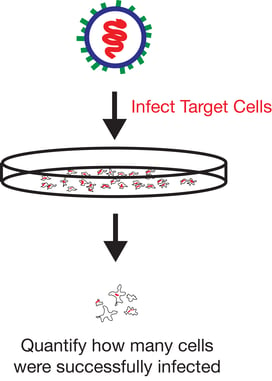 Functional titer is considered a more accurate method to quantify virus as it only measures infectious viral particles. One of the simplest methods of measuring functional titer uses FACS to count the number of target cells that are positive for vector encoded transgene expression following transduction with serial dilutions of a viral prep. This method is particularly useful when vectors carrying fluorescent markers are used as it eliminates the need for antibody staining.

Another popular approach utilizes the antibiotic resistance genes carried on transfer plasmids. Target cells are transduced with serial dilutions of a viral prep, treated with the antibiotic, and colony-forming units quantified. While these methods tend to be more accurate than measuring physical titer, there is a risk that they may underestimate viral titer as these assays cannot distinguish between a cell that has had one viral particle integrated into its genome and a cell that has had multiple integration events. In addition, promoter choice can also impact transgene expression.

The most accurate method of lentiviral titration uses qPCR to measure the number of proviral copies that have integrated into a target cell’s genome. This approach can discriminate multiple integration events, reducing the possibility of underestimating the viral titer. The main drawback of this approach is that it can be quite labor intensive. Target cells are transduced with serial dilutions of a viral prep, genomic DNA isolated, and primers targetting viral components or the transgene itself are used to quantify the number of integration events. Another drawback to this method can be the absence of suitable controls. The best control for this type of assay is a clonal cell line known to contain 1 integrated copy of the qPCR target gene. Developing the proper control line typically requires transducing with a limiting multiplicity of infection (MOI) to ensure only one copy integrates, selecting by antibiotic-resistance or single cell sorting based on expression of a surface marker, subcloning, expansion, and confirmation. This procedure can take several months but should be considered in labs that will routinely be producing virus or require precise titers.

Volume and transduction time will influence lentiviral titers as will the target cell type used. Therefore, it is critical that standard conditions be used when comparing different batches of virus. In addition, some viral preps are very sensitive to freeze thaw cycles; the titer measured with a freshly collected lentiviral prep may be significantly higher than the same prep that has been stored in the freezer. If you plan to freeze a batch of virus for long term use, you may want to consider using an aliquot that has been subjected to a freeze/thaw cycle for titering as this will better represent future experiments.

The aforementioned titering options all have their benefits and drawbacks. Labs that do not routinely produce virus may want to choose more straightforward approaches such as the FACS-based or colony-forming unit assays, whereas labs that routinely produce virus may want to consider the more accurate proviral integration assay. In either case, properly titering your viral prep is the critical first step of a successful transduction experiment.