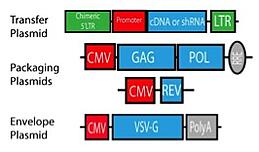 The use of viral vectors in research is beneficial for a number of reasons, including but not limited to: helping to get difficult-to-deliver DNA into mammalian cells, increasing the efficiency of gene transduction, allowing for control over which cells are infected through viral pseudotyping, and ease of vector cloning and modification. At the most basic level, viral vectors consist of a viral genome that has been adapted into a plasmid-based technology and modified for safety through the removal of many essential genes and the separation of the viral components. Read on for a brief description of the viruses used to make these vectors as well as a table defining the major elements found within the plasmids comprising the viral vector systems.

Of the many viruses out there, only a subset are commonly used in the lab and we will discuss the three most prevalent: gamma-retrovirus, lentivirus, and adeno-associated virus.

A retrovirus is an RNA virus that uses reverse transcriptase to make a DNA provirus which can be incorporated into the host's genome. There are two common genera of retrovirus used by scientists: Gamma-retrovirus (many times shortened to just "retrovirus") and lentivirus. From these two genera, the most studied types are Murine Leukemia virus (MLV) and human immunodeficiency virus-1 (HIV-1), respectively. Since these viruses are closely related, their life cycle and the required components are basically the same, although differences do exist at the sequence level. This means that plasmids containing virus-specific elements such as the LTRs or structural proteins are not interchangeable; however, other, more general, viral components such as a heterologous envelope or a post-transcriptional regulatory element can be used across either system. The most notable difference between gamma-retrovirus and lentivirus is the fact that lentivirus can infect both dividing and non-dividing cells, whereas gamma-retrovirus is restricted to dividing cells only.

Adeno-associated virus or AAV is a small parvovirus that infects humans and some other primate species, but is not currently known to cause disease. If AAV is exclusively used to infect human cells, it stably integrates at a specific chromosomal site as part of its lysogenic life cycle; however, the addition of a helper virus such as adenovirus or a helper plasmid containing the specific viral proteins E1A, E1B, E2A, E4, and VA will cause AAV to enter a lytic cycle and replicate. There are at least eleven different serotypes of AAV, with likely more to be discovered. The most studied and experimentally used serotype is AAV2; however, many factors including species and cell type may make other serotypes more desirable.

When developing viral vectors, scientists strive for a number of features: low risk, high expression, large payload capacity, ability to infect target cells, no immune response from the host, and easy to develop/use in the lab. In virtually all viral expression systems employed by scientists, non-essential components are stripped away and the remaining native genes are spread over multiple plasmids to ensure safety. The choice for how the elements are divided up is dependent on whether the component needs to be provided in cis (on the same plasmid) or in trans (on a separate plasmid) as your insert. The tables below list some components most commonly found in viral vector systems.

*Exception is AAV5, which requires AAV5 Rep and AAV5 ITRs for packaging.