Addgene has an extensive collection of lentiviral plasmids created for a variety of applications including cDNA expression, shRNA-mediated knockdown, Tet and Cre-regulated expression, CRISPR genome editing, and more. Not surprisingly, we receive many questions from scientists all over the world looking for some additional information or clarification on these vectors. Read on to find the answers to our most frequently asked lentiviral questions.

This useful resource from Addgene Depositor (and lentiviral expert) Didier Trono's lab webpage explains how lentiviral particles are produced by co-transfecting three essential ingredients: the lentiviral packaging vector, a transfer vector including the gene of interest, and the plasmid coding for an envelope. Three generations of lentiviral packaging systems have been developed over the years based on HIV-1; however, the 1st-generation vectors are never used as they pose too much of a biosafety risk to scientists. Second-generation vectors are likely sufficient for most experiments; however, the 3rd-generation packaging systems offer the maximal biosafety available for the technology. The minor limitation in using the 3rd-generation system is that it involves transfecting four different plasmids into the producer cells (two packaging plasmids, an envelope plasmid, and the lentiviral transfer vector), rather than the three used for 2nd-generation systems.

Now let's get into some of the nitty gritty and answer the questions those of us at Addgene get asked most often:

Q1: Are retroviruses and lentiviruses the same thing? Can I package lentivirus with retroviral packaging plasmids (and vice versa)?

A1: Lentiviruses are part of the retroviral family. What scientists often refer to as “retroviruses” are technically gamma-retroviruses - another, separate member of the retroviral family. While both lentiviruses and gamma-retroviruses use the same genes for packaging (that's gag, pol, and env), the isoforms of these proteins, as well as the viral long terminal repeats (LTRs) are different. As a result, lentiviral and retroviral packaging vectors are not interchangeable. While these differences may seem subtle they result in a key physiological difference between lenti- and retroviruses. Lentiviruses are able to enter an intact nuclear membrane allowing them to infect both dividing and non-diving cells while retroviruses can only infect dividing cells. When choosing the appropriate gene delivery system, the specific target cell or tissue needs to be considered.

Q2: Can I use lentiviral transfer vectors for transient transfections?

A2: Technically, yes. Will it actually work? That depends. The majority of transfer plasmids use the weak viral LTR promoter to drive expression of the gene of interest. Consequently, the levels of protein expression tends to be much lower than those seen when using a plasmid backbone that was designed specifically for transient expression (find some useful backbones here) or from viral transduction. While not ideal, transient expression of viral constructs is a useful tool as it provides a means to quickly check that a construct is functional before investing time and resources into making a stable cell line. When expressing a viral construct transiently care needs to be taken to ensure that the proper cell line is used; several common laboratory cell lines including 293 were immortalized with adenoviral protein E1A, which has been shown to repress expression of HIV-1 LTRs (more information is available here).

Q3: How can you tell 2nd- and 3rd-generation transfer vectors apart? 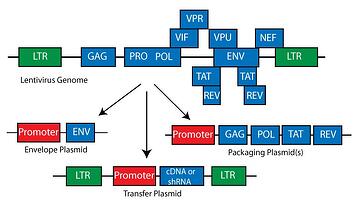 Q4: How do the packaging systems differ between 2nd- and 3rd-generation vectors? What does this mean for transfer vectors?

A4: The lentiviral packaging systems differ in two ways. Firstly, 2nd generation systems consist of an envelope plasmid and a packaging plasmid encoding HIV proteins gag, pol, rev, and tat. 3rd generation systems require an envelope plasmid, and two packaging plasmids, one encoding gag and pol and a second encoding rev.  Secondly, 3rd generation packaging systems have modified the 5’ LTR of the transfer plasmid to eliminate the need for the HIV Tat protein and consequently are considered safer.

Q5: What envelope glycoprotein will be expressed on virus particles?

A5: This depends on the envelope plasmid you use as the choice of envelope dictates the tropism of the virus.  VSV-G is very common due to its broad host range, and increased particle stability; however, the protein is cytotoxic precluding the long-term expression of lentiviral vectors in producer cell lines. Identifying less toxic envelope proteins or envelope proteins that target specific tissues are areas of active study (for a review click here). Alternative envelopes are powerful tools as they allow researchers to target transduction to a particular cell type or tissues; this is useful in gene therapy applications where a distinct subset of the cellular population needs to be targeted.

Q6: Are transfer plasmids replication competent? What is SIN?

A6: Most (if not all) Addgene transfer plasmids are replication-deficient meaning they can be used to create virus that is capable of infecting target cells, but cannot produce any new viral particles after the initial infection.

SIN is shorthand for self-inactivating, which is achieved by deleting a large portion of the 3'LTR in the transfer plasmid. The deletion prevents full-length viral RNA from being produced in target cells and minimizes the risk of generating RCL. In addition the deletion reduces the risk of insertional mutagenesis by limiting the interaction between viral LTR enhancers and the transgene; such interactions can alter expression of not only the transgene but also that of adjacent cellular genes.

Q7: Which genes are deleted or modified to result in replication deficiency? What percent of the vector components are HIV-based?

A7: No single plasmid contains all the components necessary to produce viral particles. The components are divided as follows:

Get Tips on Titering Your Lentivirus

Q8: You mentioned biosafety. What are the major risks when it comes to lentiviruses in terms of biosafety?

A8: According to the American Biological Safety Association, "the two major risks of lentiviral vectors are: 1) the potential generation of replication competent virus [usually HIV-1]; and 2) the potential for oncogenesis through insertional mutagenesis. These risks are largely based upon the vector system used and the transgene insert encoded by the vector."

The table below breaks down the biosafety concerns associated with various aspects of lentiviral transduction along with suggestions on how to lower the risk.

Biosafety should always be considered with respect to the specific experiments being performed and you should understand the guidelines for using such reagents as outlined by your institution or country.

Have any other questions? Feel free to post them in the comments and we would be happy to answer them!

Note: A. Max Juchheim, Marcy Patrick, and Meghan Rego contributed to the writing of this article.

Resources on the Addgene Blog: