This post was originally written by Mary Gearing, in 2018, and updated by Hannah Dotson in Dec. 2022.

Promoters control the binding of RNA polymerase and transcription factors. Since the promoter region drives transcription of a target gene, it therefore determines the timing of gene expression and largely defines the amount of recombinant protein that will be produced. Many commonly-used promoters, such as T7, CMV, EF1A, and SV40, are always active and thus referred to as constitutive promoters. Others are only active under specific circumstances. In a previous post, we discussed inducible promoters, which can be switched from a default OFF to an ON state, and how you might use these in your research. Today, we’ll look at repressible promoters, which can be switched from a default ON to an OFF state, as well as repressible binary systems. In recent years, a number of more complex systems have also been developed which don’t fit in either category, but those are a subject for a future post!

How are repressible promoters regulated?

We’ll look at examples of both natural and engineered repressible promoters.

To turn this inducible system into a repressible system, Gossen and Bujard created the tetracycline-controlled transactivator (tTA). They fused TetR with the transcriptional activation domain VP16 taken from the herpes simplex virus. tTA binds to promoters containing TetO elements (often linked in groups of seven as a Tet Response Element (TRE)), allowing transcription to proceed. When tetracycline or one of its derivatives is added, it binds tTA, resulting in a confirmation change that prevents binding to the promoter and turning transcription OFF.

Despite their bacterial origins, Tet systems function well in mammalian cells, and TRE-containing promoters can be used in the repressible manner described above, as well as the inducible manner detailed in our previous post.

In the past 30 years since the original Tet-Off system was described by Gossen and Bujard, both the promoter and transactivator components of the system have been engineered and improved. Takara’s “2nd generation Tet-Off vectors (Tet-Advanced)” are the most recent variants of the Tet-Off system.  For more information on Addgene Tet plasmids, see our Tetracycline resource page.

Massie et. al developed the cumate-inducible gene expression system, which functions in a similar manner to the Tet system. The transactivator configuration of the system is a positive repressible promoter, and was engineered from the cmt and cym bacterial operons.

A chimeric transactivator, cTA, was created by fusing CymR to the activation domain VP16. cTA binds to promoters containing putative operator sequences (CuO) (linked in groups of 6), allowing transcription to proceed. When cumate is added, it binds cTA, resulting in a confirmation change that prevents binding to the promoter and turning transcription OFF.

The ADH1 negative repressible promoter is commonly used in yeast. In the first 24 hours of culture, when glucose is abundant and ethanol concentrations are low, pADH1 displays low promoter activity (~20% activity of the strong yeast promoter pTEF). As ethanol accumulates, it binds to the repressor, enabling it to bind the promoter and repress pADH1 activity. Researchers have engineered pADH1 variants that are less sensitive to ethanol, including the “middle” ADH1 promoter pADH1m, which maintains activity during the late ethanol consumption phase of yeast culture.

In Drosophila or development studies, you may hear some transcription factor and promoter pairs referred to as binary systems. Binary systems are genetic tools that consist of two parts, both of which must be present for a gene of interest to be expressed. These permit exquisite control of gene expression and tracing of gene expression across development. One common binary system is the GAL4/UAS system isolated from yeast. In this system, UAS basal promoter expression is low but is activated by GAL4 binding to UAS.

If you place the GAL4 gene downstream of a tissue- or developmental stage-specific promoter and design a UAS reporter construct, the reporter will only be expressed where and/or when that promoter is active. In this way, you can interrogate the activity of uncharacterized promoters. Similarly, placing UAS upstream of a transgene permits directed expression of that gene in cells that also express GAL4. Usage of this system revolutionized genetic studies in flies.

An additional component, the GAL80 repressor, adds a repressible element to this binary system (making this a repressible binary system). The GAL80 repressor can bind to GAL4, partially inhibiting the binding of GAL4 to UAS. One can therefore place GAL4 and GAL80 under different promoters and create sophisticated patterns of UAS-driven gene expression. To further increase the complexity of the system, researchers have used split GAL4 architecture or combined the system with Flp/FRT, as reviewed by del Valle Rodriguez et al. 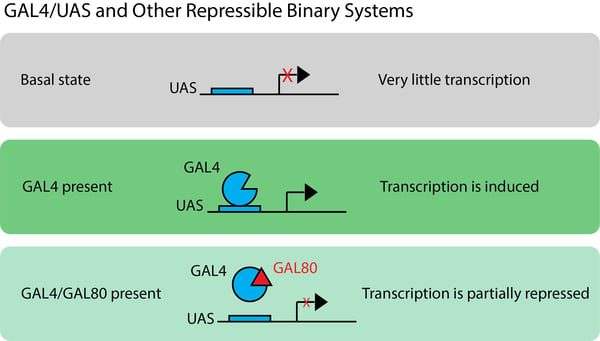 A second binary system is LexA/lexAop, developed by Lai and Lee. LexA/lexAop is a complementary system to GAL4/UAS that functions in essentially the same manner, with LexA binding to the lexA operator (lexAop). Fusing the LexA DNA-binding domain (DBD) to GAL4 or VP16 activation domain results in chimeric GAL80-repressible and GAL80-insensitive activators of lexAop. This system is commonly used with GAL4/UAS to examine the expression of reporter genes, or to combine reporter expression from one promoter with transgene or siRNA expression from the other.

Potter et al. from Liqun Luo’s lab developed the Q system from a gene cluster in the fungus Neurospora crassa. The QUAS promoter is less leaky than UAS in the basal state, and co-expression of the inducer QF can increase QUAS driven expression by ~3,300-fold in Drosophila cells and ~24,000-fold in human HeLa cells as compared to basal expression. Co-expression of repressor QS along with QF leads to intermediate expression from QUAS, as seen with GAL4/GAL80 and UAS. QF-mediated repression is reversible by the addition of quinic acid to Drosophila cells. Work by Wei et al. from Kang Shen’s lab has also shown that the Q system is also functional in C. elegans.

Subsequent work by the Luo and Potter labs has refined the Q system and introduced the second generation QF2 activators. These activators solve the problem of broad QF expression-induced lethality in flies. Riabinina et al. also developed chimeric transactivators GALQF and LexAQF, which activate their respective UAS and lexAop sequences but are also regulated by QS and quinic acid.

You may be wondering, “why is it necessary to have all 3 of the different binary systems above if they all behave very similarly?” The simple answer is that sometimes it is necessary or desirable to control or look at multiple genes at the same time.