In a previous post from our Plasmids 101 series, we learned how the Cre-loxP recombination system can be used to induce site-specific recombination events, and that the orientation of the flanking loxP sites directs the Cre recombinase to invert, translocate, or excise a DNA fragment. The availability of both wild-type and mutant loxP sites has allowed scientists to leverage this system in new, creative ways. Today’s post will focus on one such strategy--the FLEx switch--which utilizes recombination elements to turn off expression of one gene, while simultaneously turning on the expression of another! 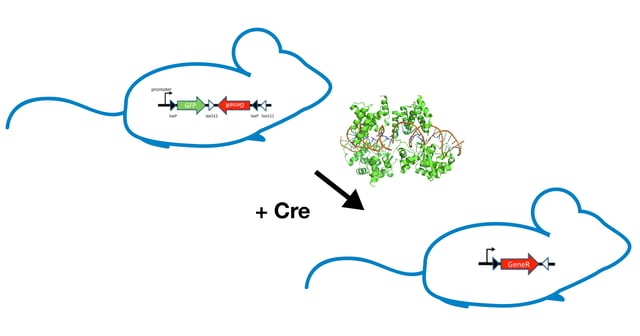 What Are FLEx switches?

FLEx (or “flip-excision”) switches were designed as a genetic tool for researchers to conditionally manipulate gene expression in vivo using site-specific recombination. The FLEx switch takes advantage of the orientation specificity of the site-specific recombinases (SSRs) Cre and FLP. SSRs bind DNA at target sites to induce site specific recombination events: Cre recombinase binds loxP sites, while FLP binds FRT sites. When a DNA sequence is flanked by target sites (floxed) in opposing orientations, a SSR will invert the DNA sequence between the sites. If a DNA sequence is floxed in the same orientation, the SSR will excise the DNA fragment. By manipulating the number, orientation, and type of target sites that flox your genes of interest, a powerful FLEx switch can be created for your specifc experimental needs.

How does the FLEx switch work?

Let’s say you want to design a genetic FLEx switch that turns BFP expression off, while turning on mCherry expression. For this FLEx switch to successfully work, the cassette would need to contain the BFP coding sequence in the sense orientation, followed by the mCherry coding sequence in the antisense orientation (Figure 1, top). The entire DNA cassette would be flanked by two pairs of target sites- one wild-type pair (loxP, black arrowheads) and one mutated pair (for example- lox511, white arrowheads). It is necessary to use two different pairs of target sites for this strategy to work effectively. Both loxP and lox511 are recognized by Cre but lox511 sites can only recombine with other lox511 sites, not with loxP sites. Alternatively, you could use a pair of loxP sites and a pair of FRT sites and include both Cre and FLP recombinases. 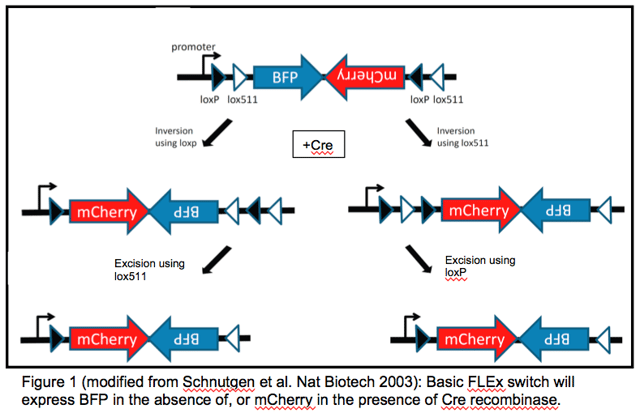 Beyond switching fluorophores, why is FLEx useful?

The power of the FLEx system lies in the ability to conditionally turn off one gene and activate another. In the field of mouse genetics, FLEx is currently being used to study a wide variety of in vivo conditional gene rescue experiments, as well as for improvement of optogenetic adeno-associated virus (AAV) vectors. Listed below are a few additional uses for FLEx switches:

Sometimes also referred to as DiO (Double-floxed inverse Orientation), FLEx systems are generally considered "Cre-On" meaning that your gene of interest starts in the inverse/antisense "off" position and is flipped to the sense (on) orientation in the presence of Cre. A similar strategy can be employed for "Cre-off" (i.e. your gene of interest starts in the sense orientation and Cre is used to flip it to "off"). These Cre-off switches may be referred to as DO (Double-floxed Orientation) and could be used to study the physiology or behavior of certain cell populations.

Acknowledgement:
Through a partnership with genOway, we are able to distribute materials containing FLEx technology. Read the genOway press release for more information.

2. Branda, CS and Dymecki, SM. Talking about a Revolution: The Impact of Site-Specific Recombinases on Genetic Analyses in Mice. 2004. PubMed PMID: 14723844.

Additional Resrouces on the Addgene Blog