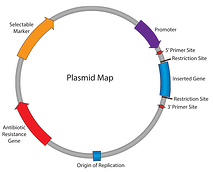 The replicons of plasmids are generally different from the those used to replicate the host's chromosomal DNA, but they still rely on the host machinery to make additional copies. ori sequences are generally high in As and Ts. Why, you ask? Well, A-T base pairs are held together with two hydrogen bonds not three as G-C pairs are. As a result, stretches of DNA that are rich in A-T pairs melt more readily at lower temperatures. When DNA melts, it gives the replication machinery room to come in and get busy making copies.

So many origins, so little time

There are lots of origins of replication out there so, for simplicity’s sake, we've ignored those used in eukaryotic cells and viruses and focused only on those found in bacteria. Some common ones you might see include ColE1, pMB1 (which comes in a few slightly different but well known derivatives), pSC101, R6K, and 15A. Not all origins of replication are created equal. Some will produce many plasmid copies and others produce just a few copies depending on how they are regulated. Generally, control of replication is referred to as "relaxed" or "stringent" depending on whether the ori is positively regulated by RNA or proteins, respectively. A plasmid's copy number has to do with the balance between positive and negative regulation and can be manipulated with mutations in the replicon. For example, the pMB1 ori maintains about 20 copies per cell, while pUC – which differs by only two mutations – will produce as many as 700 copies per cell.

So, how do you choose? Addgene Senior Scientist Marcy Patrick says researchers can ask themselves a few questions to get started: Will the plasmid be used exclusively in E. coli? Gram negative bacteria in general? Both Gram negatives and Gram positives? Will you have only one plasmid type in your cells at a time? Do you want to make a lot of your plasmid? Is the gene toxic in high amounts? It is always good to keep in mind that plasmids with low to medium copy numbers can still express massive amounts of protein given the proper promoter and growth conditions.

Choose your origin of replication wisely

In other words, the best choice of ori depends on how many plasmid copies you want to maintain, which host or hosts you intend to use, and whether or not you need to consider your plasmid's compatibility with one or more other plasmids. Generally speaking, plasmids with the same ori are incompatible because they will compete for the same machinery, creating an unstable and unpredictable environment. As a rule, plasmids from the same group should not be co-transformed, so if you require two plasmids for an experiment, make sure they have "compatible" ori's. See the table below for more details.

Other factors that affect copy number

Although the sequence and regulation of the ori dramatically affect the copy number of a plasmid, other external factors contribute as well. These considerations are especially useful to keep in mind if you are planning to purify your plasmid DNA:

Have any questions? Need something clarified? If so please, post in the comments. Also, let us know if you have any special requests for future Plasmids 101 series topics and stay tuned for the next installment.