Kinases: they regulate many proteins, with ~1/3 of human proteins predicted to be phosphorylated on at least one site. Phosphorylation is particularly important for regulating signal transduction and measuring kinase activity at the single-cell level can aid in drawing connections between signaling activity and cell phenotype. One method for monitoring live single-cell kinase activity is FRET, but FRET reporters are challenging to design and difficult to multiplex. The Covert Lab provides an alternative tool with their Kinase Translocation Reporters (KTRs) whose cellular localization serves as a proxy measurement of kinase activity. The key advantage of KTRs is that they are easy to create and simple to multiplex.

Kinase Translocation Reporters (KTRs) are genetically encoded fluorescent kinase reporters. A KTR is comprised of a fluorescently-tagged substrate for a kinase of interest which is further fused to a bipartite nuclear localization signal (bNLS) and a nuclear export signal (NES), both which are phosphorylatable. Prior to phosphorylation, the KTR localizes to the nucleus, but following phosphorylation bNLS activity is suppressed and NES activity is enhanced, leading to cytoplasmic translocation of the reporter. As a result, the KTR is shuttled in and out of the nucleus depending on its phosphorylation status. The relative ratio of cytoplasmic vs. nuclear fluorescence serves as a proxy for kinase activity. 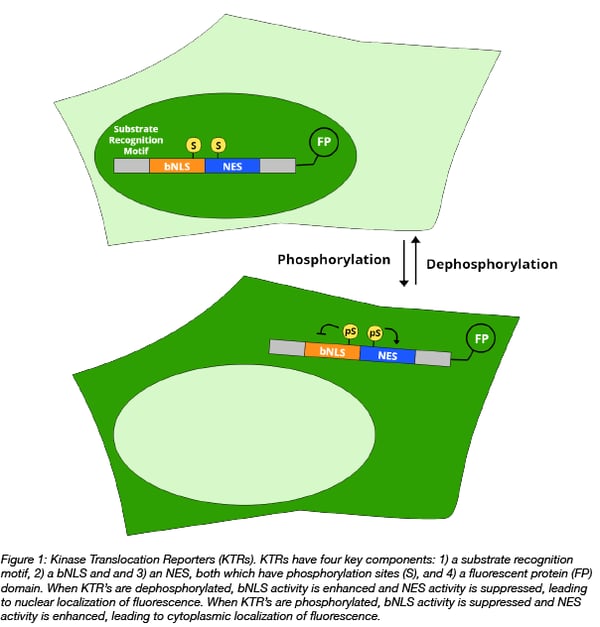 When compared to FRET reporters for measuring kinase activity, KTRs have two key advantages. First, they are easy to multiplex. Their design allows flexible swapping of fluorescent proteins and multiplexing is simple when fluorescent proteins with limited spectral overlap are used together. Second, KTRs are easy to design. The key determinants of KTR function are the positions of the phosphorylatable residues and the bNLS and NES sequences, which have previously been characterized. See Box 1 in Kudo et al. for more details on the design of the bNLS and NES sequences.

KTRs also have some disadvantages when compared to FRET reporters. First, KTRs monitor global kinase activity that occurs in the cytoplasm and/or nucleus, while FRET-based reporters can be used to measure kinase activity in specific subcellular compartments. Second, because KTRs shuttle between the nucleus and the cytoplasm, nuclear export and import rates can influence KTR translocation. Work from the Covert lab suggests that these rates have negligible effect on KTRs, however nuclear translocation rates are another variable to consider when designing KTR experiments. Third, KTRs are not well suited for monitoring kinase activity that occurs during nuclear envelope breakdown (without the nucleus, there’s no nuclear localization to monitor).

Whether you’re looking for a ready-to-use KTRs for p38, JNK, and ERK, or a backbone to use for custom KTR design, plasmids are available from Addgene!