Imagine being able to determine whether two proteins are within 10 nanometers of each other, or measure the tension in the helical structure of spider silk, or the activity of a protein in a synapse. What kinds of tools enable us to measure these properties, and what fascinating experiments could push these tools even further? All of these things can be done using FRET! Read on to find out more about this amazing imaging technique and find further tips for using FRET in your experiments here.

What is this FRET you speak of?

Förster Resonance Energy Transfer (FRET) was originally described by Theodor Förster in 1948 as a variation of the more commonly observed light emission by fluorescence. The widespread use of FRET with fluorescent molecules, including fluorescent proteins, has led to the alternative acronym Fluorescence Resonance Energy Transfer. Unlike the typical excitation and emission of an excited fluorophore, FRET involves a non-radiative transfer of energy (i.e. no emitted photons) from the excited donor fluorophore to the acceptor fluorophore. The typical steps in FRET are:

1. Donor fluorophore excitation by absorption of a photon

2. Energy transfer from the excited donor directly to the acceptor fluorophore--think of it as a virtual photon

3. Relaxation of the acceptor fluorophore back to its ground state by emission of a photon with wavelength specific to the acceptor 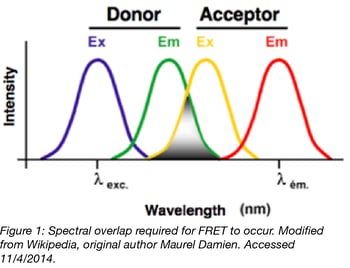 The efficiency of FRET can be measured for a given donor-acceptor pair and a change in FRET efficiency correlates with a change in the distance and/or orientation of the FRET pair. Since many biological processes occur within the typical FRET range, FRET efficiency is used to infer an interaction between the fluorophores and serves as a small-scale ruler to measure distances that are too miniscule for conventional light microscopy.

Don't FRET - Use these FRET resources instead!

As the choice of fluorophore pairs is a key consideration for a FRET experiment, the possibilities can seem overwhelming given the large assortment of fluorescent proteins available. Fortunately, several excellent reviews have collated data from various papers to make the decision easier. 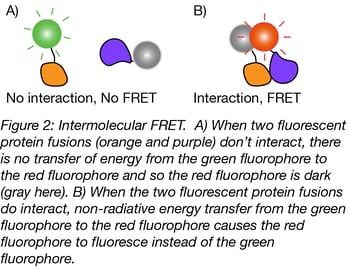 Many empty vectors containing these fluorescent proteins are available on our FRET Resource page and can be used to create fusions with a gene of interest. These plasmids will be most useful for constructing intermolecular FRET probes, where the donor and acceptor fluorophores are fused to two separate proteins. (In contrast, intramolecular FRET probes contain the donor and acceptor fluorophore on the same protein and are useful when a process affects the conformation of the probe. More on these biosensors later on). Experiments using intermolecular FRET probes are typically used for studying protein-protein interactions by measuring the change in FRET efficiency, from which conclusions regarding the proximity of the two proteins can be inferred.

Intermolecular FRET can be experimentally difficult to achieve, because the ratio of acceptor to donor fusions varies with transfection efficiency and any unpaired fluorescent proteins can contribute additional noise to the measurement. If the distance or orientation of the donor and acceptor proteins is not optimal, FRET may not occur or be detected even if the two proteins form a complex. 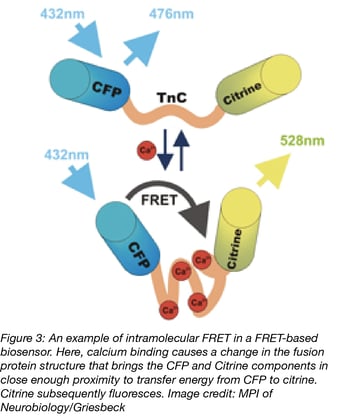 To help troubleshoot your experimental setup as a potential source of error in suboptimal or undetectable FRET, well-characterized FRET reference standards can be used to validate FRET measurements and serve as a type of positive control. In the case of an unfavorable donor-acceptor orientation limiting FRET efficiency, circular permutation (Baird et al., 1999) of the fluorescent protein (i.e. rearranging the start and end positions without changing the order of the amino acids in the protein) may be able to boost FRET efficiency.

Before constructing your own FRET probe, try searching PubMed for articles describing the FRET tool that you are looking for and check our curated list of biosensors too, as another laboratory may have already created the sensor that you need. FRET biosensors designed to measure specific small biomolecules or gene activity are often intramolecular probes, as the linker sequence between the donor and acceptor is sensitive to a change in the environment which alters the FRET efficiency. Detecting certain cellular changes with an intermolecular probe is often either impractical (for biomolecules that are not proteins) or would perturb the endogenous state that you want to measure (overexpressing a gene or protein after transfection).

Recent innovations have demonstrated the use of single-molecule FRET for imaging biomolecules in live cells (Sustarsic and Kapanidis 2015), which may lead to monitoring of these processes in live animals (Hirata and Kiyokawa 2016), and molecular tension microscopy (MTM), which could monitor physical stresses or even apply forces (Gayrard and Borghi 2016) to a selected protein. Overcoming current limitations to permit the use of multiple FRET biosensors simultaneously would further increase the amount of correlated information available from a cellular process. FRET experiments are expected to continue to contribute to our understanding of diseases and even assist in drug discovery.