The aim of behavioral neuroscience is to define brain areas that are linked to a certain behavior. It is a very old branch of science, dating back several hundred years, with historical ties to psychology and philosophy (the mind-body problem). Because of the availability of tools for genetic manipulations, mice have become the model of choice for many behavioral studies, though other organisms such as rats or zebrafish are also used. With the development of viral vectors, behavioral neuroscientists can now precisely control where and when certain genes are expressed to investigate their role in a specific behavior. This blog post will give an introduction to behavioral neuroscience, and address experimental design considerations used in all behavioral studies. 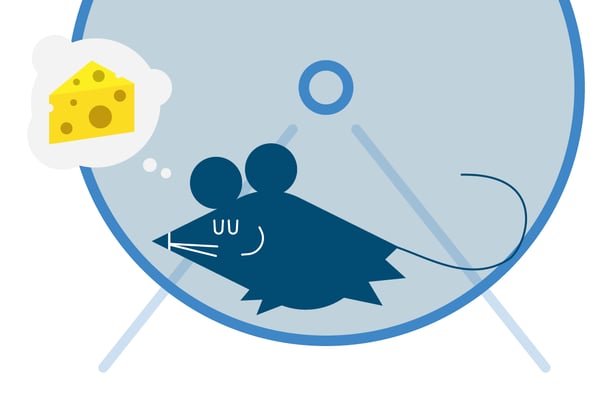 As a general consideration for behavioral testing in a laboratory, a high level of experimental control is required, because seemingly tiny external factors can have a quite noticeable influence on the outcome and cause variability in the testing group. For example, if an experimenter picks up a mouse from the home cage and places it into the experimental setup, the mouse becomes stressed. It will likely move around faster in the following test and skew results measuring locomotion. Mice may need to be given some time to adapt to a testing apparatus. General stress levels of the test animal may also be reduced by daily handling for a few minutes by the experimenter several days preceding the experiment. Handling can however negatively interfere with certain tests and is not always recommended.

Environmental influences like bright light or noise should be avoided as this will also increase stress levels and affect behavior. A fact to consider: Rodents can hear ultrasonic frequencies (> 20 kHz, produced from fluorescent light bulbs, for example) that are outside the humans’ audible spectrum.

The experimental apparatus should be cleaned thoroughly between animals as olfactory stimuli that were left behind from a preceding animal (ex: urine) can be distracting. If it is not cleaned, animals tested towards the end of an experiment series would behave very differently (distracted) from the ones tested at the beginning.

Behavioral testing is often done in conjunction with a genetic manipulation so that behavior can be linked to a specific gene or brain region. When it comes to making the genetic manipulation, there are two main decisions to make: 1. Which modification? and 2. Which viral vector should be used?

Generally speaking, one may want to achieve either inhibition or activation of neurons in a specific brain region. One option is to overexpress a gene that alters neuronal function directly such as receptor subunits or neurotrophic factors. Another option uses optogentics to control neuronal activity, commonly via light-activated ion channels. Similarly, chemogenetic tools are designed channels that are chemically activated. Both are introduced in neurons and depending on the choice of channel protein, they can trigger neuronal excitation or inhibition upon light (or drug) application.

Genetic manipulation can also reduce expression levels of certain genes. A popular method uses Cre recombinase on transgenic flox animals to introduce modifications at the DNA level in a temporally and locally defined manner. This allows scientists to draw conclusions due to gene expression in a specific brain area, avoiding side effects from such modification in other areas. An alternative strategy is to knockdown a gene with RNAi. Here, a short sequence targeting the gene is cloned into a viral shRNA expression vector and the vector particles are delivered into the brain region of interest.

Different AAV serotypes have preferences for specific cell types. For example, AAV1 and AAV9 serotypes have strong neuronal tropism, AAV5 targets both neurons and astrocytes, and AAV4 targets mostly astrocytes. Lentiviral vectors are pseudotyped in most cases with VSV-G that generally mediates broad cell tropism and has a high percentage of neuronal targeting after stereotaxic injection. Find more details about choosing AAV or lentiviral vectors in our previous blog posts.

Viral vectors allow a tight spatial and temporal control of gene expression manipulation. They are injected using a stereotactic frame into a defined brain region that is suspected to be involved in a certain type of behavior (for a review see Stoica et al., 2013). Vector delivery may also be achieved via injection into the liquor of the cerebral ventricles (ICV, intracerebroventricular) to minimize tissue damage; however, the spreading of vector to the area of interest may be very limited with this method, especially in adult animals, and not targeted to a specific area. Some other technical considerations for stereotaxic injections are:

Timing: High expression levels of the viral vector trangenes typically occur two weeks after injection. Therefore, it’s crucial to appropriately time the injection about two weeks before the behavior test. This time window between injection and testing will vary depending on whether it is an overexpression gene, downregulation via RNAi or gene editing/deletion using CRISPR. In some cases, a decrease of the expression efficiency can be observed after several weeks which may also depend on transgene or promoter choice.

By modulating neuronal gene expression and activity, you can use viral vectors to study all sorts of behaviors - from basic types like locomotion and motor coordination to more complex situations such as learning and memory or emotional states, for example anxiety or depression. In upcoming blog posts, we’ll discuss some of these behavioral studies in detail and share ways how scientists have used Addgene’s plasmid repository and viral service for their behavioral studies.