This post was contributed by guest blogger Katrina Armstrong, a Neurophysiology Msc Student at the University of Manitoba.

I knew little about adeno-associated Viral Vectors (AAVs) before starting my graduate program at the University of Manitoba. Our lab has been utilizing chemogenetics (Designer Receptors Exclusively Activated By Designer Drugs, DREADDs) and optogenetics as tools to investigate the roles of certain cell types in locomotion. We have relied heavily upon AAV vectors to deliver chemogenetic/optogenetic constructs into our cells of interest. Although they have a small packaging capacity, AAV vectors were suitable for our needs for the following reasons:

While these benefits make AAVs useful for a wide variety of experiments, care still needs to be taken when selecting which particular AAVs to use for your research. Below I’ll provide some tips that will help you think about how to get started with AAVs. Since my research is rooted in the CNS, my focus will be mostly on the brain, but many of these tips apply to all tissues. 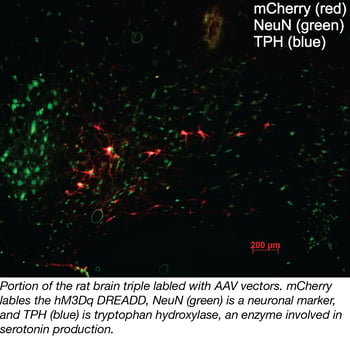 What do buying real estate and using AAVs have in common? The three most important items when looking for a house and choosing an AAV are… location, location, location! Just like this common real estate mantra, the choice of serotype (which determines which tissues and cells an AAV can infect) can influence an AAV’s value greatly. Applying this mantra to AAV selection, there are three important factors related to location.

What is commonly known is that different serotypes have different tropisms but, as you can see, AAVs of each serotype can transduce multiple tissues. So how do you choose the right serotype? Keep asking questions!

Where in the tissue/what cell type?

In the CNS, for instance, there are marked differences among serotypes in their efficiency at transducing different brain regions. Although AAV2 can transduce many tissue types, it has low expression in several brain regions where other serotypes may perform better (3).

This preferential tropism for different brain regions is largely due the ability of different serotypes to infect different cell types. In the CNS, it has been shown that there is variable transduction of oligodendrocytes, microglia, astrocytes, neurons, and inhibitory neurons. Your choice of AAV will depend upon which section you’re looking at (striatum, hippocampus and cortex) within the mouse brain (4). An example from the cortex is outlined in the table below.

What does this mean to us? Well, an AAV user must determine which serotype is most efficient at transducing the cell type under study. Many AAVs will show significant expression in a variety of cell types, but you should try to find the best AAV for your particular experiment!

It has been demonstrated that certain serotypes can undergo axoplasmic transport. These AAVs may move toward the cell bodies of neurons (retrograde transport) or towards the synapse (anterograde transport), which is a possible mechanism for the AAV to infect other cell types not within the vicinity of the injection.

Examining serotypes 1, 8 and 9, not only do they undergo retrograde and anterograde transport, but they also have similar transport characteristics (velocities of movement, distance traveled, etc.) (4). This has also been identified with AAV2 (5), AAV6 (6) and AAV5 at excitatory connections (3).

These facts beg the question: is axonal transport desirable or not desirable?

If diffuse gene expression is tolerated, then axonal transport is fine and a researcher should aim to inject a larger amount of vector using a serotype with strong CNS tropism (4).

If axonal transport is not desirable, transport can be reduced by injecting a smaller dose of AAV and using a serotype with weak CNS penetrance (such as AAV2) (4). Otherwise, using a specific system for controlling gene expression such as Cre-lox, may be sufficient to overcome the transport issues.

2. Failure to plan (for storage) Is planning to fail

Of course, one cannot truly predict the perfect titer, but one of the main recommendations when using AAVs is to avoid freezing and thawing. Although more stable than other viruses, multiple freeze thaw cycles can still reduce AAV titer. For long term storage, make > 25 μl aliquots in 0.5 ml tubes, snap freeze in liquid nitrogen or a dry ice/ethanol bath, and store at -80° C. Once thawed, the AAV aliquot should be used quickly.

3. Patience Is Bitter, but Its Fruit Is Sweet

If you require a quick onset of expression, AAV may not be the best tool to use. However, we are starting to see that gene expression really does not take much time at all. Much of the previous literature using AAVs for DREADD delivery indicates ~7-21 days are required for the onset of gene expression. However, it has yet to be determined what gene expression looks like at 3 days vs 7 days vs 14 days etc. To decrease the time until expression, it is possible to use AAV constructs with self-complementing structure (scAAV) (7). As single stranded DNA viruses, AAVs normally require second strand synthesis before gene expression begins. ScAAV avoid this rate limiting step and can immediately undergo replication and transcription. However, with scAAV the effective genome size usable is shortened (from ~4.8 kB [8] to ~2.3 kB [9]).

What new types of research may be enabled by the use of AAVs?

In our lab, we use AAV-DREADD complexes to study neural function. Often the reporter proteins associated with these complexes are so robustly expressed that anatomical assessments can be easily performed too. While I implied that axoplasmic transport of AAVs is a potential problem in many experiments, a group of researchers has identified this feature of AAVs as a new tool for neuroanatomical tracing (11). With the ability to produce neuron specific transfection using Cre-lox, this new method could allow for labeling of neurons showing a very specific phenotype. Previous neural tracing methods used viruses that were potentially toxic and would result in cell death. With several new constructs becoming available, AAVs could be much better tools for neural tracing in very specific cell populations.

I’m particularly interested in using chemogenetic and optogenetic AAV-based tools to study neural control. Surprisingly, little research has compared and contrasted optogenetic and chemogenetic receptors delivered by AAV within the same cell types. Not only can we compare these methods in specific applications, we may also be able to use these comparisons to enhance our understanding of receptor physiology and the effects of metabotropic and ionotropic influences on overall cell function. AAVs are the most appropriate vehicle for this type of research, as they are safe to use in vivo.

3) The use of AAVs in humans

AAVs are already being used to treat disease in humans and additional improvements are being made to make them even more useful for therapeutic purposes. The University of Pennsylvania and the biotechnology firm Biogen have recently collaborated to develop “AAV 3.0”, vectors that will have substantially improved performance profiles and should be suitable for genome editing. These vectors can be used to improve targeted therapies for the eye, skeletal muscles, and the central nervous system.

Currently, AAVs are being used to deliver CRISPR/Cas9 but have the potential to deliver other therapeutic molecules such as microRNAs (miRNAs), short hairpin RNAs (shRNAs), antisense oligonucleotides (ASOs), zinc finger nucleases, and many others (12).

The most attractive potential of AAVs is their ability to be used with new exciting technologies (such as CRISPR/Cas9) as they allow for gene delivery in an efficient and non-pathogenic fashion. Work improving AAV tissue tropism, transduction efficiency, and safety profiles should strengthen its appeal for the scientific and medical communities.

Katrina Armstrong is a Neurophysiology Msc Student at the University of Manitoba. Her project is examining the use of DREADDs (Designer Receptors Exclusively Activated By Designer Drugs) to determine the role of serotonin in movement. Follow her on twitter @katrinaboards.