Adeno-associated virus (AAV) has many features which make it a great viral vector, but its packaging capacity is limited to ~4.7kb, or roughly half the packaging limits of lentiviral and adenoviral vectors. While many transgene will fit within this limit, some like prime editing's PE2 enzyme do not. So how do you fit a big gene into a tiny vector like AAV? By breaking the transgene into smaller pieces.

First, some history. In 2008, the Auricchio lab decided to solve the issue of “tiny vector, big transgene” by just straight up packaging an oversized genome of ~9 kb into AAV. They found that in defiance of the packaging limit dogma, this AAV successfully mediated transduction and expression of the full-length transgene in vitro and in vivo (Allocca et al., 2008). Shortly after though, three groups independently tried reproducing these results and determined that even when larger vector genomes are packaged, the physical size of the genomes is still ~4.7kb. But despite this, larger functional transgene products were produced following transduction.

So what’s going on here? The working model is that the oversized AAV genomes are fragmented or truncated when packaged and then following transduction, the partial genomes complement each other to restore the full-expression cassette. AAV’s natural ability to reassemble fragmented genomes is the basis of several split vector approaches developed in the early 2000’s which allow researchers to deliver oversized cargo (Hirsch et al., 2010).

Split vector approaches increase the size of the gene delivered by splitting the gene into two pieces: part A and part B. Each piece of the gene is then independently packaged into an AAV. When a cell is co-infected with both part A and part B AAVs, the fragments reassemble and produce the full-length gene. Below are overviews and drawbacks of four split AAV vector approaches.

Overview: The overlapping strategy has a region of homology, typically ~400-1400 bp long between part A and B of the transgene to reconstitute the full-length transgene (Chamberlain et al., 2016). It’s generally accepted that some form of homologous recombination (HR) occurs via this region of overlap, but the exact mechanism is not yet known. 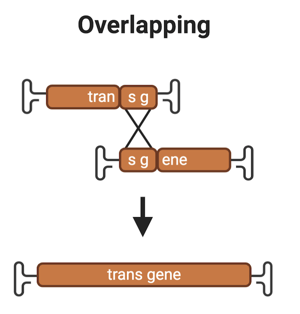 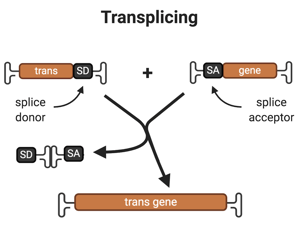 The splice site donor and acceptor sequences and the homologous region of the two vectors can be from one of the transgene’s endogenous introns or comprised of non-endogenous sequences, such as a 77bp long highly recombinogenic homology sequence derived from the filamentous phage F1 (Trapani et al., 2014). 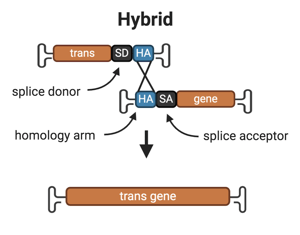 Overview: The sequential homologous recombination approach delivers large donor templates using two sequential homology directed repairs (HDR) with CRISPR/Cas9. Donor A contains: 400bp homology arms to the site in the genome being targeted for integration, “part A” of the transgene, the gRNA target site that mediated the donor template’s integration so that the site is reconstituted after integration; and a sequence of stuffer DNA after the gRNA target site. 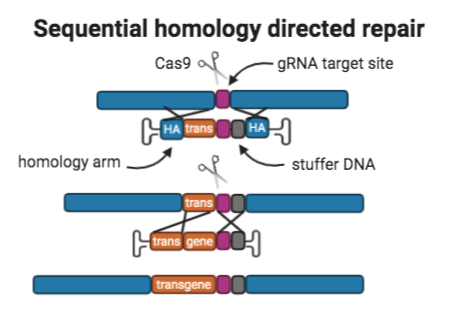 Donor B contains: 400 bp homology arms to donor A,and “part B” of the transgene.

These two AAVs are co-transduced in a single step and serve as donors for two consecutive CRISPR-mediated HDR events which results in the integration of a larger donor template.

How to pick a split AAV method

While the hybrid dual vector system has a slight advantage over the overlapping and trans-splicing approaches since there are two ways for a transgene to be reconstituted, there is currently no one ideal split vector system. Overall the efficiency of transgene expression from split vectors has been inconsistent. A greater understanding of basic AAV biology, however, would help improve split vector strategies and lead to greater and more consistent transgene expression.