CRISPR genome editing has made it easier to create knockout alleles in a variety of species, including the standard laboratory mouse. It’s also made targeted insertions relatively simple in C. elegans and bacteria. But CRISPRing typical mouse models, including creating Cre-dependent conditional alleles, has remained a challenge. Enter Easi-CRISPR: a method that harnesses the power of ssDNA donor molecules for homology directed repair. Using long ssDNA donors, the Gurumurthy and Ohtsuka groups have obtained an average knock-in efficiency of 30-60%. This is much more favorable than previous methods yielding 1-10% knock-in. Read on to learn how you can make CRISPR mouse model generation easi-er! 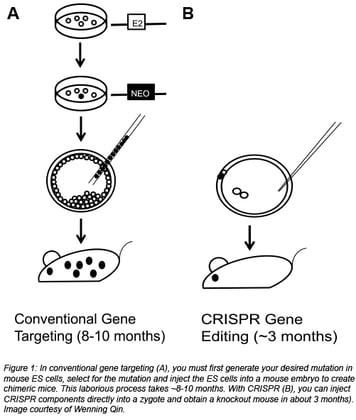 The process of generating knock-in mice pre-CRISPR was very arduous. First, you’d construct a plasmid with your desired changes, long homology arms and a selection marker, then electroporate it into mouse embryonic stem cells. After selecting for clones with the recombined product, you’d microinject into blastocysts to be implanted in pseudopregnant female mice. If you obtained the desired chimeric mice, you would breed them many times, hoping to produce a mouse with the desired edit. You’d also need to remove the selection marker, likely by breeding to a mouse line with a recombinase. If it turned out your chimeric mice did not contain edited germ cells, your experiment would be unsuccessful.

CRISPR made the overall process of mouse model generation simpler, as described in an earlier post on generating CRISPR mouse models. For simple knockout alleles or point mutations, the 8-10 month process of conventional gene targeting is lowered to about 2-3 months. But certain models remain more difficult to make. For example, large insertions, like a fluorescent protein knock-in, suffer from low efficiency when a standard dsDNA repair template is used. The original design for creating a conditional allele, or floxed mouse, from Yang et al. requires two gRNAs targeting two intronic regions and two repair templates in order to insert two loxP sites. Since two double-strand breaks are made, it is common to see deletions of the region between the gRNAs. A variety of other undesired outcomes, including one loxP site insertion and one NHEJ-repaired indel, often occur.

Short single-stranded DNA templates have been shown to improve the efficiency of homology directed repair, with researchers hypothesizing that they can efficiently integrate into the DNA through an HDR subpathway. It's traditionally been difficult to produce long single-stranded DNA, but Miura et al. (2015) developed the ivTRT method to ameliorate this problem. Briefly, you design your donor template to include a T7 promoter upstream of the left homology arm, perform in vitro transcription, and use the IVT product as a template for reverse transcription to create your ssDNA. Note that the T7 promoter will not be included in the final ssDNA template. 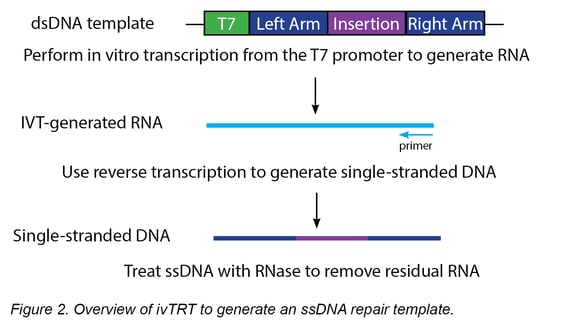 To design a knock-in allele at a given location, you’ll need to design only a single guide and your donor ssDNA. Here, we’ll use the example of inserting a 2A-FlpO cassette into the Fgf8 gene. Miura et al. (2018) suggest using a 50-80 bp sequence around the desired insertion site to search for potential gRNAs. As with other homology-directed repair experiments, you’ll want the guide cut site to be as close as possible to your desired insertion site to maximize HDR efficiency. In this case, we’re fortunate that there’s a guide that directs cleavage right before the stop codon! 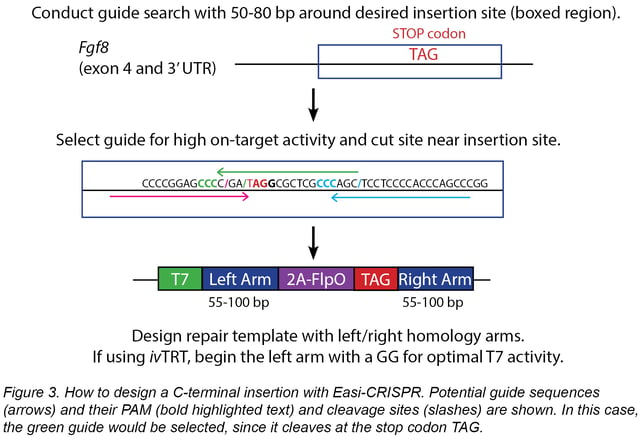 Design your repair template with 55-100 base homology arms upstream and downstream of the insertion site. If you are using the ivTRT method, try to make the first two bases of the left homology arm guanine (i.e. GG); this design has been shown to increase T7 promoter activity. To avoid re-cutting by Cas9 after editing, make sure that the repair template does not contain the wild type gRNA target site and adjacent PAM. Your knock-in design may naturally remove the gRNA sequence or place it far from the PAM; if not, you can add a silent PAM or guide mutation.

The design for a floxed conditional allele requires you to target 2 loxP sites to intronic regions 0.5 - 0.8 kb apart. In the example below, we’ll add loxP sites for conditional deletion of exon 6 of Syt1, mimicking a previously made mouse model. To avoid disrupting splice donor/acceptor sites, Miura et al. (2018) recommend targeting sites at least 100 bp away from the target exon on either side. They have successfully used guides targeting the same or complementary strands, as well as guides facing towards or away from each other. 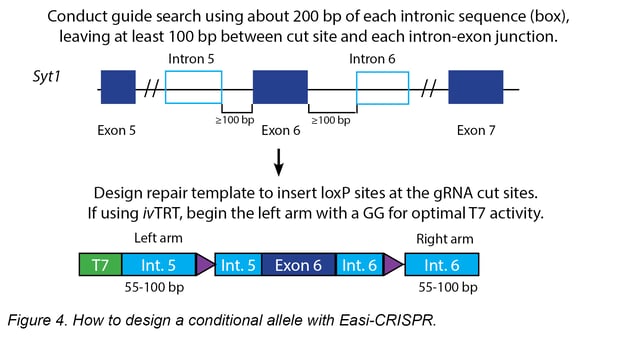 As in the knock-in example, you’ll design your repair template with 55-100 bp homology on each side. For optimal repair, place the loxP sites precisely at the cut site for each guide. This design also separates the gRNA target sequences from their PAMs, preventing re-cutting after editing.

How to use Addgene plasmids for Easi-CRISPR 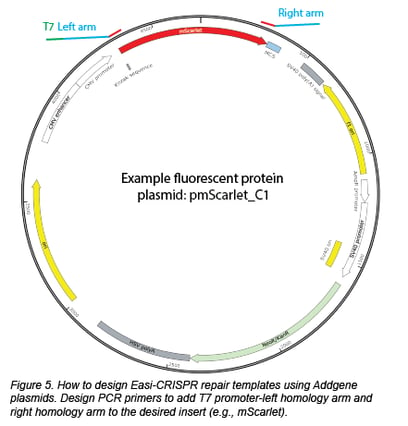 You can use Addgene plasmids to create a repair template! If you have a plasmid with your desired insertion feature (e.g., a fluorescent protein), you can amplify the desired region using primers containing the homology arms on both sides and the T7 promoter on one end. Typically, Easi-CRISPR works best with insertions of 2 kb or less. Luckily, most of the commonly used cassettes, such as fluorescent proteins (EGFP, mCherry etc.), recombinases (Cre, Flp etc.), and tetracycline drug induction systems (ttA or rtTA) are between 1 to 2 kb in length. There are plenty of Addgene plasmid options for templates - see the example at right using blue flame plasmid pmScarlet_C1! After creating the T7-DNA template, you'd use ivTRT to create the ssDNA construct as described in Figure 2.

You can also use Addgene plasmids to purify Cas9 protein. The table below contains some of our favorites, all of which have blue flames.

Using RNP delivery and microinjection, the efficiency of Easi-CRISPR for simple knock-ins and floxed models varies from 8.5-100% of pups born, with typical efficiencies of 30-60%. Quadros et al. attribute much of this variation to differences in guide RNA efficiency. For example, in a two-guide floxed experiment, if one guide cleaves less efficiently than the other, a partial insertion could be observed. The chromatin structure of the target locus may also influence efficiency. However, Quadros et al. saw success with Easi-CRISPR across three independent core facilities for 13 projects, with most projects requiring only 40-60 zygotes to generate a correctly edited founder. 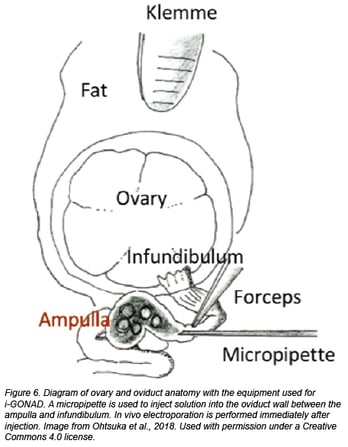 The research groups responsible for Easi-CRISPR have also recently developed i-GONAD as a simple method for delivery of genome editing components to the germline. In contrast to standard microinjection, i-GONAD is performed directly on pregnant female mice using a small incision that exposes the ovaries and oviducts. After solution injection into the oviductal lumen, tweezer-type electrodes are placed to mediate electroporation.

Ohtsuka et al. compared traditional microinjection and i-GONAD knock-in efficiency using a small ssDNA, and they found comparable efficiencies (52 vs 49%). In contrast, Easi-CRISPR with a long ssDNA donor was less efficient using i-GONAD (15%) vs. microinjection delivery (25-67%). However, microinjection does require 2.5x more animals than i-GONAD and is a more technically difficult process. Overall, the main drawback of i-GONAD is that it requires a high-concentration, column-purified DNA template.

Many thanks to Channabasavaiah B. Gurumurthy, Masato Ohtsuka, and Rolen M. Quadros for assistance with editing this blog post.