In the summer of 2013, a remarkable nine papers describing CRISPR/Cas9 genome engineering methods for C. elegans were released, signaling a new era in C. elegans research. Homology directed repair (HDR), which enables insertion of custom genomic modifications, is very robust in C. elegans, and the methods for HDR-mediated modification continue to be improved. New work from Bob Goldstein’s lab at the University of North Carolina has made CRISPR in C. elegans even easier - now, one can generate a fluorescent protein fusion, transcriptional reporter, and loss-of-function allele in just one injection step! The entire protocol takes about 2-3 weeks but requires less than eight hours worth of hands-on time.

Multiple features of C. elegans have made CRISPR/Cas9 so successful in this species, namely, the robust HDR mentioned above, an accessible germline, and multiple selectable markers. Bob Goldstein’s lab previously used a transgene selection strategy for their C. elegans/CRISPR experiments, but this strategy required the use of unhealthy, difficult-to-inject unc-119(ed3) animals, as well as a second injection step to remove the selection marker. Other labs have used PCR-based screening to detect mutants, but this method limits screening to a few hundred worms, making the detection of rare events difficult.

Dickinson et al. sought to create a new and efficient selection-based CRISPR/Cas9 method to generate knock-ins on any genetic background. Their new method uses a selection cassette containing genes for hygromycin resistance and the Roller movement phenotype. To make these markers easy to remove after injection, they added flanking loxP sites and a heat-shock inducible Cre to generate a self-excising cassette (SEC). 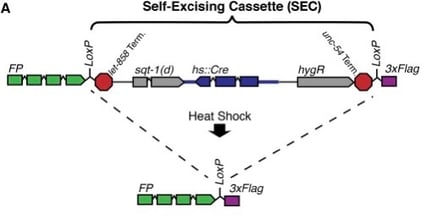 Self-excising cassette schematic from Dickinson et al. Used with permission from the Genetics Society of America.

To use this SEC-based system, first design and clone 500-700 bp homology arms for your gene of interest into the FP-SEC vector using Gibson assembly. This construct will serve as the repair template plasmid to create fluorescent and 3xFLAG-tag fusion proteins.

The repair template and Cas9-sgRNA plasmid is then injected into the germline of young adult worms. Once the worms have laid eggs, hygromycin is added to the plates to select for candidate knock-ins. These candidate animals can then be further screened based on their Roller phenotype. If SEC is inserted at the 5’ end of a gene, the SEC separates the targeted gene from its promoter, creating a loss-of-function allele as well as a promoter-FP fusion for the gene of interest. L1/L2 larvae from these strains are then heat shocked to remove the SEC and after 5-6 days of growth, wild-type animals that have undergone SEC excision are screened based on the loss of the Roller phenotype. These animals contain a fluorescent protein fusion for the targeted gene.

After initial testing, Dickinson et al. tested this system across 7 genes in parallel; when they injected 60-80 animals per gene, they obtained the desired insertions on the first attempt for 6/7 genes. The data are clear - the SEC-based system is both simple to use and highly efficient for C. elegans genome modification. 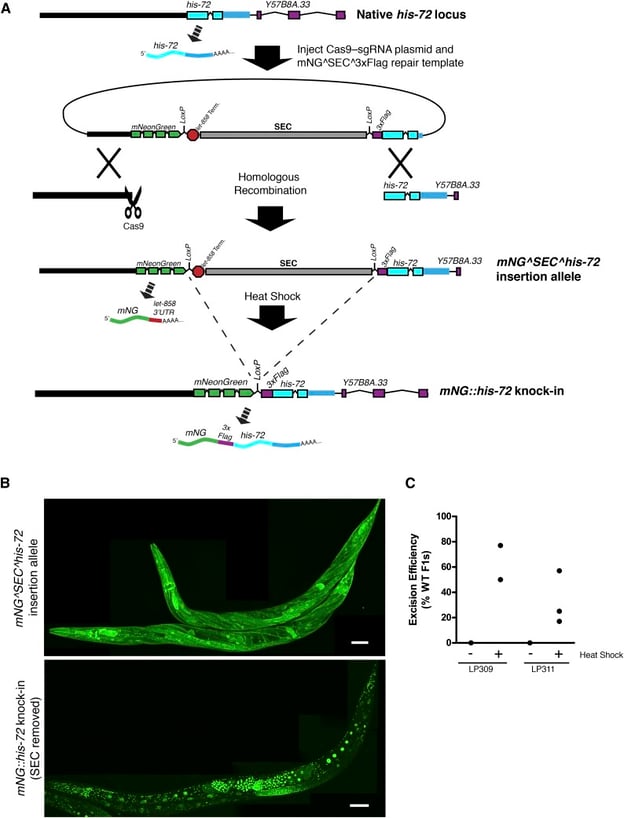 Schematic from Dickinson et al illustrating the steps to fluorescently tag a C. elegans protein. The his-72 locus is shown as an example. Used with permission from the Genetics Society of America.

Applications of this system

Dickinson et al. have developed a modular system that requires very little hands-on labor and could facilitate the tagging of every protein in the C. elegans genome. Although they tested fluorescent protein fusions, this system could be used to make many other genome modifications, including targeted mutations. SEC-based systems may prove effective in other species or in cell culture. In addition to CRISPR/Cas9 applications, SEC selection could replace other, more restrictive C. elegans selectable marker systems. This novel, rapid, and user-friendly system represents another leap forward for the CRISPR/Cas9 revolution!

Other strategies for CRISPR/Cas9 editing in C. elegans: