One alternative approach, which avoids many of these complications, is to directly deliver a ribonucleoprotein (RNP), consisting of the Cas9 protein in complex with a targeting gRNA, to your cells of interest. Cas9 RNPs are capable of cleaving genomic targets with similar efficiency as compared to plasmid-based expression of Cas9/gRNA and can be used for most of the current genome engineering applications of CRISPR including: generating single or multi-gene knockouts in a wide variety of cell types, gene editing using homology directed repair (HDR), and generating large genomic deletions.

What are the advantages of Cas9 RNPs?

There are many advantages to using RNPs for CRISPR experiments.

You’ve decided to use RNPs, now what?

The first step in this type of CRISPR experiment is the generation of the RNP complex.  While one option is to purchase the Cas9 protein and a gRNA from a commercial vendor, this can often be expensive. An alternative approach is to express and purify His-tagged Cas9 from E. coli using a plasmid such as pET-28b-Cas9-His from Alex Schier’s Lab. gRNAs can be in vitro transcribed from ssDNA, which can be generated by commercial vendors such as IDT. These two components are then incubated together to form the RNP. Detailed protocols outlining these steps have been made publicly available by both the Jacob Corn and Alex Schier laboratories. 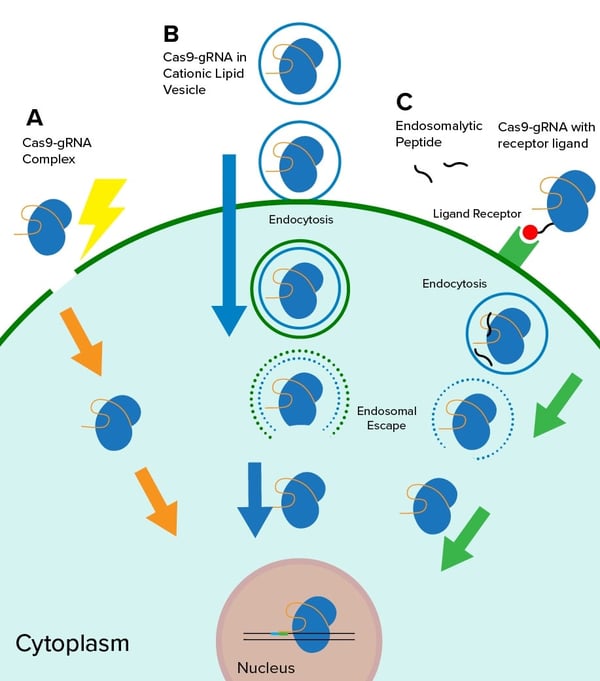 Other techniques, such as lipid-mediated transfection (B in the figure above), are in the early stages of development. David Liu’s Lab has demonstrated the use of cationic lipid-mediated methods to deliver Cas9-gRNA RNPs to hair cells in the mouse inner ear (Zuris et al. 2015). A more targeted approach using RNPs has recently been described in vitro, with the hope of eventually using this method for in vivo applications. This technique utilizes Cas9 proteins harboring receptor ligands (C in the figure above), which result in the internalization of Cas9-gRNA RNPs by specific cell types (Rouet et al. 2018). This was accomplished using a Cas9 mutant (Cas9M1C/C80S) that harbors two surface exposed cysteines, including the native C547, allowing for ligation to pyridyl disulfide-activated ligands.

The Cas9-gRNA RNP method provides scientists with an additional means to deliver CRISPR components to their experimental systems of interest. Using this method can alleviate many issues that may arise when using plasmid based systems, most notably the ability to perform CRISPR studies in cells that are difficult to transfect or transduce. While using Cas9-gRNA RNPs may require the production of the Cas9 protein and a gRNA in your laboratory, once these have been acquired, genomic editing can be performed rapidly and, in many cases, with reduced chance for off-target effects. As the CRISPR field continues to evolve, it is likely that the use of RNPs will play an important role in its continued advancement.