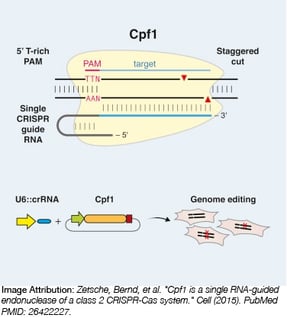 In 2015, Feng Zhang’s lab characterized two Cpf1 nucleases, distant cousins of well-known Cas9. Cpf1 cleaves DNA in a staggered pattern and requires only one RNA rather than the two (tracrRNA and crRNA) needed by Cas9 for cleavage. Now, two new studies show that Cpf1 displays lower off-target editing than Cas9, confirming that this protein is well suited for genome editing.

Type II CRISPR systems based on Cas9 were thought to be the simplest CRISPR systems and the easiest to adapt to genome editing, but the introduction of type V Cpf1-driven systems added another option to the CRISPR toolbox. When Cpf1 was first discovered, researchers wondered if it could overcome some of Cas9’s shortcomings. Cpf1’s preferred PAM is 5’-TTN, differing from that of Cas9 (3’-NGG) in both distribution and GC-content, which might improve editing in AT-rich genomes. Additionally, whereas Cas9 generates blunt ends 3 nt upstream of the PAM site, Cpf1 cleaves in a staggered fashion, creating a 5 nucleotide 5’ overhang 18-23 bases away from the PAM. Cpf1’s staggered cleavage pattern opens up the possibility of directional gene transfer, analogous to traditional restriction enzyme cloning. Sticky-end mediated gene transfer would be particularly helpful for targeting non-dividing cells, which are difficult to modify through homology-directed repair.

Both Cpf1 and its guide RNAs are smaller than their SpCas9 counterparts, so they will be easier to deliver in low-capacity vectors like AAV. AAV (adeno-associated viral vectors) are commonly used for in vivo gene delivery due to their low immunogenicity and range of serotypes allowing preferential infection of certain tissues. However, these vectors have a low genetic capacity of ~4.5 kb. At 4.1 kb, SpCas9 barely fits into AAV when you add in a gRNA and regulatory elements. To solve this problem, the Zhang lab has previously used SaCas9 (1053 aa/3.2 kb) with AAV vectors for efficient postnatal editing. LbCpf1 and AsCpf1 are 3.7 kb and 3.9 kb in length, respectively, larger than SaCas9 but smaller than SpCas9. These nucleases should fit well into AAV vectors, especially given that Cpf1 gRNAs are also shorter than those needed for Cas9 (42 nt vs 100 nt.) However, the newly described non-CRISPR protein NgAgo is smaller than any of these options (2.7 kb with 24 nt guides), so it has the potential to eclipse any of the CRISPR nucleases in AAV-based applications. Cpf1’s strength may lie in its low off-target editing rates, determined using sophisticated genome-wide analysis. At many of its computationally predicted off-target sites, Cpf1 does not mediate detectable off-target cleavage. Most gRNAs directed low-frequency Cpf1 cleavage at 1-12 off-target sites; in contrast, SpCas9 may cleave at ~90 sites, according to Kim et al. Kim et al. also compared the ratio of total off-target to on-target modification for AsCpf1 and LbCpf1, and found that both orthologs show lower off-target activity than that previously observed with SpCas9. Kleinstiver et al. suggest that AsCpf1’s off-target rate is similar to that of high fidelity Cas9s eSpCas9 and SpCas9-HF1. Both AsCpf1 and LbCpf1 ribonucleoproteins (RNPs) failed to induce off-target editing in a cell culture model.

What we still don't know about Cpf1

In their original paper characterizing Cpf1, Zetsche et al. suggested that Cpf1 may improve the frequency of homology-directed repair (HDR) over non-homologous endjoining (NHEJ). Cas9-mediated NHEJ usually destroys the PAM site due its proximity to the cleavage site, preventing future edits. In contrast, since Cpf1 cleaves relatively far away from the PAM, NHEJ might retain the PAM site. Therefore, if HDR does not initially occur after Cpf1-mediated cleavage, the continued presence of the PAM may give Cpf1 the ability to cleave again and possibly mediate HDR in a “second chance” mechanism. To prevent new editing post-HDR, repair templates should remove the PAM sequence.

Many research and clinical applications require HDR over NHEJ, so comparing HDR efficiency across CRISPR nucleases and NgAgo is an important next step for the field. Based on what we know now, Cpf1 may be the best option for HDR, but this possibility has not been experimentally confirmed. Researchers have also not yet characterized the potential “sticky end” transgene insertion mediated by Cpf1-generated overhangs. Exploring the efficiency of these two processes will help us better understand where Cpf1 fits into the genome editing landscape.