There are a lot of ways to classify antibodies: monoclonal, polyclonal, scFvs, nanobodies, and the list goes on. But have you heard of an antibody isotype? An isotype determines several key characteristics of an antibody as well as the role it plays in an immune response. But what is an isotype? How many are there? Why do they matter? And how do antibodies switch isotypes?

What is an isotype?

Why are antibody isotypes important?

To your immune system, an antibody’s isotype is important because it determines what immune cells and molecules are recruited by the antibody to help destroy and remove a pathogen. Different isotypes also appear at different stages of an immune response. There are three main pathogen clearing functions or effector functions of the constant regions of antibodies, although not all isotypes have the same ability to activate each of these functions:

When using antibodies in the lab, it’s useful to know the isotype of an antibody so you can select an appropriate isotype control. An isotype control has the same constant heavy chain domain as your primary antibody but doesn’t bind your antigen of interest. Isotype controls are used to make sure the staining you see is due to target-specific antibody binding rather than nonspecific background staining. Isotype controls are used in antibody-based applications including flow cytometry, immunohistochemistry, immunocytochemistry, ELISAs, and Western blotting.

The five isotypes of antibodies

Differences in their heavy chain constant regions result in several unique physical characteristics of these five isotypes, such as the number and location of disulfide bonds, the number of constant domains, and the hinge region length.

Now for some essential isotype nomenclature. Antibody heavy chain proteins as well as the genes that encode those proteins are designated by the lower-case Greek letters μ, δ, γ, ε, and α. Some isotypes have different versions or subclasses that have minor differences in their heavy chain constant domains. These are typically numbered, i.e. IgG1, IgG2, etc.

Let’s dive in and meet each of the isotypes.

This isotype is produced during a primary immune response because all B cells begin by expressing IgM. IgM has a pentamer structure, which means each IgM molecule has a binding capacity or valency of 10 antigens. An extra constant domain replaces the hinge region in IgM antibodies. IgM has no subclasses and is found mostly in blood.

While IgD is coexpressed with IgM on the surface of most immature B cells, its function is unknown. It has a monomer structure with a valency of two and has no subclasses.

IgG is the most abundant isotype in blood, but it’s also found in tissues. IgG is the predominant isotype during a secondary immune response, which is when the immune system encounters  an antigen for a second or subsequent time. It is expressed as a monomer with a valency of two. There are four IgG subclasses, numbered based on their abundance in blood: IgG1, IgG2, IgG3, and IgG4.

IgE antibodies help protect against parasites but also play a role in allergies. They are found bound to IgE receptors on the surface of basophils and mast cells, two types of white blood cells involved in allergic reactions. There are no IgE subclasses and they are expressed as monomers with a valency of two.

IgA antibodies are found in blood, where it’s the second most common antibody after IgG; but it's the most prevalent antibody in secretions (e.g. tears, saliva, mucus) where it protects mucosal membranes. This isotype is most commonly a dimer with a valency of four. There are two IgA subclasses: IgA1 and IgA2.

Isotype switching occurs when a B cell changes which heavy chain constant domain it pairs with its variable chain domain. B cells start by co-expressing IgM and IgD antibodies, but later in an immune response, the variable region of an antibody is paired with any of the other isotype heavy chain constant domains. This switching helps B cells adapt during the course of an immune response since it also changes the effector function of the antibody.

Isotype switching is caused by a specialized type of DNA recombination. Heavy chain constant genes are clustered together downstream of the variable region gene in this order: μ, δ, γ, ε, and α. An antibody variable gene is initially expressed with the IgM and IgD constant domains because they are the first constant domain genes in the cluster. However, when B cells switch to expressing a different isotype, the intervening DNA sequence is deleted, which places the variable region next to a different constant domain gene. For example if a B cell switches to producing IgE antibodies, the gene segments for IgM, IgD, and IgG are deleted. 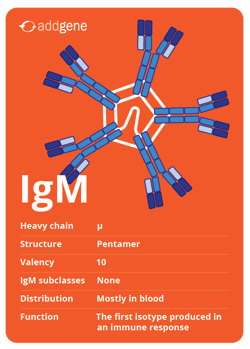 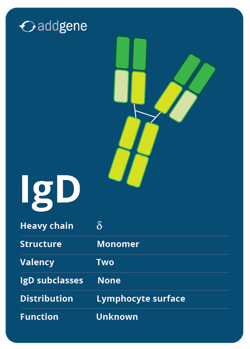 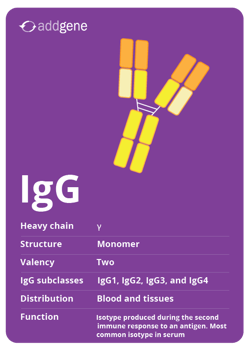 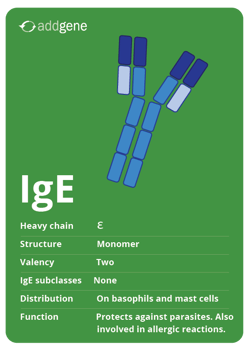 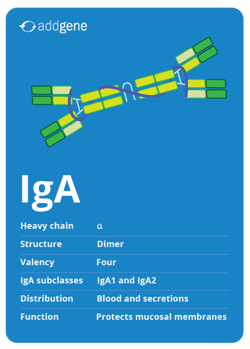