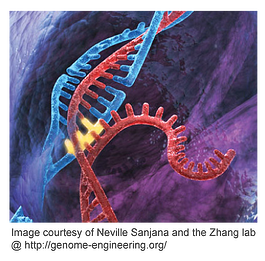 It’s clear that CRISPR-Cas9 technology has really changed the game for anyone looking to quickly and easily manipulate specific genes. But what if you want to study genes all across the genome? Two new human lentiviral CRISPR library systems described in companion papers in Science in December were developed as an answer to that question. Additionally, a concurrent Nature Biotechnology article describes the development of a mouse lentiviral CRISPR library.

“This enables you to do customized genetic modification on a scale that was really not possible before,” said the Broad Institute's Ophir Shalem. “Whole regions of the genome which were not accessible before are now accessible using this technology.”

Using lentivirus as the delivery vehicle, Neville Sanjana, also of the Broad Institute, said they were able to produce a very diverse population of cells within a lab dish in a matter of a few days. Their library, which they call GeCKO, targets 18,080 human genes with 64,751 unique guide sequences to enable both negative and positive selection screening.

They and their colleagues including Feng Zhang used the GeCKO library to identify genes essential for cell viability in cancer and pluripotent stem cells. In a melanoma model, they also went in search of genes involved in resistance to the cancer drug vemurafenib.

The 6 available enriched lentiviral CRISPR libraries developed by MIT's Tim Wang and colleagues, including David Sabatini and Eric Lander, comprise 73,171 guide RNAs (gRNAs) covering a total of 7,114 human genes. Unlike the GeCKO library, each library has been enriched for different gene targets. These pooled libraries include enrichment against kinases, cell cycle proteins, and more.

“In the past, genome engineering with CRISPRs was limited to modification of a few loci at a time,” Wang said. “It was very difficult to screen in a pooled fashion or to go after thousands of targets at once. That’s what our plasmids allow.”

Wang’s library is designed to target a smaller set of genes and it includes more guides per gene. The Sabatini/Lander library uses sequential infection first of Cas9, then with the sgRNAs, and can result in a higher titer due to the smaller size of the plasmids. The Zhang lab, on the other hand, uses a 1 plasmid, single infection system.

The Yusa lab has leveraged the CRISPR system to target all 19,150 mouse protein coding regions with 87,897 unique gRNAs. Their gRNA library is delivered via lentiviral infection into target cells that have previously been stably transfected for Cas9 expression. The Yusa lab has used their library to screen for genes involved in bacterial toxin resistance, identifying 4 previously unknown genes.

“With this work, it is now possible to conduct systematic genetic screens in mammalian cells,” David Sabatini, a senior author of one of the Science papers, told the Broad Institute. “This will greatly aid efforts to understand the function of both protein-coding genes as well as non-coding genetic elements.”

These lentiviral libraries and their demonstrated application offer proof-of-principle that CRISPR-Cas9 can be used to target any sequence in the genome.

Wang offers this tip: “It's quite important, at every step of the process, that you are not losing library representation.” It’s also important that you infect enough target cells.

What’s “enough” depends on your experiment and method of selection. Shalem and Sanjana say they kept a high representation of library within cells and aimed for 300 cells per construct, but in some biological systems one “might need larger numbers.”