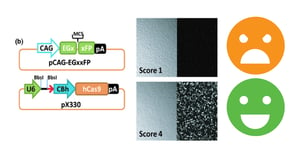 The use of CRISPR/Cas9 for gene editing has expanded since its adaptation for use in mammalian cells in 2012-2013. Researchers are now using this system in ever more creative ways, (Wang et al., 2013, Cho et al., 2014). There are several variants of the CRISPR/Cas9 system floating around, and many pre-designed plasmids containing these variants ready for purchase. But what is the easiest and fastest way to use the system in mice? We'll have a post that goes into the mouse genome editing process in a bit more detail in the coming weeks, but, in this post, we will outline a simple method for selecting the guide RNA, validating its efficacy in vitro, and using it in mouse embryos to generate gene modified mouse lines. Hopefully this post will help get your in vivo research up and running as soon as possible!

CRISPR/Cas9 is often used to study the biology surrounding a particular gene (although it has been quite successfully adapted for use in screening experiments as well). Therefore, if you’ve started down the CRISPR path, you’ve probably got a gene you’d like to manipulate in mind. Now it’s time to consider where you would like to attack this gene. Should you cut it at the beginning of the coding sequence to delete the entire gene? Perhaps you are more interested in the c-terminus and would like to target that region. Or you may even wish to generate a point mutation and need to focus your attention to that particular region. No matter where you are looking, you can either scan the genome yourself for potential gRNA sites, or you can utilise several online tools that do it for you. One such option is the CRISPR Design tool supplied by the Zhang lab. This simple website invites you to input the target region (approximately 500bp is best) and select the organism. It will then tell you the available gRNA targets in that region. The CRISPR Software Matchmaker can be used to determine the pros and cons of using many different types of gRNA design software.

When you are happy with your selection, ordering the sgRNA is simple and easy. Several companies supply gRNA sequences, such as GenScript, ThermoFisher Scientific and OriGene, or you can order them yourself through whatever DNA supply company you currently use. You can also find many previously validated gRNAs at Addgene.

In vitro screening for the best gRNA Not all gRNA’s are effective. At the time of writing many of the specifics surrounding why some gRNA’s work better than others remain unknown, but fret not! The key to saving time and energy during your in vivo work is to screen you gRNA in vitro first. In vitro screening is a simple and fast method for validating your selected gRNA’s, and has the bonus benefit of supplying you with primers for validating your edit in mice once they have been generated (more on that later).

To begin the in vitro screening process, you should first develop primers to the approximately 500 base pair sequence surrounding your gRNA. Once amplified, you can insert this region into a pCAG-EGXXFP plasmid using standard cloning techniques (The XX indicates where your target is inserted, disrupting the EGFP fluorescent signal, for details on this plasmid, see Mashiko et al., 2013). Testing the efficacy of your gRNAs is then a simple matter of transfecting HEK293T cells with your modified pCAG-EGXXFP plasmid along with the individual gRNAs in their PX330 plasmids (or similar plasmids for gRNA expression), one gRNA at a time. After 48 hours of incubation, you assess the level of fluorescence in your cells under a fluorescence microscope. The higher the amount of fluorescence, the better that gRNA is at causing a double stranded break at the target site, allowing the two halves of EGFP to recombine by homology directed repair, and resulting in the expression of EGFP. Using this technique, you can assess several sgRNA’s at the same time, and choose the most effective ones to increase your chances of gene modification in vivo.

Find Plasmids for Testing Your gRNAs in vitro at Addgene

Now that you’ve validated your gRNAs for use in mammalian cells, it’s time to use them in mouse embryos. When researchers first started using CRISPR/Cas9 for genome editing in mice, they would often microinject gRNAs along with RNAs encoding Cas9 into the oocyte. This original method was developed as the use of CRISPR/Cas9 in mammalian cells was being explored and it allowed control over each individual component of the system. However, it is easier to directly inject the pX330 plasmids used in the validation assay (above) and it is just as effective (Mashiko et al., 2014). The plasmid is sturdier than the delicate RNA and therefore there has less chance of contamination with RNase leading to degradation that can set you back days. Working with plasmid DNA is much easier and doesn’t require the extra precautions needed when dealing with RNA (e.g. face mask, and a dust free and specially cleaned work bench).

Once the pups are born

It takes roughly 19 days for the injected mouse embryos to develop. Once they are born, it’s time to screen them for your desired edit. Good news! Remember the primers you designed to generate your pCAG-EGXXFP plasmid? They are the perfect primer sets to use to genotype your pups. A simple PCR with these primers will let you know if there are any major deletions, and sequencing of the PCR products will give specific details on what exactly has been inserted or deleted.

Each lab will use a slightly different method to genotype their pups. Taking a toe, a finger, a tail tip, or a combination of these will allow you to determine which pup is which once the sequencing comes back. Alternatively, if you can afford to wait, you can hold off on genotyping until the pups are 2-4 weeks old and use the ear tag method (creating different patterns of ear holes and using that material for genotyping), but bear in mind that this method will require you to house mice that may have no mutation, costing money and space. As a rule, screen all of your pups unless you have an enormous litter (over 15 pups). In this case you should be able to find your mutant from screening as little as 8-10 pups. The level of fluorescence you saw in the validation assay should give an accurate indication of how many pups will contain a mutation and many of the mice with the mutation will be homozygous for it in every cell; however, if the microinjection was done as the pronuclei were fusing, you may have several mosaic mice. To figure out what alleles are present in these mice, you can clone the PCR products into a pBluescript cloning vector and sequence the resulting plasmid.

It can take roughly 3 months from the day you decide to do a gene modification experiment in mice to the day you have your F0 generation (barring life’s little accidents and stuff ups). This is a huge improvement on previous mouse work, which could take 8 months or more. With such a rapid acceleration in the production of mouse lines that could be used to study a wide variety of phenomena, it’s possible that we’ll learn much more from our favourite mammalian model organisms in the near future.

Samantha Young is a Medical Writer with a PhD in reproductive biology and genetics. She loves to communicate the latest and greatest in scientific content.