Retrograde AAV: Making the Journey from Axon to Nucleus

The concept that the brain has a structure is not obvious. While it’s been a long time since Aristotle argued the heart was the thought center of the body, it wasn’t until the 1700s that scientists hypothesized and began to gather evidence that the brain has distinct regions with specialized functions. Phineas Gage, the man whose personality changed drastically after an accident where an iron spike was driven through his head, is a famous early example of the link between brain regions and behavior.  Also around that time, French scientists Marc Dax and Paul Broca independently discovered the speech production center of the brain when autopsies of speech-impaired patients revealed lesions in a particular brain region, later named the Broca’s area. In this post I’ll describe a new virus with retrograde function and how it’s enabling scientists to access neurons in a powerful way. Keep reading to find out what retrograde function is and how it gives us better access and ultimately a better understanding of the brain.

So far scientists have identified 180 brain regions. Both this geography and the way the brain is connected to itself across these regions is important for understanding how the brain functions. The basis for these connections in the brain are (drum roll) neurons! Neurons are really cool because they can transmit information, for example, from one of the 180 regions to another or from the brain to the rest of the body. Therefore, by simply looking at how neurons are physically connected we can begin to understand how the brain works. It’s kind of like “the head bone’s connected to the neck bone,” but with a hundred billion neurons and a hundred trillion connections (synapses), so it’s too long to make into a song.

Since neurons are polar, their connections are directional, meaning information typically flows from the cell body (or soma, which contains the nucleus) to the axon terminal. When studying a particular brain region it’s important both to know what areas it signals to, and also what areas signal to it. To address this question, there are two methods of neuronal tracing (Fig. 1): one to visualize neurons that send information to a region (retrograde tracer, Fig. 1A), and another to visualize neurons that receive information from a region (anterograde tracer, Fig. 1B). Tracers are typically delivered to a particular location and they either trace downstream from the soma toward the axon (anterograde tracer) or upstream from the axon terminals to the soma (retrograde tracer) (Fig. 2).

Viruses are good tracers because they can be injected into the brain and efficiently deliver genetic information to specific cell types based on viral tropism. Viruses also have a major advantage over traditional tracers because in addition to delivering a visual marker, they can deliver genetic tools that can enable manipulation of these neurons. While some viruses (e.g., rabies) naturally exhibit retrograde transport and thus, can perform retrograde tracing, many of these viruses exhibit technical limitations such as toxicity, low expression, or poor scalability. Adeno associated virus (AAV) is a preferred virus for in vivo use because of its low immunogenicity and high transgene expression, however, most AAV serotypes exhibit relatively low retrograde transport efficiency.

Because efficient retrograde access to neurons is such a powerful technique, scientists at Janelia Research Campus and the University of California, Berkeley recently engineered an AAV variant that not only maintains an ability to efficiently infect neurons and direct high-level transgene expression, but which has retrograde functionality that can be used to monitor and map neurons (Tervo et al., 2016). So, if I think a certain brain region is important for hunger, I can inject it with retrograde AAV to see what neurons and what regions connect to it. Then I can see if stimulating those specific neurons causes an increase in feeding. Manipulating specific neurons has traditionally been challenging because of how physically intermingled neurons are in the brain. With retrograde AAV, scientists can functionally dissect specific neurons within their natural environment, all while reciting their favorite slogan, “look how cool the brain is!"

Retrograde AAV can be used to interrogate specific neuronal populations

One major advantage of retrograde AAV over traditional tracers is its ability to deliver a wide array of genetic tools for neural interrogation like optogenetic tools, chemogenetic tools, calcium sensors, and many others. Thus, not only can one map what regions are signaling to a particular site, but in the same animal one could then activate, inhibit, detect neuronal signaling, or perform any other genetically controlled function. 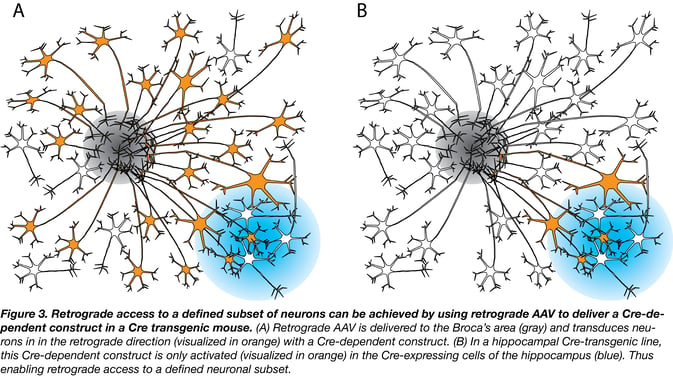 Retrograde AAV opens a lot of doors in neuroscience by enabling mapping and interrogation of neural networks in a new and specific way. This new serotype also has promising therapeutic applications; it can enhance therapeutic delivery across broader physical areas of the brain and enable access to neurons that are physically blocked, such as those in the spinal cord.

While there are several hypotheses, the mechanism of retrograde transport is still unclear and remains to be discovered. In the meantime, retrograde AAV is likely to have a big impact on neuroscience and enables scientists to interrogate the brain in new and exciting ways.

Checkout Addgene’s collection of retrograde AAVs that can used to deliver a variety of genetic tools.