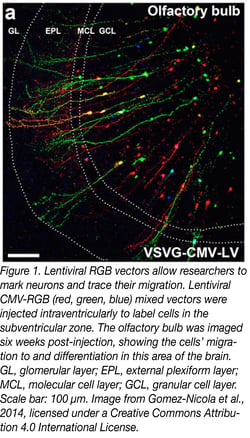 In the early 1990s, researchers developed viral vector systems based on retroviruses like Moloney murine leukemia virus (MMLV). The vectors could integrate into the genome, permitting long-term transgene expression, but they could only infect actively dividing cells. Another type of vector, based on adenovirus, could infect non-dividing cells, but without sustained transgene expression. To design a viral vector system that could do both, Addgene depositor Didier Trono and collaborators turned to the lentivirus HIV-1, well-known to infect non-dividing cells.

The first lentiviral vector system consisted of three plasmids: the packaging, envelope, and transfer plasmids. The packaging plasmid carried a mutated HIV-1 provirus that couldn’t package itself due to a few missing proteins. The envelope plasmid contained a viral envelope to dictate the tropism, or types of cells the vector could infect. Finally, the transfer plasmid encoded the desired transgene flanked by HIV-1 long terminal repeats (LTRs) that facilitate viral packaging and host genome integration. After co-transfection of these plasmids, 293T cells released transgene-containing lentiviral particles into the media, which could be collected for experimental use. In 1996, Naldini et al. transduced rat neurons in vivo with beta-gal and other reporters, and they showed that expression persisted for at least thirty days. Although adeno-associated viral vectors can also target non-dividing cells, lentiviral vectors can carry much more genetic cargo (8 kb vs 4.5 kb), and they remain popular for targeting and tracing cells in the brain (Figure 1).

The graphic below shows how the lentiviral genome was condensed to create the 2nd-generation lentiviral system (Figure 2). The HIV genes that do remain are very important for viral production: Gag (structural precursor protein), Pol (polymerase), Tat (viral transactivator for transcriptional activation from the 5’ LTR) and Rev (facilitates nuclear export of transcripts). A different viral envelope protein (Env), usually from VSV-G due to wide infectivity, is often used as a substitute for HIV-1 Env, which can only infect CD4+ cells. 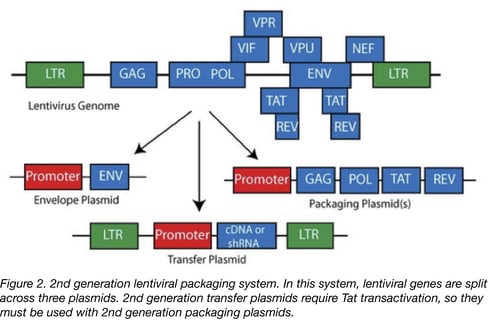 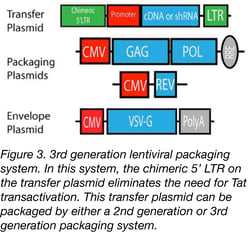 Although the 2nd generation system is safer than the original system, the possibility of creating a replication-competent virus via recombination between the transfer and packaging plasmids does exist. To further reduce this possibility and enhance biosafety, Dull et al. created the 3rd generation system (Figure 3), which differs from the 2nd generation in two key ways. First, the packaging system is split into two plasmids: one encoding Rev and one encoding Gag and Pol, increasing the number of recombination events necessary to create a replication-competent virus. Second, Tat is eliminated through the addition of a chimeric 5’ LTR containing a Tat-independent promoter. Although safer, this system may be more cumbersome to use and lead to lower viral titers due to higher plasmid number. For more information on the key differences between the 2nd and 3rd generation packaging systems, see our Lentiviral Plasmid FAQs.

Lentiviral vectors in the lab

Lentiviral vectors are incredibly popular in the lab - the Trono lab’s lentiviral packaging and envelope plasmids are two of Addgene’s most requested plasmids! Lentiviral particles with the VSV-G envelope have high infectivity in a wide range of cell types, so they’re ideal for work with primary cells or other difficult-to-transfect cells. Lentiviral barcoding libraries have been used for complex applications like lineage tracing in heterogeneous tumors.

Lentiviral vectors are also commonly used to make stable transgene-expressing or knockout cell lines. Many CRISPR plasmids are designed for lentiviral use, including Addgene’s top requested plasmid in 2015: lentiCRISPR v2, used both for targeted modification and genome-wide screening.

Lentiviral vectors in the clinic

Since lentiviral vectors can deliver a large amount of DNA (~8 kb) with a relatively low immune response, it should come as no surprise that researchers are interested in developing these vectors for gene therapy. In 2003, VIRxSYS began the first clinical trial with a lentiviral vector. CD4+ T-cells from patients with HIV-1 were transduced with a lentiviral vector containing an antisense sequence against the HIV-1 envelope. As of 2013, 65 patients had been treated with this therapy, which lowered viral load and did not cause severe adverse reactions. Clinical benefits of lentiviral vectors have been observed in small trials for other diseases, including the common hematopoietic disorders sickle cell anemia and beta-thalassemia. Lentiviral vectors are promising agents for cancer immunotherapy, but this research is still in the pre-clinical/early clinical stages.

Lentiviral vector technology has come a long way since the 1990s, both in terms of research impact and safety. Many of Addgene’s most requested plasmids are used with lentiviral expression systems. If you’re new to the world of lentivirus, check out our lentiviral plasmid and biosafety guides before beginning your experiment. Let us know how you use lentivirus in the comments section below!