There are over 75,000 pathogenic genetic variants that have been identified in humans and catalogued in the ClinVar database. Previously developed genome editing methods using nucleases and base editors have the potential to correct only a minority of those variants in most cell types. A new technique from David Liu’s lab at the Broad Institute could add more precision and flexibility to the CRISPR editing world.

This new approach, published in Nature earlier this week, is called prime editing. It’s a “search-and-replace” genome editing technique that mediates targeted insertions, deletions, and all possible base-to-base conversions. And, it can combine different types of edits with one another. All of this is possible without double strand breaks (DSBs) or donor DNA templates. How does this work? First, an engineered prime editing guide RNA (pegRNA) that both specifies the target site and contains the desired edit(s) engages the prime editor protein. This primer editor protein consists of a Cas9 nickase fused to a reverse transcriptase. The Cas9 nickase part of the protein is guided to the DNA target site by the pegRNA. After nicking by Cas9, the reverse transcriptase domain uses the pegRNA to template reverse transcription of the desired edit, directly polymerizing DNA onto the nicked target DNA strand. The edited DNA strand replaces the original DNA strand, creating a heteroduplex containing one edited strand and one unedited strand. Lastly, the editor guides resolution of the heteroduplex to favor copying the edit onto the unedited strand, completing the process.

The prime editor: A fusion between Cas9 and reverse transcriptase

To decrease the components prime editing would introduce into the cell, the team fused the M-MLV reverse transcriptase (RT) with the Cas9 H840A nickase to create the prime editor (PE). They found that orientation matters: fusing the RT to the C-terminus of the Cas9 nickase resulted in higher editing efficiency. They called this complex PE1.

Building upon prior reverse transcriptase research, (Baranauskas et al., 2012; Arezi and Hogrefe, 2009), the Liu lab created and evaluated 19 PE1 variants with RT mutations known to increase activity, enhance binding between the template and primer binding site, increase processivity, or improve thermostability. What came out on top? The Cas9 nickase fused to a pentamutant of M-MLV RT. They called this system PE2, which had prime editing efficiencies on average 2.3- to 5.1-fold (though up to 45-fold) higher across different genomic sites compared to PE1.

The pegRNA: A template and guide all in one

The other important component of prime editing is the prime editing guide RNA (pegRNA). The pegRNA is a guide RNA that also encodes the RT template, which includes the desired edit and homology to the genomic DNA locus. Sequence complementary to the nicked genomic DNA strand serves as a primer binding site (PBS). This PBS sequence hybridizes to the target site and serves as the point of initiation for reverse transcription. 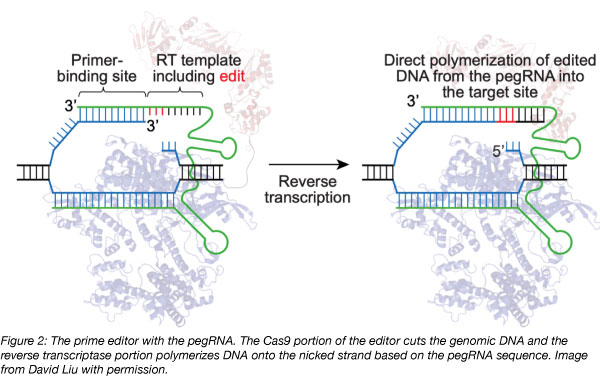 For designing pegRNAs, the Liu lab created PrimerDesign, a prime editing design tool, with the Pinello lab and the Joung lab.

Once the prime editor incorporates the edit into one strand, there’s a mismatch between the original sequence on one strand and the edited sequence on the other strand. To guide heteroduplex resolution to favor the edit, the Liu lab turned to a strategy they previously used when they developed base editing (Komor, et al, 2016). By nicking the non-edited strand, they can cause the cell to remake that strand using the edited strand as the template.

A third prime editing system called PE3 does just this by including an additional sgRNA. Using this sgRNA, the prime editor nicks the unedited strand away from the initial nick site (to avoid creating a double strand break), increasing editing efficiencies 2-3 fold with indel frequencies between 1-10%.

Note: PE2, PE3, and PE3b all use PE2 (pCMV-PE2). PE3 and PE3b add an sgRNA, which can be any guide RNA expression vector or cassette

The prime editor extends the reach of CRISPR genome editing as it can edit near or far from PAM sites making it less constrained by PAM availability like other methods. The PAM-to-edit distance can be over 30 base pairs for prime editing. Since PAM sites occur every ~8 base pairs on either DNA strand, many previously developed base editors (Table 1 from Rees and Liu, 2019) with a <8 base pair editing window cannot edit within what Fyodor Urnov refers to as “PAM deserts” in the genome.

More versatile and precise than base editing (in certain circumstances)

Base editors developed thus far can only create a subset of changes (C->T, G->A, A->G, and T->C). Prime editing allows for all 12 possible base-to-base changes.

Prime editing is also more precise. Base editors, for example, will edit all the C’s or A’s within the base editing window, while prime editors make a specific edit defined by the pegRNA. In cases when bystander editing is unacceptable, prime editors can be used to avoid this possibility.

Homology directed repair (HDR) stimulated by double strand breaks has been widely used to generate precise changes. However, the efficiency of Cas9 cleavage is relatively high while the efficiency of HDR is relatively low, meaning that most Cas9-induced DSBs are repaired by non-homologous end joining. As a result, Cas9 treatment causes most products to be indels while the efficiency of HDR is typically less than 10%. In contrast, prime editing can offer ~20-50% efficiency in HEK293T cells with 1-10% indels. In other tested cell types, including post-mitotic primary mouse cortical neurons, the authors report lower prime editing efficiencies, but still see much higher ratios of desired edits to indel byproducts than Cas9-initiated HDR.

What’s next for prime editing?

While prime editing is an exciting step towards more versatile genome editing, it’s new at this point and warrants many additional studies. In their paper, the Liu lab points out the need to investigate off-target prime editing in a genome-wide manner, identify any inadvertent effects the prime editors may have on the cells, and assess in vitro and in vivo delivery strategies. It’s exciting to see the amount of discussion on Twitter about prime editing (here, here, and here) and we look forward to seeing what comes next for prime editing.