Nanoblades are engineered murine leukemia virus (MLV)-like particles loaded with Cas9-gRNA ribonucleoproteins (RNPs). According to the authors, they named their tool Nanoblades because they think of these particles as tiny DNA cutting ninjas that deliver CRISPR to multiple types of targets: primary cells, embryos, and animals. Nanoblades can also carry different types of CRISPR cargo including RNPs for indel formation via NHEJ, precise modification with Homology Directed Repair (HDR), CRISPR activation or repression, transgenic mouse line creation, and in vivo gene editing of mice, with the potential to be used for other types of CRISPR applications. Let’s take a look at the key components of Nanoblades, how their editing efficiency and off-target effects compare to existing technologies, and their use for HDR editing and mouse-model generation.

Nanoblades are a Cas9 RNP delivery vehicle that’s based on mouse leukemia virus (MLV) virus-like particles (VLPs). VLPs lack viral genomes which means they are non-infectious and non-replicative. Nanoblades are produced by transfecting the following four components into 293T cells. 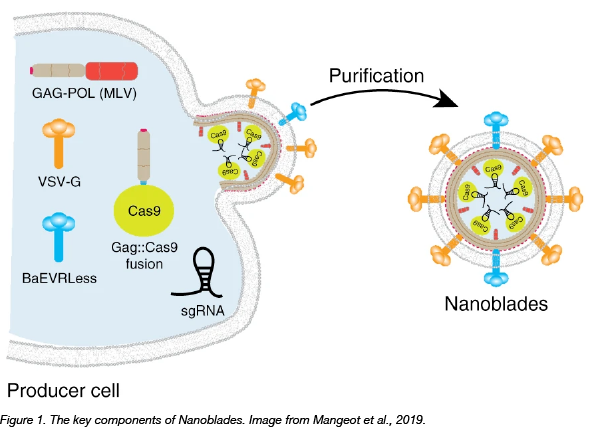 Nanoblades are formed when viral structural proteins, such as the MLV protein Gag, multimerize and spontaneously assemble into particles at the cell membrane. Mature Nanoblades then bud into the cell culture supernatant and can be purified by centrifugation.

The MLV Gag protein fused to a Flag-tagged SpCas9 is incorporated into Nanoblades, just like the unmodified MLV Gag protein. After Gag-Cas9 is incorporated, the MLV protease, supplied as part of the MLV Gag-Pol polyprotein, cleaves the proteolytic site connecting the two proteins, thus releasing Cas9. Nanoblades can also deliver Cas9 variants, such as a transcriptional activator dCas9-VPR, if these variants are fused to the MLV Gag in place of SpCas9.

A gRNA targeting a DNA sequence of interest is expressed in 293T cells and loaded into Nanoblades by association with the the Cas9 portion of the Gag-Cas9 fusion protein. A single Nanoblade particle can be loaded with 1-4 different gRNAs.

To alter the cell tropism of Nanoblades, different viral envelope protein(s) are expressed to pseudotype Nanoblades. The team found that Nanoblades pseudotyped with a mix of VSV-G and the baboon endogenous retrovirus Rless glycoprotein (BaEVRless) had high rates of transduction for most cell types they tested.

Interested in using Nanoblades? Plasmids are available from Addgene.

When compared head-to-head with existing CRISPR delivery technologies, Nanoblades had higher rates for editing efficiency and lower rates of off-target effects. Nanoblades generated up to 76% editing efficiency in mouse BM cells when using a gRNA targeting the Fto gene, while editing was not detected in cells electroporated with RNPs using the same guide. Nanoblades also had lower off-target effects when compared to DNA transfection of gRNA and Cas9 expression plasmids. These results are in line with previous research showing that the method of Cas9 and gRNA delivery can influence the level of off-target effects, with electroporation of RNPs generally having lower off-target edits compared to DNA transfection.

CRISPR-based HDR allows for the precise insertion of a DNA sequence ranging from a single nucleotide change to large insertions like the addition of a fluorophore or tag. To utilize HDR, a donor template containing the desired sequence flank by homology arms must be delivered to cells along with the gRNA and Cas9. An “all-in-one” Nanoblades which carries a gRNA, Cas9, and a HDR donor template DNA can be generated by incubating Nanoblade particles with polybrene, a cationic polymer. Polybrene has long been used to increase retroviral transduction efficiency by neutralizing the charge repulsion between virions and the cell surface, and also helps form DNA and retroviral-particle or VLPs complexes. The team found that "all-in-one" Nanoblades facilitated HDR with either a ssDNA or dsDNA donor template.

In vivo editing of mouse zygotes and mice with Nanoblades

CRISPR has also been extensively used to create transgenic mice by microinjecting zygotes with CRISPR components. However, this sometimes requires intracellular injections into the cytoplasm or pronucleus of the zygote which is both technically challenging and can negatively impact zygote viability. Nanoblades, however, avoid this pitfall since they are injected into the space surrounding the zygote, where they can then fuse with the target cell membrane, and transfer their CRISPR cargo into the zygote. As a proof-of-principle, the team used Nanoblades to disrupt the tyrosinase (Tyr) gene in mouse zygotes, which results in albinism in mice. Of the eight mice born from Tyr Nanoblade treated zygotes, five had detectable Tyr editing at the phenotypic and genotypic levels. The editing efficiencies of the chimeric and fully albino mice ranging from 11% to 100%, a level similar to other approaches.

Nanoblades can also be used to non-invasively gene edit the liver of adult mice. When mice were IV injected with Nanoblades targeting the hydroxyphenylpyruvate dioxygenase (HPD) gene, all nine treated mice had ~10% editing in their livers, while non-injected and control gRNA injected mice had no detectable editing. Additionally, off-target spleen editing was not detected and Nanoblade injection did not induce morbidity. Together these results demonstrate that Nanoblades are a potential alternative method for generating transgenic mice strains and for non-invasive in vivo gene editing.

The bottom line on Nanoblades

Nanoblades are tiny DNA-cutting ninjas which can stealthily delivery many types of CRISPR editing cargo to difficult to target cells. When compared to existing Cas9 delivery methods, Nanoblades have just as good if not better on-target editing efficiencies and have lower off-target edits. Another great thing about Nanoblades? They’re easily produced in a BSL2 lab, making them a versatile and accessible genome editing tool.