Since the discovery of GFP over 50 years ago, the growing spectrum of fluorescent proteins (FPs) has been an invaluable resource for studying the organization and function of cellular systems. FPs have been used to track protein localization, cell structure, intracellular trafficking, and protein turnover rates. Additionally, by engineering FP fusions associated with cellular organelles, scientists have been able to study many cellular processes, including mitosis, mitochondrial fission/fusion, nuclear import, and neuronal trafficking. Although FPs have enabled discovery of many cellular mechanisms, there are some limitations to working with FPs. Overexpression of fluorescently tagged proteins can lead to improper protein localization, protein aggregation, or disruption of normal protein function, and ultimately misinterpretation of the protein’s cellular role.

One way to avoid the pitfalls of overexpressed fluorescent protein fusions is to replace the genomic copy of your gene of interest with a fluorescent protein fusion. CRISPR genome editing can help accomplish this goal. The power of this system lies in the ability of the endonuclease Cas9 to create a DNA double stranded break (DSB) at a genomic site specified by a guide RNA (gRNA) sequence. Users can design gRNAs to induce the break at a specific genomic site and, using the endogenous homology directed repair pathway, a new user-defined DNA sequence (like GFP) can be inserted at the DSB. CRISPR has allowed scientists to tag and light up endogenous genes of interest to better understand normal protein function. However, CRISPR protein tagging does have its limitations, especially when trying to perform high-throughput experiments. If a user wants to carry out a high-throughput genetic screen, it is expensive and time consuming to individually generate gRNAs and homology arm repair templates containing the tag for each insertion. Also, it remains challenging to screen for the genetically modified strains that contain your newly tagged gene. Most insertions can only be detected by labor-intensive processes like PCR or by evaluating visual phenotypes.

The Jorgensen Lab recently developed a modular plasmid assembly toolkit called SapTrap to improve CRISPR genomic tagging in C. elegans. SapTrap offers scientists a convenient one tube assembly reaction to generate high-throughput targeting vectors. These vectors can be used to tag endogenous genes and simultaneously introduce a selection marker for screening modified strains. With SapTrap, the user first designs either oligos or synthetic DNA for the desired gRNA target sequence, as well as the 5’ and 3’ homology arm repair template (Fig. 1, Step 1). There is no need for PCR or cloning, as digestion of the destination vector with SapI yields 2 sites- the first site accepts the sgRNA target sequence for U6 promoter expression and the second site accepts the homology arm repair template. 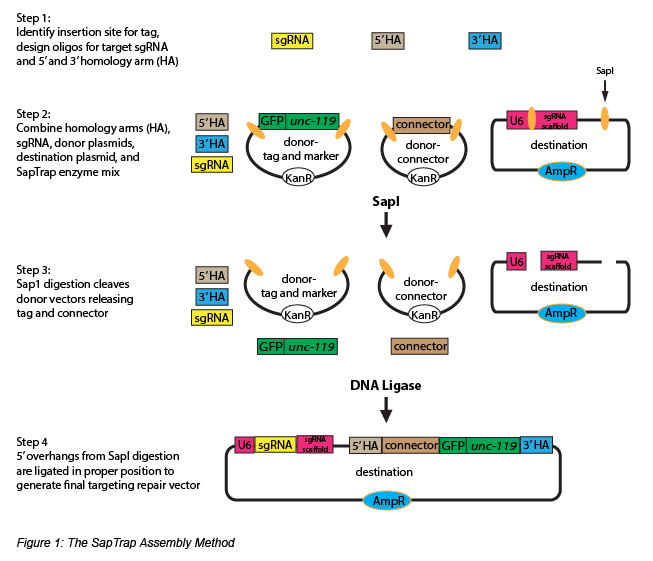 SapTrap includes a prebuilt donor plasmid library containing several types of fluorescent (EGFP, tagRFP, mCherry) and nonfluorescent (Halo, SNAP) tags, a selectable marker (floxed Cbr-unc-119) for easy screening of the insertion event, and a variety of connector modules (linker sequences between the tag and homology arms). Digestion of the donor plasmids with SapI allows the tag, selectable marker, and connector to be released (Fig. 1, Step 2-3). Since donor plasmids of the same type will produce the same unique SapI 5’ overhang, different combinations of connector and tag donor plasmids from the library can be used to generate functionally unique repair templates. A final ligation reaction correctly assembles the final targeting vector (Fig. 1, Step 4), and co-injection of the targeting vector and a Cas9 expression plasmid will insert the desired genetic tag and marker sequence into the targeted loci. The selectable marker can be removed by Cre-mediated excision for scarless tag insertion.

In addition to the obvious advantages SapTrap offers for tagging a single genetic locus, the toolkit also offers repair templates for tagging proteins in a tissue specific manner, as well as 3-site destination vectors for inserting a tag at multiple target sites. SapTrap vectors can be easily modified to tag hundreds of genes, generating powerful genetic screening libraries.

For those who do not work with C. elegans, several groups have designed modular toolkits to assist with tagging genomic loci in other model systems, including mammalian cells.

Beyond simply monitoring protein localization and activity, CRISPR tagging systems can be modified to assay additional protein characteristics. For example, Masato Kanemaki's lab has developed a CRISPR/Cas-based system for tagging endogenous proteins with an auxin-inducible degron (AID) tag to generate proteins which can be rapidly and reversibly degraded after the addition of auxin to the culture medium. Any number of regulatory sequences, including protein enhancers and repressors, can be included in the repair template for inducible alteration of protein expression levels.