This post was contributed by Jacob Lazarus, a postdoctoral researcher at Harvard.

These methods roughly fall into two categories: those that rely on exogenous enzymes and those that use endogenous homologous recombination.

Developed over the past 20 years, Lambda Red recombineering, which uses enzymes domesticated from the Lambda bacteriophage, is arguably the most widely and productively used  (Thomason et al., 2014). In recent years, CRISPR-Cas9 technology has also aided in the creation of scarless mutations, both in stand-alone systems (Jiang et al., 2013), and those which increase the efficiency of Lambda red (Pyne et al., 2015; Reisch and Prather, 2015).

Both of these systems are powerful, but they rely on exogenous enzymes, require multiple transformation and plasmid curing steps, and can generate off-target mutations.

As an alternative, endogenous homologous recombination enzymes can also accomplish the desired genomic modification. This technique is frequently called allelic exchange. Here, a mutated allele introduced from a conjugative plasmid replaces the chromosomal copy. This is a versatile technique, and is less prone to off-target mutations. Ultimately, successful allelic exchange requires two sequential homologous recombination events, but because these events are rare, each requires selection.

These two steps are (Figure 1):

What are the counter-selectable markers used to identify double crossovers? The most commonly used counter-selection system relies on the sacB gene product of B. subtilis (Hmelo et al., 2015). The sacB gene product is a sucrase that converts sucrose into a toxic metabolite. Cells that have undergone a double crossover will not contain sacB, allowing them to grow on sucrose. Cells that have only gone through the single cross over still contain sacB and will not grow on sucrose.

One popular counterselection vector is the pDS132 sacB-based allelic exchange vector. This vector contains sacB, an chloramphenicol resistance cassette, and the R6K origin of replication to allow replication only in hosts carrying the bacteriophage lambda pir protein. This allows conjugation between a pir-containing donor and the recipient of interest. Because pDS132 cannot be replicated in the recipient, the only antibiotic resistant colonies isolated are those where the allelic exchange vector has undergone single crossover and integrated into the genome. Subsequent selection on sucrose will identify double crossovers.

This can be an efficient method to generate precise, unmarked mutants, but it frequently requires considerable optimization to ensure strong counter-selection. Anecdotally, there is also a large amount of user-to-user variability, and in some cases, counter-selection escape can occur: single crossover colonies can acquire the ability to grow on sucrose, perhaps by sacB inactivation.

In 2015, the Chen lab harnessed a group of bacterial toxins to facilitate efficient recombineering (Khetrapal et al., 2015). They created vectors for Lambda Red that contained one of eight bacterial toxin genes isolated from E. coli or Psuedomonas aeruginosa. These toxins were a mix of Type VI secreted effector toxins, toxin-antitoxin type toxins, and phage holins. They hypothesized that genes that had evolved specifically for toxicity would allow stronger counter-selection than one merely co-opted toward that aim (i.e. sacB).

Importantly, to prevent activation of toxins before the second crossover step, they tested their expression under both rhamnose- and arabinose-inducible promoters. Tight control of toxin expression is absolutely necessary, because leaky expression of toxin could select for mutations in the toxin itself (leading to counter-selection escape). The rhamnose induction system is well-characterized and quite tight (Giacalone et al., 2006). The Chen lab demonstrated excellent counter-selection which enabled very efficient recombineering.

We were inspired by this work and sought to develop these negative selection markers for allelic exchange.

To do this, we performed the following modifications to pDS132 (Philippe et al., 2004): 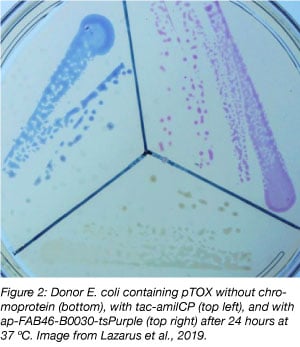 We validated these vectors, which we call “pTOX” in a broad group of Gram-negative Enterobacteriaceae including in E. coli O157:H7, Shigella flexneri, Enterobacter cloacae, and Serratia marcescens and have created dozens of deletions as well as insertions with this system (Lazarus et al., 2019).

Additionally, to facilitate modification of strains where conjugation may be difficult, we have also included versions of pTOX that encode one of two visible blue or magenta chromoproteins (Figure 2) (Liljeruhm et al., 2018). This system is a nice confirmation of successful single crossover – after about 48 hours, the resulting colonies turn subtly blue or magenta. This is particularly valuable when first optimizing conjugation in strains that don’t conjugate that well. This is because in these circumstances, the conjugation can be so inefficient, that instead of the resulting colonies being true single crossovers, they are just spontaneous antibiotic resistant clones. But if they are blue or magenta, they are real!

Allelic exchange is a great technique for the scarless modification of bacterial genomes. It can accomplish large deletions, insertions, and even precise point mutations. I think it will always have a place in every bacterial geneticist’s toolbox.

Depending on the growth rate of the organism of interest, from the day primers arrive, the desired chromosomal modification can be made in 5 days.

Counter-selection with sacB has revolutionized allelic exchange. Even now, only half our lab has switched over to pTOX. However, we feel it has clear advantages, and are hopeful that continued development of allelic exchange vectors will produce an array of great options, and continue to improve the efficiency of this versatile technique.

Many thanks to our guest blogger Jacob Lazarus from Harvard.

Jake received his MD and a PhD in Cell and Molecular Biology from the University of Pennsylvania, and trained in adult medicine and clinical infectious diseases at the Massachusetts General Hospital where he is now an attending physician. He performs post-doctoral research in the lab of Matthew Waldor at Harvard. Now that he has an efficient allelic exchange system, he is so excited to use it to explore how hospital-associated Gram-negative bacteria become resistant to antibiotics!