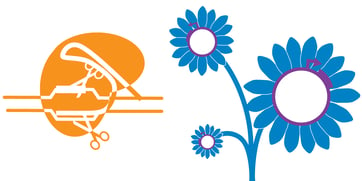 CRISPR has taken the genome engineering world by storm owing to its ease of use and utility in a wide variety of organisms.  While much of current CRISPR research focuses on its potential applications for human medicine (1), the potential of CRISPR for genome engineering in plants is also being realized. There are a variety of reasons to consider using genome editing to change the genetic code of plants, including the development of crops with longer shelf life and the development of disease-resistant crops to increase agricultural yield (2,3). While it is certainly possible to select for desirable traits using traditional plant breeding approaches, these techniques are cumbersome, often requiring several rounds of selection to isolate plants with the phenotype of interest. Genome engineering, on the other hand, allows for targeted modification of known or suspected genes that regulate a desired phenotype.  In fact, CRISPR has already been used to engineer the genome of many plant species, including commonly used model organisms like Arabidopsis and Medicago truncatula and several crop species including potato, corn, tomato, wheat, mushroom, and rice (4). Despite the almost universal functionality of the CRISPR system in most organisms, some plant-specific changes to CRISPR components are necessary to enable genome editing in plant cells.

CRISPR can be used to knockout, activate or repress target genes in plants using the same general experimental design principles developed in other model organisms (see our CRISPR guide for common CRISPR principles), however, plant-specific modifications to commonly used CRISPR plasmids are necessary to use the CRISPR system in plant cells. Like other model systems, expression of S. pyogenes Cas9 or Cas9 variants (hereafter referred to as Cas9) and a single stranded guide RNA (gRNA) is sufficient to modify the genome of plant cells. The structure of the gRNA (composed of a ~20 nucleotide targeting sequence and ~75 nucleotide scaffold sequence) is consistent between plants and other organisms, but the promoter used to drive gRNA expression is dependent upon the cell type in question.  In plant cells, gRNA expression is achieved by placing the gRNA downstream of a plant-specific RNA pol III promoter, such as AtU6, TaU6, OsU6 or OsU3, which are commonly used to drive expression of small RNAs in their respective species.  Addgene carries >30 “empty gRNA” backbones which contain a plant pol III promoter and gRNA scaffold sequence and allow researchers to insert targeting oligos with minimal cloning required.  As with other model systems, multiple gRNAs can be expressed to modify several genomic loci at once (more information on multiplex CRISPR can be found in this blog post).

Cas9 is commonly tagged with a nuclear localization sequence to enhance targeting to the nucleus, and several codon optimized Cas9 variants have been created in an effort to increase translation in a particular plant species or cell type5. Nuclease dead Cas9 (dCas9) based activators (such as dCas9-VP64) or repressors (dCas9-KRAB or dCas9-SRDX) can also be used to activate or repress target genes in plant cells, respectively. Cas9 expression is commonly driven by plant-derived RNA pol II promoters which regulate expression of longer RNAs (such as mRNAs for gene expression). Examples of commonly used RNA pol II promoters for Cas9 expression include the ubiquitously expressing cauliflower mosaic virus 35S promoter (CaMV 35S) or ubiquitin promoters (5). Addgene carries Cas9-containing plasmids for knockout, activation and repression of target genes in plants and many of the aforementioned empty gRNA backbones also contain Cas9, which enables expression of both Cas9 and the gRNA off of the same plasmid. 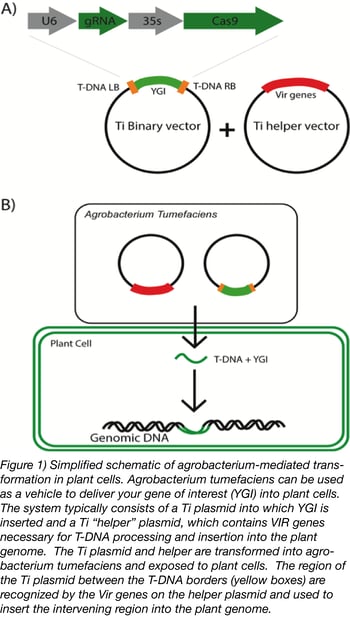 Once you have selected the correct CRISPR components for your application, it is time to deliver these components to your target cells.  Remember, efficient delivery of CRISPR components is essential for any CRISPR experiment, and failure to express either the gRNA or Cas9 in your cell line will result in a failed experiment.  CRISPR components can be expressed stably or transiently depending on the delivery method and cell type in question.  CRISPR components can be delivered and expressed transiently using a standard detergent, Polyethylene Glycol (PEG), although the application of this approach is limited to protoplast cells (plant cells whose cell wall has been removed).  Another common delivery method is agrobacterium-mediated delivery, which uses the soil derived bacterium Agrobacterium tumefaciens as a vehicle to deliver your gene of interest into a target cell line or organism (Presented in figure 1).  More information on Agrobacterium-mediated transformation can be found in this blog post. The pDGE Dicot Genome Editing Kit from the Stuttmann lab contains a variety of Agrobacterium-compatible, Cas9 containing vectors ready for Golden Gate mediated cloning of your gRNA of interest.

While different in many of the specifics - promoters used, precise protein sequences or domains, and methods of delivery - the underlying technique of CRISPR mediated genome engineering in plants isn’t all that different from how it’s used in other systems. Luckily, you don’t have to look far for plasmids that have the plant-specific modifications required for targeting your favorite plant gene; you can find many plasmids for a wide variety of CRISPR applications in plants available through Addgene. In addition to the plasmids described above, Addgene carries several useful CRISPR toolkits for creating plant expression plasmids, including plant CRISPR plasmids from the Yiping Qi lab and the MoClo Plant Parts Kit from the Patron Lab.  As with all plasmids in the repository, we highly recommend reading the associated publications or protocols to get the most out of the plasmid you chose for your experiment, but, if you’re working with plants, don’t be afraid to try your hand at CRISPR.