This post was contributed by Kutubuddin Molla, a Fulbright Visiting Scholar at the Pennsylvania State University.

Imagine you are dealing with a defective gene, Xm, the sequence of which is identical to the correct gene, Xw, except for a single base. If you heard about CRISPR, one question probably comes to mind: can CRISPR be applied to fix the defective base precisely?

Until 2016, precise single base changes were only possible through exploiting the homology-directed repair (HDR) pathway which occurs in cells at low frequencies and relies on the efficient delivery of donor DNA to facilitate repair. Since the development of CRISPR-mediated base editing (BE), these types of repairs can now be done more efficiently than before. A base editor precisely changes a single base with an efficiency typically ranging from 25-75%, while the success of precise change via HDR limited to 0-5%. This blog post covers a brief review of different basic BE technologies and their adaptation for plant genome editing.

Precise and efficient base rewriting in the genome became achievable in 2016 when two independent groups (Komor et al., 2016 and Nishida et al., 2016) invented CRISPR-base editors by tethering cytosine deaminase with Cas9 nickase (nCas9). nCas9 creates a nick in the DNA by cutting only a single strand, dramatically reducing the likelihood of detrimental indel formation. After binding with DNA, the CBE deaminates a target cytosine (C) into a uracil (U) base. Later the resultant U-G pair is either repaired by cellular mismatch repair machinery making an original C-G pair converted to T-A or reverted to the original C-G by base excision repair mediated by uracil glycosylase (Figure 1). The presence of a uracil glycosylase inhibitor (UGI) minimizes the second outcome and increases the generation of the desired T-A base pair.

What if you have another gene Y, which has a defective allele Ym and you need to convert an adenine (A) to a guanine (G)? You may wonder if a CRISPR-base editor can perform this change. However, there are no naturally known 'DNA adenosine deaminases' which would theoretically give rise to an adenine base editor.

A massive protein engineering effort by Gaudelli et al. resulted in the successful evolution of an adenosine deaminase that can act on DNA for adenine base editing. They first created a defective chloramphenicol resistance gene (CamR) by introducing a point mutation (H193Y). The reversion of this mutation by an adenine base editor would restore antibiotic resistance. To find such a protein, they created a mutant library of E. coli tRNA adenosine deaminases (ecTadA), fused it with dCas9, and transformed it into E. coli harboring the defective CamR gene. Screening for surviving colonies and subsequent rounds of evolution and engineering gave rise to a mutant TadA (TadA*) that satisfactorily accepts DNA as its substrate (see figure 2).

The artificially evolved adenosine deaminase catalyzes the conversion of a target ‘A’ to ‘I’ (inosine), which is treated as ‘G’ by cellular polymerases. Subsequently, an original genomic A-T base pair is converted to a G-C pair (Figure 1). As the cellular inosine excision repair is not as active as uracil excision, ABE does not require any additional inhibitor protein like UGI in CBE.

Base editors for the plant genome 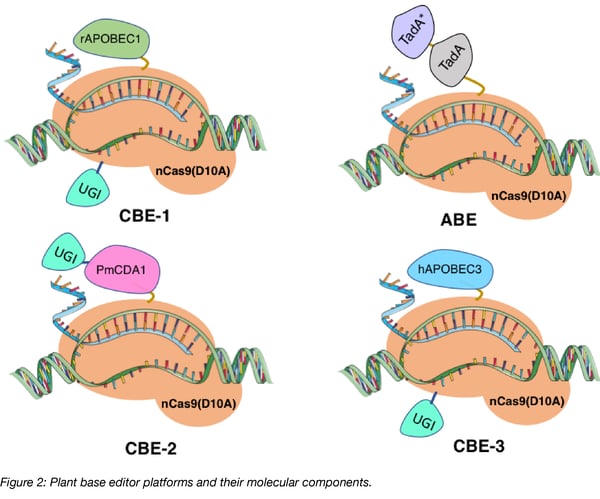 Adenine base editors for plant

We developed plant adenine base editor (ABE) vectors to install A>G or T>C mutations in the plant genome. We constructed three versions of the vector (pKABE6.3, pKABE7.9, and pKABE7.10) so that the user can optimize base editing efficiency based on the location of the ‘A’ relative to the protospacer adjacent motif (PAM). ABE7.10 can edit target 'A' if it lies in a small genomic window: at protospacer position 4-8 counting the ‘NGG’ PAM as 21-23 (Figure 3). If the target ‘A’ is closer to the PAM, i.e., positioned at 8-10 in protospacer, ABE6.3 or ABE7.9 are better suited (Gaudelli et al., 2017). Our vectors have two Bsa1 sites to clone the single guide RNA (protospacer+scaffold) in a pol-III (OsU3) promoter driven expression system. We use a single polycistronic tRNA-gRNA (PTG) gene system to clone multiple protospacers which enables us to target more than one genomic site simultaneously.

Cytosine base editors for plant

And if the target cytosine is closer to the PAM site? CBE developed using the hAPOBEC3 deaminase can edit in a stretched window ranging from 1-17 bp relative to the PAM sequence (Zong et al., 2018) (see CBE-3 in Figure 3).

All of the base editors mentioned above are SpCas9 nickase-based and depend on the presence of an ‘NGG’ PAM at a suitable distance from the base (C/A) to be edited. But does this mean a target C or A much further from the ‘NGG’ PAM cannot be editable? They can, but they require other base editor platforms. Hua et al. constructed a number of plant base editors replacing the SpCas9 with the mutant versions of SpCas9 and SaCas9, which recognize PAM sequences other than NGG (Table-1).

Tips for designing base editing experiments in plants

Kutubuddin Molla is an Ag-biotechnologist in the National Rice Research Institute, Cuttack, Odisha, India. Currently Kutubuddin is a Fulbright Visiting Scholar at the Pennsylvania State University, University Park, USA. Dr. Molla is interested in precise genome editing in rice and uses base editors and HDR methods for rice crop improvement in the laboratory of Yinong Yang at PSU.