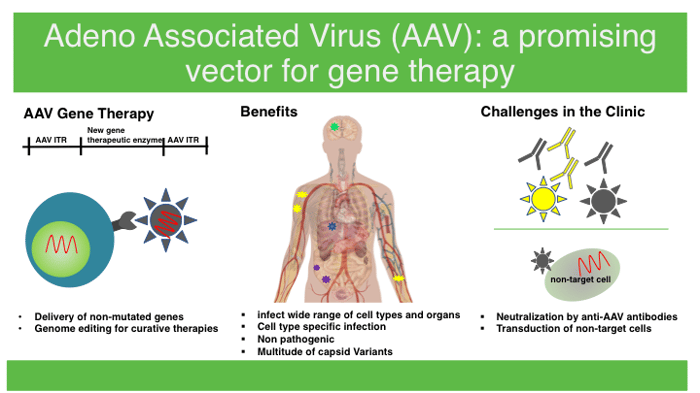 Gene therapy technologies hold great promise for improving or potentially curing human diseases that were previously thought to be incurable. Rapid advances in next generation sequencing technologies have allowed scientists to quickly identify underlying genetic causes of some human conditions, opening up new avenues for therapeutics that treat disease at the molecular level. For instance, if a disease is caused by a mutation in a single gene, it can potentially be treated by correcting the mutation or replacing the gene. A notable example is the treatment of Severe Combined Immune Deficiency disease (SCID-XI), also known as bubble boy syndrome. This disease is caused by mutations in the common cytokine receptor gamma chain (c) and is characterized by a lack of immune cell development and function. To date, gene therapy has been used to treat 10 infants with this disease. To do so, their T-cells were grown in vitro, their mutations corrected, and the T-cells were transferred back into the infants. Almost all patients have achieved persistent immunological reconstitution with a normally functioning T cell repertoire (1).

In this example, it was possible to transduce the T-cells outside the body and thereby correct the mutations using retroviral vectors. However, many diseases require techniques that can deliver gene therapies directly to the cells that need them. Adeno-associated virus (AAV) – based delivery techniques may hold the key.

In the simplest form, translating gene therapies from conceptual design to clinical trials involve identifying a therapeutic gene, finding a means to deliver it and identifying a suitable route of administration. However, until recently safe delivery of nucleic acid cargo (DNA or RNA) to target cells has been challenging. A variety of vector delivery technologies have been investigated including lentiviruses, adenovirus, and inorganic delivery tools such as nanoparticles. These technologies can have serious adverse effects, and their immunogenic or carcinogenic profiles have limited their usability in clinical settings. On the other hand, vectors derived from AAV have recently gained popularity as they are uniquely suited gene delivery vehicles with great safety profiles as well as other benefits.

There are a variety of key properties that distinguish AAVs as gene delivery tools:

AAVs in the clinic

Thus far, AAV vectors AAV1, AAV-2, AAV1-AAV2 hybrids, AAV-6, AAV-7, AAV-8, AAV-9 and AAVrh10 have been used in more than 183 gene therapy trials (http://www.abedia.com/wiley/vectors.php). These clinical trials have been directed at diseases including but not limited to hemophilia B, LPL deficiency, Cystic fibrosis, Muscular Dystrophy, Parkinson’s disease, and HIV. A notable landmark study showed significant clinical efficacy against a form of blindness known as Leber’s congenital amurosis (LCA). This disease is caused by mutations in the gene RPE65. It is characterized by childhood onset of blindness and was thought to be untreatable until 2008. Following a single dose of subretinal administration of rAAV2 carrying the human gene RPE65, patients with clinical diagnosis of LCA and mutations in RPE65 (n=3), showed significant improvements in vision over a period of 1 to 3 years – the treatment appears to be both safe and effective.

Although AAV-based gene therapies are promising, scientists are working to overcome key challenges to their efficacy:

While basic research and other ongoing clinical trials support the utility of AAV as a broadly applicable gene delivery tool, aspects of AAV biology should be taken into account when developing AAV-based therapies. Furthermore, deeper understanding of disease pathogenesis will enable robust therapeutic outcomes. In contrast to other gene delivery tools that are under consideration, recent advancements in various AAV technologies have vastly improved AAVs’ potential to become ideal vectors for gene delivery.

Many thanks to our guest blogger, Harshana S De Silva Feelixge.

Harshana S De Silva Feelixge is a researcher whose work has focused on gene therapy for viral infections. She is particularly passionate about HIV cure research and science communication.