One approach for monitoring brain activity is to monitor calcium dynamics. In neurons, calcium channels are activated during action potentials, leading to brief (~100 ms) increases in calcium levels (called calcium transients) in the cytoplasm (Helmchen et al., 1996; Koester and Sakmann, 2000; Hille, 2001). The concentration of free calcium in the cytoplasm of eukaryotic cell is about 100 nM and rises to the micromolar range during action potentials (Wadel et al., 2007). Thus, calcium levels are a proxy for neuronal activation (Broussard et al., 2017).

The main limitations of using calcium as an indicator for neuronal activity are that its quantities are also regulated by other bioprocesses whose rates can be variable depending on cell type. Thus, making inferences about activity from calcium level can become complicated depending on the context (Badura et al., 2014). 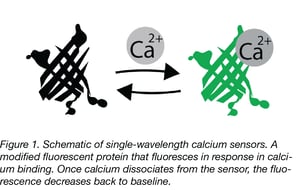 Single-wavelength sensors are based on single fluorescent proteins with fluorescence intensities that change in response to calcium binding. These sensors are measured at one wavelength, and generally turn “on/fluorescent” when calcium is present and binds to the detector, and “off” when calcium is absent and not bound to the sensors (Figure 1). Basically, once introduced into the brain, you can see these sensors light up in neurons that are active. When the neuron becomes inactive, calcium levels return to normal and the sensor turns off. In other words, these sensors are reversible, meaning calcium can dissociate from them, which puts the sensor back to its off state.

How quickly calcium comes off the sensor is particularly important for measuring different types of cell signalling. For example, sensors with higher affinity for calcium take a longer time to turn off after calcium levels return to normal. These sensors aren’t good at sensing frequent events, but are sensitive enough to detect the low levels of calcium that are generated from a smaller number of action potentials.

Single-wavelength sensors with differences in overall brightness, on/off kinetics, and calcium affinity have been developed and, based on these properties, are suitable for diverse applications. These variants are described below.

GCaMP indicators are some of the most popular calcium sensors (and have gone through various iterations, up to the current jGCaMP-X). GCaMP indicators are based on a modified GFP, a calcium-binding protein (calmodulin, CaM) and the M13 peptide. Upon binding calcium, CaM undergoes a conformational change that modifies the GFP chromophore, leading to increased GFP brightness. Thus, GCaMP indicators can be used to indicate calcium levels in real time. GCaMP variants have a range of on/off kinetics, and can be used to measure different types of cell activity. Specifically, the fastest variant (GCaMP6f) has a 2.6-fold higher Ca2+ affinity (lower kd) than the slow variant (GCaMP6s) (Table 1). As a result, GCaMP6f has close to a 4-fold faster rise time and decay time than GCaMP6s. Being more sensitive, GCaMP6s was able to detect single action potentials 99% of the time in mice in vivo relative to GCaMP6f, which was able to detect single action potentials 84% of the time.

The newest iteration of GCaMP sensors is available from Douglas Kim and the Janelia Research Institute. These GCaMP7 sensors all respond with greater signal amplitude to a single action potential stimulus than GCaMP6. Advantages of the individual sensors are as follows (see data here):

While useful, GCaMP proteins are limited by their green-ness. The wavelengths of their excitation and emission spectra are scattered by and can damage tissue, limiting imaging depth in vivo. To address these limitations, red-based calcium indicators based on similar architecture were developed (see jRCaMP1a, b and jRGECO1a).

One advantage of a red indicator is the ability to multiplex in either GFP mouse lines or with mice expressing other GFP-based tools. In this case, the red indicator can be measured independently of other GFP-based tools. Red light imaging in general also allows deeper tissues to be imaged, relative to green light imaging, and can be done with less excitation power (Rose et al., 2014). This is because light scattering is inversely proportional to wavelength, which applies both to the excitation and the emission lights.

These are red calcium indicators based on mRuby. jRCaMP1a and jRCaMP1b are less sensitive than jGCaMP6, but do not show photoswitching after illumination with blue light (as jRGECO1 does). Since some common optogenetic tools (e.g., Channelrhodopsin, ChR2) are illuminated by blue light, the stability of jRCaMP1a, b to this light makes them suitable for experiments that combine calcium imaging and optogenetics. jRCaMP1a and jRCaMP1b are also operate at slightly longer (more red) wavelengths than jRGECO1a, which enables clearer imaging (see note about scattering above).

This is a red calcium indicator based on mApple, which has comparable sensitivity to jGCaMP6. mApple-based GECIs, such as R-GECO and R-CaMP2, exhibit photoswitching when illuminated with blue light, causing a transient increase of red fluorescence that complicates their use with optogenetics tools (which are commonly activated by blue light). 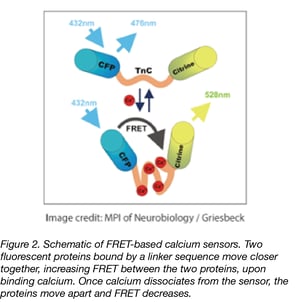 As opposed to single-wavelength sensors, FRET-based calcium sensors are based on two fluorescent proteins linked by a peptide and a calcium binding domain (e.g., CaM or Troponin). Calcium binding brings the FPs closer together, increasing FRET efficiency between the two proteins. In this way, FRET-based calcium sensors can be quantified by two wavelengths (the donor emission wavelength, and the acceptor emission wavelength).

Twitch indicators comprise two fluorescent proteins (FPs) connected by linkers and the Troponin calcium-binding domain (Figure 2). In the absence of calcium, Twitch forms an elongated structure in which the two FPs are farther apart (~5.2 nm). Upon binding of calcium, the FPs move closer together (~15 Å), increasing FRET efficiency between the donor and acceptor FPs. The donor and acceptor FPs in Twitch2B (mCerulean3 and cpVenusCD, respectively) have the advantage of particularly bright donor emission spectra.

FRET-based calcium indicators have the advantage of being brighter than single-wavelength sensors at rest, allowing better visualization in cells (Thestrup et al., 2014), and have been shown to detect calcium within cellular compartments (Russell, 2011). Relative to FRET-based indicators, however, the GCaMP sensors have the advantage of greater fluorescence changes in response to Ca2+ binding (Russell, 2011). For example, upon calcium binding, Twitch-2B has about a 2-fold increase in acceptor FP fluorescence (Thestrup et al., 2014), while jGCaMP6 sensors showed a dynamic range of about 10-fold (Chen et al., 2013).

The ability to track brain activity in real time is great when you’re watching the brain in real time. But these real-time signals turn off and can only be detected if your microscope is focused on them at the exact time that they’re activated (which is basically limited by the field of your microscope). Essentially, real time sensors have the advantage of enabling long-term detection of brain activity, but only in small areas. On the other hand, using irreversible calcium sensors, it’s possible to detect activity in the entire brain without directly monitoring it, but only for a few seconds.

Calcium-modulated photoactivatable ratiometric integrator (CaMPARI) differs from the reversible calcium sensors because it gives a permanent record of calcium activity during a user-defined time period. This integrator works by converting from green to red only in the simultaneous presence of high calcium levels and user-supplied violet light (Figure 3). This permanent conversion provides the ability to record calcium levels over broad areas of the brain over a user-specified time period, and the red fluorescence intensity correlates with calcium concentration. CaMPARI complements existing calcium indicators by allowing total calcium activity measurement over large areas of cells and tissues.

Overall, there is no shortage of available calcium indicators, though each type of indicator has its own advantages and limits. The best indicator will vary based the type of biological activity being measured.