A Practical Approach to Choosing the B(right)est Fluorescent Protein

This post was contributed by guest bloggers Joachim Goedhart and Marieke Mastop from the Section of Molecular Cytology and Van Leeuwenhoek Centre for Advanced Microscopy, University of Amsterdam.

The properties of fluorescent proteins are usually only examined under a few conditions since it is impossible to check all possible combinations of biology and equipment. Because the performance of a fluorescent protein strongly depends on both the biological system as well as the imaging method, we recommend basing your selection on a small-scale head-to-head comparative study under conditions that best mimic the intended application. The three key properties for live cell imaging that will be treated in this series of posts are (i) brightness, (ii) photostability and (iii) aggregation tendency.

A protein with a high intrinsic brightness that does not fold well or cannot be detected in a microscopy setup has zero practical brightness and is of no use. Therefore, it is more sensible to compare fluorescent proteins based on their practical brightness in your experimental set up. The practical brightness takes all application specific parameters into account, including the specs of your microscope (excitation wavelength, available emission filters, and detector sensitivity) and the biological system (temperature, prokaryote versus eukaryote, background fluorescence).

When a dish of mammalian cells is transiently transfected with a plasmid containing a fluorescent protein (fusion) there is huge variation in the fluorescence intensities of individual mammalian cells within the dish. This is caused by the stochastic nature of plasmid uptake by cells. To correct for this variation, a reference fluorescent protein that is expressed at an equal level (Goedhart et al, 2011) can be used. Another way to dodge cellular variation observed in mammalian cells is to tag an endogenous gene. By imaging cells (or tissues) that produce an endogenous protein tagged with a fluorescent protein and repeating this with another fluorescent protein, a ranking of practical brightness can be made. This strategy has been used in yeast by Lee et al (2013) and in nematodes by El Mouridi et al (2017) and Heppert et al (2016). In mammalian cells this would be possible with CRISPR/Cas-based genome editing. 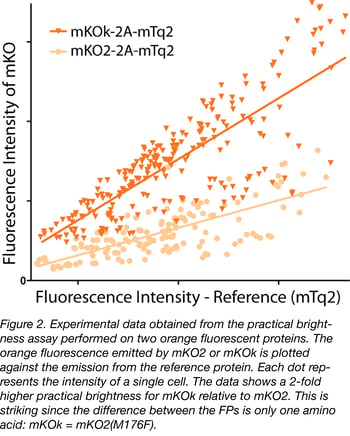 Many thanks to our guest bloggers Joachim Goedhard and Marieke Mastop!