An estimated 320,000 viruses can infect mammals. Even more abundant are the Earth’s estimated 1031 bacteriophages (viruses that infect bacteria), many of which are doing important work in our microbiomes. Given that viruses are everywhere and doing everything, it can be annoying when we try to use them in an experiment and they don't do anything.

Viruses are complicated and they perform complex biological tasks, both of which are factors in the technical challenges they can present. Many researchers find themselves plagued by troubleshooting a virus-based experiment at one point or another. After amplifying a viral vector, collecting virus, and transducing target cells, one may have the unfortunate experience of witnessing…nothing. For some unclear reason, cells are not getting transduced. Here, I will share five hail Marys that have helped me troubleshoot some technical obstacles when working with virus:

Depending on the composition of the viral vector and the repeat sequences present in the LTR, the vector may undergo genomic rearrangements during replication. To avoid genomic rearrangements, try amplifying the viral vector with bacteria designed to minimize rearrangements such as NEB Stable or use a standard strain, like DH5α, grown at 30 °C instead of 37 °C. If you’re unsure about the integrity of your virus, perform a diagnostic restriction enzyme digest and compare it to some reliable controls.

2. Viral stocks may be sensitive to freeze thaw cycles.

Depending on the researcher and the type of virus, there have been varied reports of titer losses from 5% to 50% per freeze thaw cycle (Krajden et al., 1999;  Ugai et al., 2002). If the virus will be used in a couple of days, some researchers prefer to store freshly harvested virus at 4 °C instead of storing it briefly at -80 °C. If troubleshooting, the safest option may be to avoid freezing altogether, and instead to use the virus immediately upon harvesting. Interestingly, freeze-thawing host cells immediately prior to their transduction has been shown to increase AAV transduction efficiency by approximately 15-fold (Chen et al., 2006). 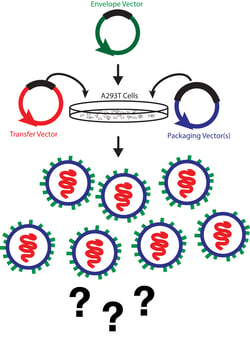 Alternatively, to concentrate a virus solution without ultracentrifugation, you can reduce the volume of cell culture medium on the packaging cells immediately following transfection. In other words, when exchanging the medium after transfecting cells, replace the medium with half the volume typically used (e.g., use 5 mL medium on a 10 cm plate). By reducing the culture volume into which the virus is released, a more concentrated virus solution can be obtained.

5. Check your packaging cells for infection

If your transductions aren’t working, you can check if virus is being generated by your transfected packaging cells. This check can be performed routinely and without disrupting the flow of your experiment. If your packaging cells have been successfully transfected and produced infectious virus, they may get infected with this virus, and therefore, will be selectable with the antibiotic whose resistance gene is encoded in the viral vector. This antibiotic selection can be performed approximately 72 hours after transfection and should give rise to a surviving population of approximately 20–50% of the packaging cells after 1–3 days of selection. A lower percentage of surviving cells may be the result of plasmid integration via recombination during transfection, and does not necessarily indicate the production of virus. Alternatively, if the virus encodes a fluorescent protein, the packaging cells could be examined with a microscope and should appear fluorescent if they were infected. While there may be some low-level fluorescent protein or resistance marker expression following transfection, higher-level expression after approximately 72 hours is likely the result of successful viral transduction. This method may not work if the virus does not have the proper tropism to infect the packaging cells. Another method of ensuring viral production is to perform PCR against components of the viral vector using the harvested viral solution as a PCR template.

Regardless of the type of virus you’re working with, there’s a lot that goes into virus design, production, and transduction. Once you’ve harvested, it’s generally a good idea to titer your virus. Getting an accurate count of the number of infectious particles in a given viral stock will give you a sense of the infectivity of your viral stock, save you time, and allow you to standardize your experiments later. Stay tuned to the Addgene blog and be sure to check out our viral vector guide pages to get up-to-date tips for your virus experiments.

Additional Resources on the Addgene.org