Using Virus in Your Research - A Primer for Beginners 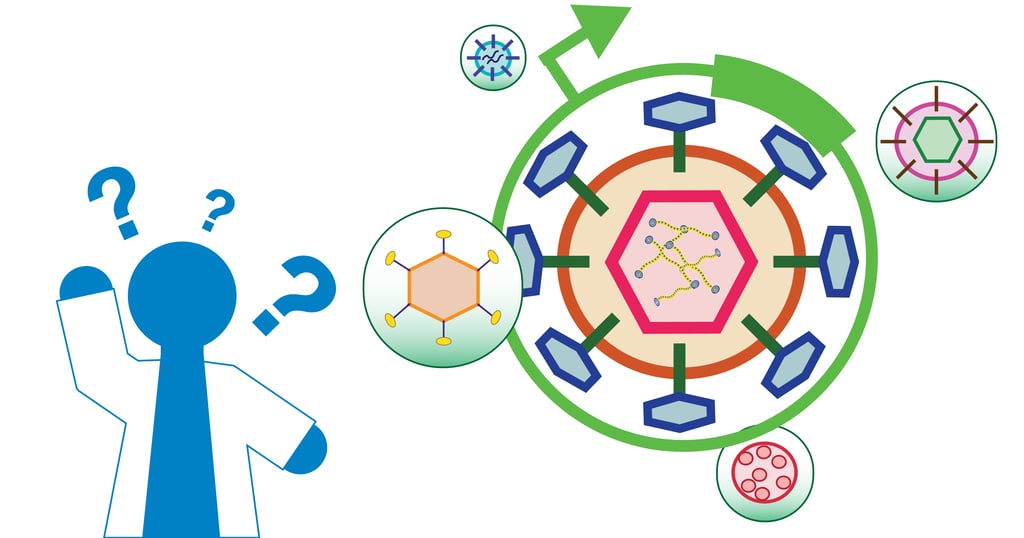 We’ve all had the feeling where it seems like we’re the only one in the room who doesn’t know about an important scientific principle.

Other science person: Well at least it wasn’t a ribonucleic acid!

Everyone else: (huge uproar of laughter)

With new technologies being developed and shared more easily than ever, it may be difficult to keep up with how much there is to know. One well-established and widely popular technology (that scientists love to discuss) is virus-- specifically, using viruses as research tools. Viruses are appealing because they are widely available, customizable, and allow manipulation of genetic material within a living cell. Thanks to major advances in DNA sequencing, synthesis, and cloning over the past decade, more researchers rely on viruses to perform complex genome engineering tasks. The wide array of viral tools and applications available can make it difficult for the uninitiated researcher to determine the best way to design an experiment using virus. In this post, I will give a brief introduction to viruses and discuss some of their important characteristics to help get any virus novice started.

In general, viruses allow us to deliver genetic material to living cells. Researchers typically use viruses for two types of studies—(1) knock-in; introducing a protein-coding gene into cells to study its function, or (2) knockout/knockdown; studying gene function through deletion (potentially using CRISPR lentivirus knockout libraries) or reduction of gene expression, respectively. If you are a researcher who will be using virus for the first time, here are a few considerations to get you started.

Addgene provides vectors that can be used to produce four main types of virus: 𝛄-retrovirus, lentivirus (a subtype of retrovirus), adenovirus, and adeno-associated virus (AAV). Each type of virus can be used for specific research applications. Retroviruses, a family of viruses that stably integrates into the host genome, are one of the most popular types of virus. While retroviruses generally only infect dividing cells (because their access to the host genome is thought to rely on the breakdown of the nuclear envelope that occurs in mitosis [Roe et al., 1993]), lentiviruses are a genus of the retroviral family that can infect non-dividing cells (possibly through the use of nuclear localization signals by the viral components [Bukrinsky et al., 1992]), and thus, offer an advantage when transducing certain cell types that exhibit limited cell division (e.g., neurons). Adenoviruses, which are part of a separate family, can also infect non-dividing cells and are generally used to achieve transient high gene expression. Because adenoviruses do not integrate into the host genome and instead remain episomal, they do not disrupt the host genome and thus avoid the insertional mutagenesis associated with the random insertion of some retroviruses [Coffin et al., 1997]. Adenoviruses also have the advantage of accommodating relatively large inserts (>8 kb). Adeno-associated viruses (AAVs) also remain episomal, have the ability to infect non-dividing cells, and (because of their low immunogenicity) are attractive tools for gene therapy. Details about the advantages and disadvantages of each virus are listed in the table below.

The buck stops at the transduced cell

Given that they cannot use a host cell, production of replication incompetent virus particles is achieved by particular cells that are able to replicate the viral genome (called packaging cells) and necessitates the presence of other plasmids besides the original viral vector (called helper plasmids or packaging plasmids) that provide replication machinery and virus structural components. Once a sufficient number of virus particles have been generated by the packaging cells, they can then be harvested and used to transduce target cells of interest.

A commonly used packaging cell type is the 293T (or HEK293T) cell line. These cells are so called because they stably express the SV40 large T antigen, which is required for efficient replication of plasmids containing the SV40 origin of replication. Given that many viral vectors contain the SV40 origin of replication, 293T cells are able to produce high viral titers. In addition to the viral vector itself, each virus particle comprises a viral envelope that fuses with the target cell’s membrane and determines target cell specificity or tropism (see Viruses of a Feather Infect Together, below), and a protein capsid that encloses the genetic material. These components are delivered through packaging plasmids encoding the gag, pol, and env genes, which contribute to the virion structure. Some packaging cells already stably express these genes (e.g., 293GP), which eliminates the requirement for packaging plasmids during viral particle production.

Viruses of a feather infect together

Depending on the composition of the viral envelope, viruses exhibit particular patterns of cell tropism, and thus are suited for infecting specific cell types. Pseudotyping is the process of producing viruses with foreign envelope proteins and is frequently used to generate viruses with altered cell tropism [Cronin et al., 2006]. For example, VSV-G pseudotyped viruses can be used to transduce cells of almost any species (termed pantropic). Alternatively, ecotropic viruses have tropism that is generally limited to a small group of species or cell types (like mice and rats), while amphotropic refers to a virus that can transduce a wide range of hosts.

Not all vector sequences are created equal

Viruses are often used to study the function of a particular gene, either through overexpression, knockdown, or knockout. Designing viral vectors for gene overexpression can be relatively straightforward in that the gene coding sequence can simply be subcloned into a viral vector (though codon optimization of the sequence could increase protein expression within different species). Designing vectors to knockdown (with RNAi) or knockout (with CRISPR) gene expression, however, can be more complicated because the same gene can be targeted by a variety of vector sequences, each of which can exhibit a different targeting efficiency and exhibit unintended off target effects. Fortunately, there are resources available to help researchers design sequences to minimize off target effects and other potential complications. Some of these resources are listed below. However, whether using RNAi or CRISPR, it is of utmost importance to test multiple targeting sequences. By comparing the effects of multiple sequences, you can determine the extent of off target effects and infer the true biological effect of a gene product.

For designing an RNAi sequence or a guide RNA sequence:

An Addgene blog post on how to design guide RNAs, including links to bioinformatics tools for minimizing off target effects:

When using virus for the first time or bringing virus into a new lab space, there are safety protocols that should be established. Two major safety concerns of working with viruses are the potential for generation of replication competent virus, and the potential for oncogenesis (in a host cell) via insertional mutagenesis. Separating the virus into multiple plasmids (as described above) can minimize the replication potential of the virus. In addition, careful containment of reagents and tools that have come in contact with the viral particles is essential for preventing exposure to the virus. Before working with virus, researchers should consult their institutions to receive safety training and learn important safety protocols.

Overall, viruses are an exciting research tool that can be used to investigate many types of research questions. This post hopefully served as an introduction to some of the important features of viruses and provided some useful terms and articles to further expand your understanding of these complex molecules. Stay tuned for a future post containing tips for the virus expert!

Leila Haery is a Research Scientist at Addgene and is interested in science education.