What are scientists up to on Twitter? Prior to writing this post, my interest in Twitter was fleeting. I’ve had an account for three years and have only tweeted 6 times: #fail. I’d hoped to use Twitter professionally to network, learn more about alternative careers for scientists, and share cool science. Unfortunately, it never clicked for me. Recently my interest was renewed in part due to FOMO  but mostly because of this article: “A systematic identification and analysis of scientists on Twitter.” This paper addresses the following questions about scientists on Twitter: who are they? What do they share? And how they are connected? Here are the highlights written as 8 tweetable facts.

Note: The images used in this post were created using data from or modified from Ke et al. 2017.

1. Among scientists, historians have the most Twitter users. Biologists rank #8.

Mathematical, life, and physical scientists are underrepresented. It’s important to note that these results could be biased for two reasons: 1) they are based on the US Occupational Employment Statistics (OES), but international Twitter users were included in the dataset; 2) users not part of a scientific Twitter list were excluded from the dataset. 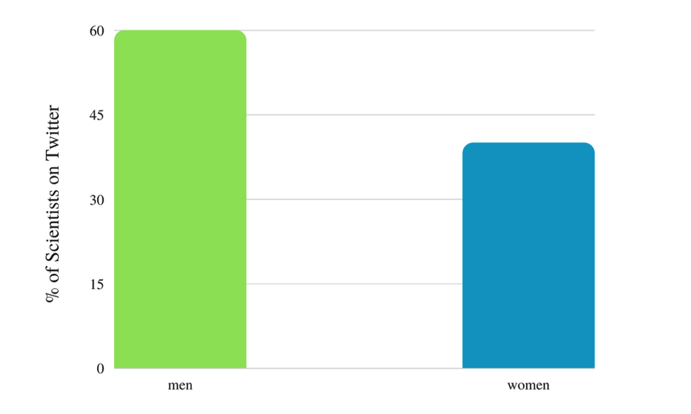 Social media and news sites were also popular. Perhaps scientists, like nonscientists, blur the line between professional and personal on Twitter. Or maybe scientist prefer to share links to research that isn’t behind paywalls.

5. The #1 (re)tweeted science domain by scientists was Nature. Overall scientists tweet URLs with scientific domains <10% of the time. 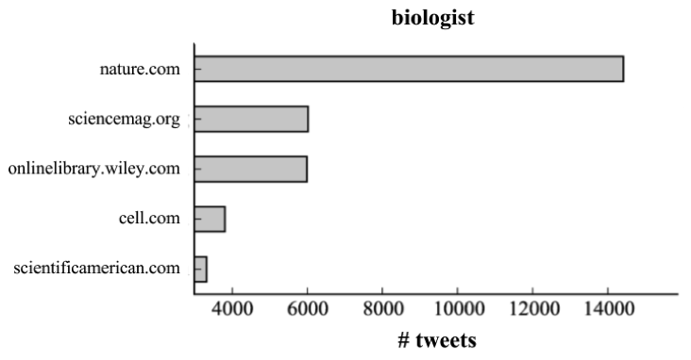 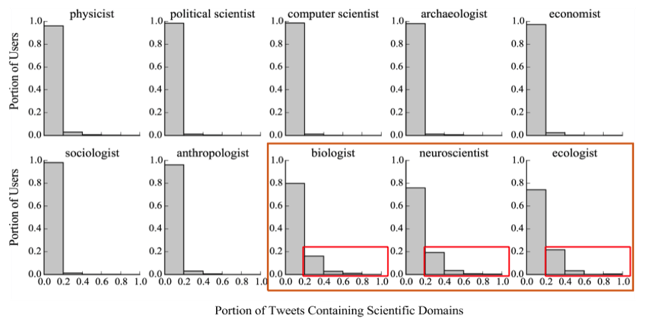 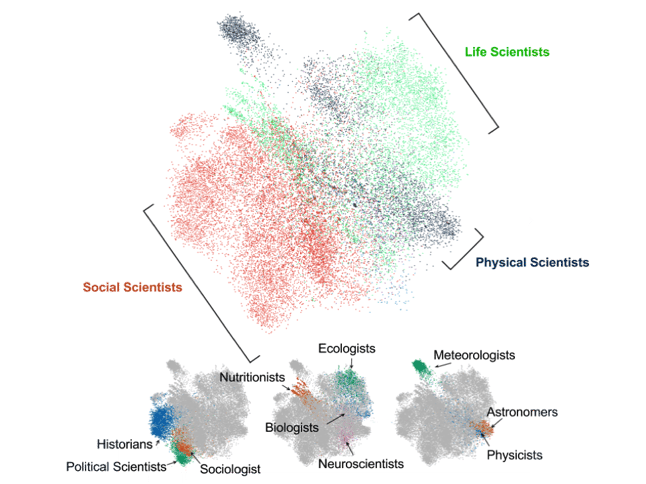 Figure 6: Follower Network of Scientists on Twitter. Each dot represents a scientist. Only scientists who follow each other, or are friends, are included in this cluster analysis. The closer two dots are to each other, the more friends they have in common. Only the largest connected part of the follower network is shown. Top: The follower network of life (green), physical (blue) and social (orange)  scientists largely cluster by discipline, suggesting that scientists tend to follow scientists within their field rather than outside their field. Lower: Follower networks of subgroups of scientific disciplines: social (left), life (center), and physical (right).