The catalytically dead Cas9 protein (dCas9) is well known for its ability to bind DNA targets without changing them. Thus, it has been widely adapted for a wide variety of applications: base editing, CRISPR activation and inhibition, among others. Over the past few years, dCas9 has also become a robust visualization tool to study the spatial and temporal arrangement of chromosomes and how these arrangements may affect nuclear processes. The latest of these visualization tools is CRISPR-Sirius, the brightest CRISPR-based tool to date for visualizing genomic loci in living cells.

In 2015, Thoru Pederson’s lab at the University of Massachusetts Medical School developed a dCas9-based multicolor labeling system to visualize chromosomal loci in human cells (Ma et al., 2015). To do so, they fused a different fluorescent protein to various Cas9 variants, SpCas9, NmCas9, and St1Cas9. These fusions localized to specific loci based on the guide RNA sequence.

A year later, they developed CRISPRainbow (Ma et al., 2016), a set of gRNA scaffolds that contain two hairpin sequences (either MS2, PP7, or boxB) that each recruits a different fluorescent protein (BFP, GFP, or RFP) to the genomic loci of interest. Pairs of identical hairpins within one gRNA will result in a blue, green, or red readout. But gRNAs containing two different hairpins will produce a secondary color (yellow, cyan, or magenta) depending on the hairpin combination. A gRNA containing all three hairpins produces a white color. While CRISPRainbow allows for simultaneous visualization of sites on different chromosomes in living cells, the system requires high-copy chromosome-specific loci in the genome and the guides are relatively unstable. 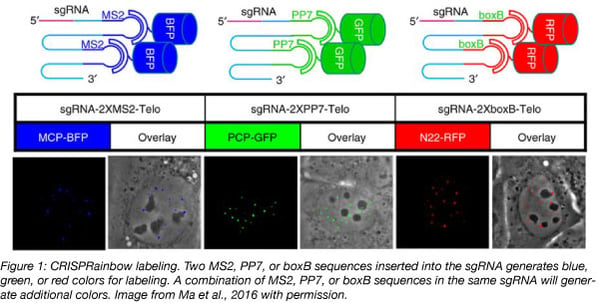 First, they began with the Broccoli aptamer system to visualize the gRNA in living cells. Broccoli aptamers are nucleic acid sequences that bind to the small molecule, DFHBI-1T to induce its fluorescence. They found that aptamer insertion in the gRNA tetraloop (a four base hairpin loop motif within the gRNA) resulted in a more stable gRNA than when they inserted the aptamer at the 3’ end of the gRNA.

Because of the success of the MS2 and PP7 RNA hairpin sequences in CRISPRainbow, they knew they could be good candidates for further development. They inserted an octet of MS2 hairpins into the gRNA tetraloop and went through subsequent design iterations to increase stability and minimize misfolding and recombination during virus production needed to deliver CRISPR-Sirius into cells. They named this guide sgRNA-Sirius-8XMS2 which will recruit the HaloTag with red fluorescent ligands to the loci of interest.

In order to label two loci simultaneously, Ma and Pederson created another sgRNA containing the PP7 hairpin sequence (sgRNA-Sirius-8XPP7) to recruit GFP to the loci of interest. To determine how the sgRNA-Sirius-8XPP7 and sgRNA-Sirius-8XMS2 scaffolds performed, they compared them head-to-head against CRISPRainbow. Both tools were targeted to the FBN3 intronic repeat which contains 22 copies of the gRNA target site. In addition to increased brightness, they also found that the signal to noise ratio can be increased from 2-fold (by CRISPRainbow) to 3-fold with CRISPR-Sirius.

With a third sgRNA containing alternating MS2 and PP7 sequences (sgRNA-Sirius-4X(MS2-PP7)) that result in yellow fluorescence at the loci of interest, the team could visualize three loci and measure inter-locus distances. They tested this system out on chromosome 19 by targeting 46 repetitive loci that contained  ≥20 copies of the gRNA target site. Of these, 26 of the 46 loci gave a detectable signal in human U2OS cells. Based upon this, they chose an intergenic DNA region (IDR3) as a reference loci to measure inter-locus distances of loci pairs from intergenic regions, intronic regions, and a pericentromeric region. All pairs were easily visualized and results were consistent with copy number variation (CNV) analysis of the U2OS cells. 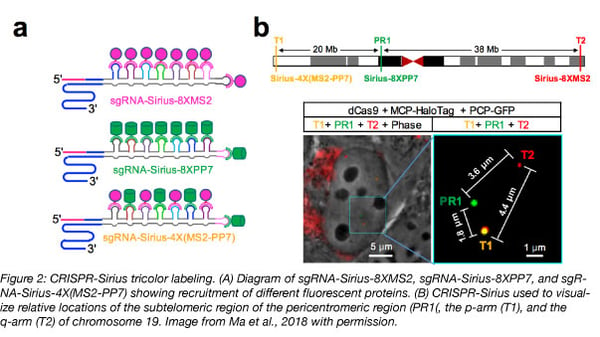