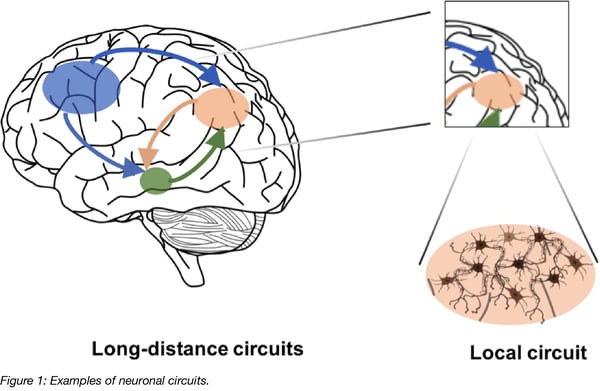 In neuronal tracing experiments, brain tissue is injected with compounds that intracellularly spread away from the site of application and aid in visualization of the morphology of individual neurons, including dendritic and axonal extensions and, most importantly, any connections the neurons make to other distant brain areas. It is desirable for tracing compounds to outline neurons in the direction of information flow in order to understand which brain regions communicate with each other and how they do it (i.e. where the signals come from and what implications their signaling is likely to have). Anterograde tracing outlines neurons from their cell bodies to the terminals of their axons; while retrograde tracing outlines neurons in the opposite direction, from the terminals of their axons to their cell bodies.

To facilitate cellular uptake of these dyes in vivo, microinjection, pressure injection or iontophoresis (applying small electric currents via inserted electrodes) may be applied, but these methods can have a negative impact on cellular health. Another limitation of traditional tracing compounds is that their diffusion across the synaptic cleft is usually severely impaired, and only few reports exist about dye molecules that are transported from one neuron to another at synapses resulting in faint signals (Schwab et al., 1979; Buttry & Goshgarian, 2015). Nevertheless, the use of these tracers over the past few decades was essential to build up our current understanding of neuroanatomy and neural connectivity, providing valuable insights for neuronal communication.

Viral vectors and the nervous system

With the advent of viral vector technology, new methods have been developed to study neuronal connectivity. These methods are less neurotoxic and better compatible with other neuroscience methods such as electrophysiological recordings. The origins of these methods are naturally occurring viruses that infect, persist, and migrate within neurons, and that are also capable of spreading across synaptic connections. Most famous is the Rabies Virus (RABV) which moves retrogradely from a peripheral site of infection to the central nervous system where it replicates, spreads, causes neurotoxicity, and is lethal if left untreated (for review see Dietzschold et al., 2008). Herpes Simplex Virus (HSV) also migrates through neurons where it can replicate and by doing so spread across several synaptic connections (Ugolini et al., 1989). When using these viruses to mark neuronal connectivity a large majority of neuronal cells are labeled overtime due to the continued replication of the virus. While this can be useful, if too many neurons are labeled, it can be difficult to accurately map network connections (Lo & Anderson, 2011).

In the past two decades, several virus species have been modified and used as tools for tracing. With some engineering, RABV and HSV, but also others including pseudorabies virus type 1, vesicular stomatitis virus (VSV; Beier et al., 2011), adenovirus, and adeno-associated virus (AAV), have been used for tracing and visualizing motor, visual, and auditory neuronal circuitry in vivo. A variant of RABV has been developed to only label a neuronal connection via a single synaptic step, thus preventing further widespread expansion of RABV. This improvement resulted in a clearer picture of neuronal connectivity in the mammalian brain (Wickersham et al., 2007; plasmids at Addgene).

AAV vectors have been widely used by neuroscientists for some time due to their advantageous characteristics for brain research and their ability to introduce genetic material into neuronal cells. The AAV genome is a single-stranded DNA molecule and AAV vectors are replication deficient (i.e. they cannot easily spread between cells like natural RABV or HSV can). AAV does not have a membrane envelope like lentivirus, but instead is contained by a capsid which is comprised of the viral proteins VP1, VP2, and VP3. To date several hundred variants, or serotypes, have been found naturally or have been genetically engineered to have differences in their capsid proteins. For a brief overview see Addgene’s AAV guide.

AAV particles are relatively small (20 nm) in size which makes them capable of diffusing in the extracellular space; they also have low immunogenicity and cellular toxicity. AAV vectors can be equipped with strong promoters for high and neuron-specific transgene expression. Fluorescent proteins are widely used for tracing and their expression is often made Cre-dependent. If Cre-dependent vectors are used in transgenic animals that express Cre in only specific cell types, for example only dopaminergic neurons, neuronal tracing has the added benefit of only labelling the subset of infected cells that also express Cre. Another advantage of AAV vectors is that there are well-established protocols for their production and purification that yield high titers (see also AAV protocols for production, purification and titration on the Addgene website). 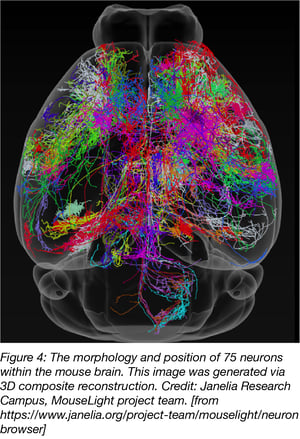 AAV vectors are the first choice of many neuroscientists, with many groups using them to map neuronal networks. Kohara et al. 2014 traced neurons with an AAV9 vector expressing a Cre-dependent fluorescent marker. Injection into a conditional mutant mouse brain that expressed Cre recombinase only in pyramidal cells of the hippocampal region CA2 allowed for detailed mapping of the neuronal circuitry involved in learning and memory (Kohara et al., 2014; plasmids at Addgene).

The Gradinaru Lab at the California Institute of Technology generated novel AAVs (Chan et al., 2017) that express one of a few different fluorescent proteins (red, green, blue). If a researcher injects a cocktail of these different AAV vectors into a brain region, the AAV particles will infect neurons at different ratios, making these neurons fluoresce in different colors. An individual neuron can then be traced throughout the brain based on its unique hue (plasmids at Addgene).

A large-scale example of neuronal tracing with AAV vectors is the Allen Mouse Brain Connectivity Atlas, a project to map neuronal connections in the mouse brain. For this project, AAV1 was used as an anterograde tracer and injected at several hundred sites across the entire mouse brain. Traced neurons expressed a fluorescent marker in areas close or distal to the injection site across the entire brain, allowing for an unprecedented number of connections, or the “connectome”, to be visualized in a uniform and standardized way (Oh et al., 2014). Images yielded from this study can be found on the Allen Mouse Brain Connectivity Atlas website.

A similar approach was used by researchers from the Janelia Campus for their MouseLight project but neurons were traced with AAV2. Two-Photon imaging was used to generate a 3D finemap of neurons in the mouse brain. MouseLight images can be found on the MouseLight website. 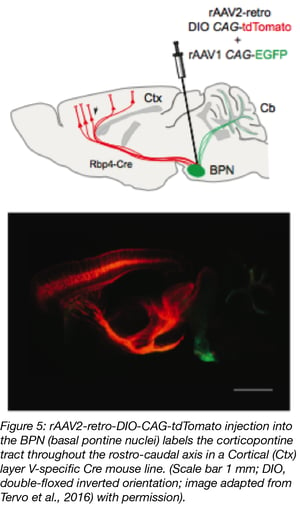 Together with scientists at the University of California, Berkeley, the Janelia Research Campus also developed a new AAV variant, rAAV2-retro, that migrates retrogradely at higher rates than any other AAV serotype (Tervo et al., 2016; plasmid at Addgene). Its efficiency is comparable to conventional dye-based tracing while also having the added advantage of lower toxicity, higher specificity and reduced technical variability compared to chemical tracers. rAAV2-retro also has lower affinity for heparin, which possibly explains why it’s less likely to be sequestered in the extracellular space. In addition, rAAV2-retro’s altered amino acid sequence might facilitate interaction with uptake or intracellular transport machinery. Addgene offers viral preparations of AAV2-retro vectors with a variety of transgene/promoter combinations. Check out our retrograde AAV blog post.

An additional desirable property for network visualization would be the ability to spread trans-synaptically on to subsequent neurons. AAV vectors are replication incompetent and cannot readily be passed on to subsequent cells via replication like RABV or HSV. There are, however, a few reports of trans-synaptic spreading of some AAVs, specifically AAV6 in the retrograde direction and AAV2 in the anterograde direction (Salegio et al., 2013). Zingg et al. 2017 also provide evidence that AAV1 and AAV9 are capable of synaptic spread. The underlying mechanisms of trans-synaptic trafficking are not fully understood and may be a form of transcytosis where the AAV particle is taken up on one side of the cell and released again at another side of the cell after intracellular transport without actually causing infection or leading to transgene expression within the first cell. While there is always a risk that viral particles will diffuse long distances within the extracellular space along an axon, this does not seem to be the case for either AAV1 or AAV9. It should be noted that AAV9 was shown to cross the blood brain barrier by endothelial transcytosis (Foust et al., 2009; Merkel et al., 2017), and these two modes of transport may share common mechanisms. Rare observations like these may be a starting point for future developments in the field of AAV vectors.

An ideal comprehensive toolset for neuronal tracing and network identification requires both antero- and retrograde labelling, synaptic restriction as well as controlled monosynaptic and polysynaptic spreading. AAV vectors cover some of these attributes and their use has allowed for the visualization of single connection networks within the rodent brain. A better understanding of the routes and mechanisms of intracellular transport of AAV could facilitate the development of more powerful AAV serotypes, and perhaps lead to controlled trans-synaptic spread of AAV vectors. Improved neuronal tracing could also be achieved by using optogenetically controlled transgenes, in combination with conditional transgenic mice, to reveal not only the anatomy of neuronal connections, but to visualize neuron connections that are functionally relevant, i.e. activity-dependent neuronal tracing. Apart from mapping neuronal networks, improved AAV vectors could also be powerful tools for the field of gene therapy if they can reach the affected part of the brain in a less invasive manner . For example, in neuromuscular diseases it would be desirable to achieve transgene delivery by targeting peripheral structures (such as injection into muscle) as opposed to direct intracerebral application, which is more invasive and has a much higher risk of complications.