This post was contributed by guest bloggers Alissa Lance-Byrne and Alex Chavez, researchers at the Wyss Institute for Biologically Inspired Engineering.

CRISPR/Cas9 technology has revolutionized the fields of molecular biology and bioengineering, as it has facilitated the development of a simple and scalable means of making targeted genetic edits. Cas9 is a DNA binding protein that can be directed to virtually any genetic locus when complexed with an appropriately designed small RNA, or guide RNA (gRNA). The gRNA conventionally contains a 20-nucleotide sequence that is complementary to the target site, or protospacer, in the genome. Native Cas9 has two catalytic domains, each of which cleaves one strand of DNA upon binding the protospacer. The resulting double strand break (DSB) stimulates DNA repair mechanisms that can be exploited to either inactivate a gene or introduce a desired genetic alteration.

Listen to Our Podcast Intervew with Alex Chavez In addition to its utility in making targeted modifications to DNA, Cas9 can be reprogrammed to serve as a regulator of gene expression. Its catalytic domains can be mutated to inactivate the protein’s nucleolytic capability, and this nuclease-null or “dead” Cas9 (dCas9) variant can then be fused to effector domains such as transcriptional activators or repressors. These fusion proteins retain the ability to recognize and bind to DNA; when complexed with a gRNA that directs them to the promoter of a gene of interest, they have been shown to dramatically alter levels of expression.

Cas9’s ability to alternately serve both as a means of modifying DNA and of modulating gene expression makes it an invaluable tool in the interrogation of gene function. However, there are limitations to a system that relies on two distinct Cas9 variants—nuclease-competent or nuclease-null—in order to effect different perturbations. Consider, for instance, the challenge of attempting to simultaneously and selectively induce both cutting and regulation of expression at different genetic loci within a single cell. One might imagine transfecting cells with both the nuclease-positive and nuclease-null variants of Cas9 along with the necessary gRNAs, but it would not be possible to control which gRNA becomes complexed with which variant of Cas9. To circumvent this problem, previous studies have proposed the concurrent use of “orthogonal” Cas9 proteins derived from different bacterial species, each of which interacts with a distinct gRNA that allows users to decide which Cas9 protein is directed to which target site (1). Although this is possible, this strategy suffers from several limitations. Perhaps most importantly, most Cas9 orthologs are less well characterized than the conventionally used SpCas9 (derived from the bacterium Streptococcus pyogenes). Consequently, fewer genetic tools for targeted transcriptional and epigenetic regulation have been validated with these proteins. Furthermore, among those Cas9 orthologs that have been scrutinized, the majority have been shown to exhibit more limited activity than SpCas9 (2). In many cases this is due both to lower relative nuclease efficiencies as well as to more stringent targeting rules that result in a decrease in available target sites. 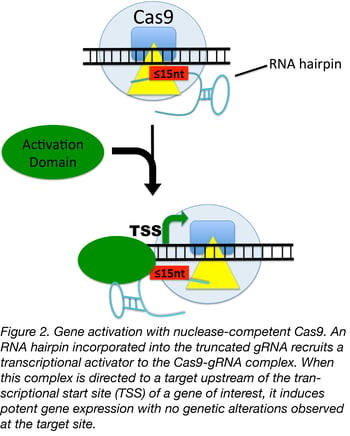 An alternative approach is to modulate Cas9’s nuclease activity by modifying the gRNA with which it is complexed rather than the protein itself. When native Cas9 is complexed with a gRNA that has been truncated such that it exhibits 15 or fewer nucleotides of complementarity to a target site, Cas9’s DNA binding capability remains intact while its nucleolytic activity is eliminated (Fig. 1) (1, 3). The gRNA can be further modified by incorporation of an RNA hairpin, such as the MS2 hairpin, that is capable of recruiting additional effector domains (4). Taken together, these minor gRNA alterations can be exploited to quickly and inexpensively generate a potent Cas9-based transcriptional regulator without making any functional changes to Cas9. For instance, when native (nuclease-competent) Cas9 interacts with a ≤15nt gRNA that contains an RNA adapter capable of recruiting a transcriptional activator, robust regulation of gene expression is observed in the absence of genome editing (Fig. 2 and 3) (5, 3). 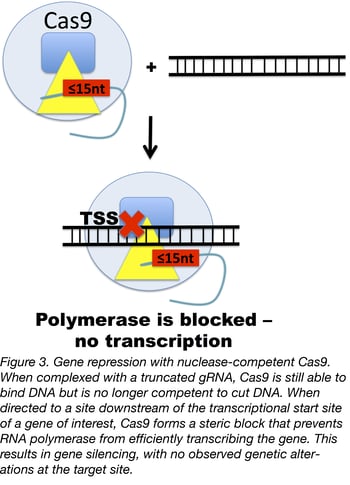 Importantly, the use of truncated guides has largely been demonstrated to result in decreased mismatch tolerance and, consequently, increased specificity relative to the more commonly employed 20nt gRNAs. It should be noted, however, that on rare occasions truncated gRNAs (≤15nt) have been found to retain some ability to induce Cas9 to make edits (AC, WLC, and JQ, unpublished results). An additional benefit of the use of truncated guides is that they can be delivered into systems that already express nuclease-competent Cas9, obviating the need to generate new cell lines or transgenic animals expressing dCas9 as a means of modulating gene expression (6).

Altering the length of gRNAs targeting different sites of interest thus represents a straightforward means of exerting tight control over Cas9 nuclease activity while eliminating the reliance on orthogonal Cas9 species. Within a single cell, full-length guides targeting one set of genetic loci can be introduced together with truncated gRNAs targeting a different set of loci to induce simultaneous cutting and transcriptional activation or repression at the respective sites.

Many thanks to our guest bloggers Alissa Lance-Byrne and Alex Chavez!

Alissa Lance-Byrne is a graduate student at the University of California, Santa Cruz, where her research is focused on engineering nanoparticles as drug delivery systems. She is also a NASA Fellow studying biosignature preservation in Mars analogue environments.