Feelings of delight associated with the brain’s reward circuits are generally linked to dopamine (DA), a well-known reward chemical and neurotransmitter. But aside from DA’s famous role as the “happy hormone,” it’s also involved in reinforcement learning, decision making, and motor control.

What do we understand about Dopamine?

DA is produced by specific dopaminergic neurons in a brain region called the substantia nigra, which is the main source of the body’s DA. Neurons often fire at a certain frequency, and this frequency can indicate behavioral state, for example, if someone is awake, agitated, or asleep. Though DA firing patterns (or the frequency of its release) are well understood, the direct effect of DA binding to a target neuron is more mysterious. Thus, scientists have developed several ways to sense dopamine. 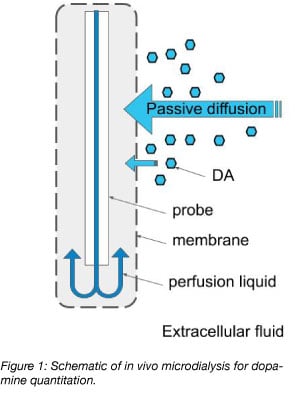 The gold standard method of measuring DA and other neurotransmitters in the brain has been in vivo microdialysis of extracellular fluid (Darvesh et al., 2011). This technique is performed with a probe surrounded by a semipermeable membrane, which is inserted into the region of the brain where DA quantitation is desired (Figure 1). The probe perfuses liquid, which causes the passive diffusion of DA across the semipermeable membrane from the extracellular fluid into the perfused liquid. The probe then collects the perfusion liquid for quantitation. The advantage of this method is that it can be performed in a live awake animal by surgical implantation of the probe into a specific brain region. While the method is powerful and offers immediate measurements in a live animal that can be correlated to behavior, the technique is relatively slow and is not suited to detect rapid changes in DA concentration. To address this, researchers from some labs have developed fluorescent-protein based DA sensors (Figure 2).

In 2018, Lin Tian’s lab has developed dLight1, a molecular tool to detect and image DA in live animals (Patriarchi et al., 2018). Similar to calcium and glutamate sensors, the new dLight1 sensor is a single fluorescent protein-based sensor. This sensor was engineered from a GFP variant and a DA receptor such that GFP fluoresces when the receptor is bound by DA. Two variants of the sensor, dLight1.1 and dLight1.2, exhibit high (submicromolar) DA affinity and high-magnitude responses (increases in fluorescence) at low concentrations (e.g., 100 nm) of DA. In addition, they exhibit fast kinetics (10 ms on and 100 ms off), enabling detection of individual peaks of DA release.

The Tian lab used dLight1 both in brain slices and freely behaving mice to gather the following types of data: 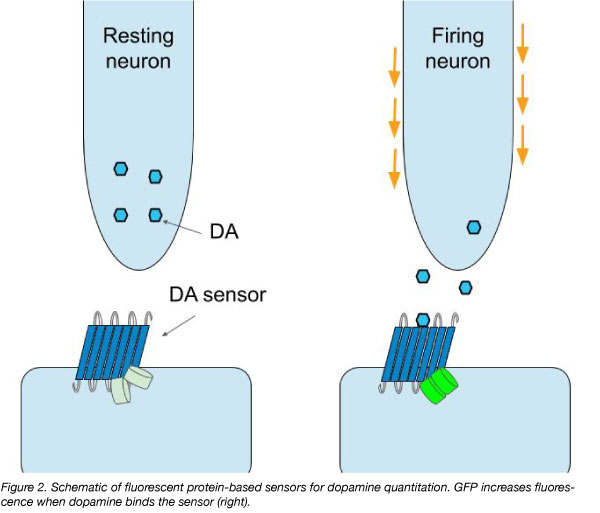 Yulong Li’s lab has created the GRABDA sensor based on a similar strategy: a GFP variant bound to a DA receptor, such that the GFP fluoresces upon DA-receptor binding (Sun et al., 2018). These sensors also exhibit high magnitudes of fluorescent responses. Studies on the kinetics of these sensors showed rapid response (60 or 130 ms on and 0.7 or 2.5 s off, for mouse or human receptors, respectively).

The Li lab used GRABDA in drosophila, zebrafish, and mouse brain slices and freely moving mice to gather the following types of data:

Overall these sensors are powerful new developments in the detection and measurement of neurotransmitters in various species and while exhibiting complex behaviors. Find dopamine and other biosensors in our AAV vector inventory.