RaPID is similar to the BioID platform for identifying protein-protein interactions, but RaPID identifies RNA-protein interactions. Both methods rely on the promiscuous E. coli biotin ligase, BirA*, to biotinylate proteins that are within ~10 nm of the bait, which for RaPID is an RNA motif of interest. See figure 1 below for details on the key components of RaPID. 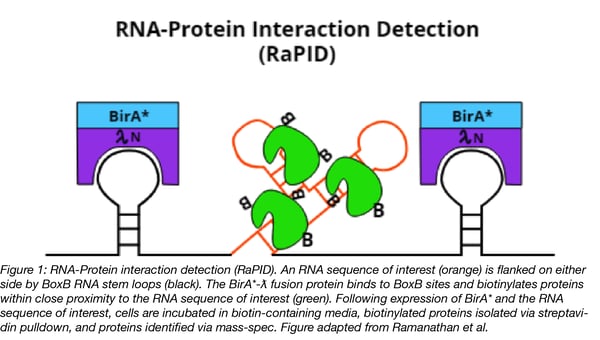 Ramanathan et al. also tweaked BirA* to increase its rate of biotinylation. The improved enzyme, called BASU, is derived from a BirA* homolog found in B. subtilis. BASU was  compared head-to-head with the E. coli and BioID2 BirA*s in the context of RaPID for their ability to detect a known RNA-protein interaction.  In as little was one minute BASU generated a strong streptavidin signal (~250-fold enrichment) when compared to a scrambled RNA motif control). BioID2 had no detectable signal at the same time point. E. coli’s BirA* was tested at its optimum 18 hour time point, but one minute of labeling with BASU still generated a >30-fold enrichment compared to E. coli’s BirA*. Faster labeling kinetics also means that BASU could potentially be used in vivo to study the the role played by RNA-protein interactions in events that occur on a short timescale, such as during drug action or cell signaling.

Like other BirA*-based proximity labeling methods, RaPID cannot distinguish between proteins that directly or indirectly interact with the bait. Also, RaPID can’t be used to study endogenous RNAs at their physiological expression levels; however, knock-in of BoxB sites into endogenous DNA sequences could allow one to study RNAs expressed from their native regulatory elements. 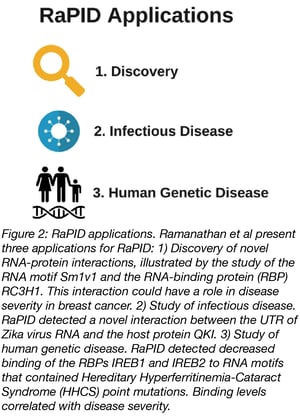 RaPID sounds like a nifty technique, but what kinds of questions can it help answer? Ramanathan et al. outline three applications of RaPID:

These are just three examples of how RaPID can be used to study RNA-protein interactions. Do you have a question that RaPID could help answer? The RaPID plasmids are available from Addgene!