Antibodies are a go-to tool for detecting a protein of interest in cells and tissues. Although antibody production is well established, it’s also a process that’s difficult for individual labs to complete. The nanobody based RANbody platform from the Sanes Lab overcomes this limitation and allows for the flexible design and small scale production of antibodies.

A RANbody is a fusion between a reporter and a nanobody that’s encoded on a plasmid. A nanobody is a ~150 amino acid, single domain antibody. To create their RANbodies, Yamagata et al used previously published nanobody sequences that targeted the following antigens: GFP, RFP,  the histone protein H2A2B, and the actin-binding protein gelsolin, but any nanobody sequence could be used to make a RANbody. RANbodies are expressed in 293T cells and are secreted from cells due to their IgGκ signal peptide sequence, making them easy to harvest from cell culture media. Their His tags allow for further purification, if desired, but it's not required for their use.

Each RANbody is detectable by two different tags: a reporter and an HA tag. The reporter comes in three varieties: HRP, Spaghetti Monster, and the Chicken IgY domain, which are discussed in more detail below. The HA tag can be stained for with an anti-HA antibody and serves as a backup means of detection that’s independent of the reporter. The only caveat is that HA staining is weaker than reporter staining. 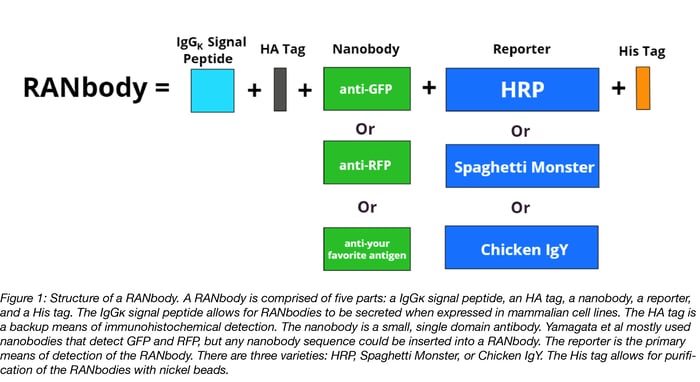 Picking the right reporter for your RANBody

While all three reporters stain cultured cells and tissue sections, some reporters are better suited for particular applications. Read on to learn more about each reporter or check out table 1 for a summary.

HRP tagged RANbodies don’t require a secondary antibody for detection. Instead they are detected with tyramide signal amplification. Tyramide signal amplification occurs when HRP converts a fluorescently labeled tyramide molecule into a highly reactive radical, which is then covalently linked to residues within close proximity thus fluorescently labeling them. HRP RANbody staining results in a ≥10-fold increase in signal over staining with a primary/ labeled secondary antibody and a ≥100-fold increase in signal over intrinsic fluorescence. Increased signal is likely due to lower background and better penetration of the sample due to the smaller size of RANbodies compared to antibodies.

Staining with multiple HRP-RANbodies is indistinguishable since they produce the same signal, so only one HRP-conjugated RANbody can be used at a time. Samples can be sequentially stained with two HRP RANbodies if the sample is stripped. HRP-RANbodies are, however, compatible with most multi-labeling immunohistochemical protocols where either a directly labeled primary or a primary/labeled secondary antibody are used to detect additional antigens.

Are you ready to start making your own RANbodies? Great! All of the RANbody plasmids from Yamagata et al can be found here.

Can’t find a RANbody against your favorite protein? No worries! As more nanobodies are developed, there will be more nanobodies to turn into RANbodies. If you know of a nanobody that would make a useful RANbody, consider leaving a link to its sequence in the comments below.

Looking for primary monoclonal antibodies to use with the secondary nanobody toolbox? Check out the NIH’s Developmental Studies Hybridoma Bank (DSHB). 1 ml of antibody-containing hybridoma supernatant is only $40, significantly cheaper than commercially available antibodies.